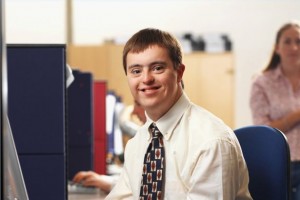 In a powerful profile of his son Jamie, a young man with Down syndrome, Michael Be?rube? explores some of the key challenges that those with disabilities face when trying to enter the workforce:

The first time I talked to Jamie about getting a job, he was only 13. But I thought it was a good idea to prepare him, gradually, for the world that would await him after he left school. My wife, Janet, and I had long been warned about that world: By professionals it was usually called “transitioning from high school.” By parents it was usually called “falling off the cliff.” After 21 years of early intervention programs for children with disabilities…there would be nothing. Or so we were told.

At 13, Jamie reported that he wanted to be a marine biologist. A very tall order, I thought; but he knew the differences between seals and sea lions, he knew that dolphins are pinnipeds, and he knew far more about sharks than most sixth graders. And despite his speech delays, he could say “cartilaginous fish” pretty clearly. Perhaps he could work at an aquarium?

Be?rube? goes on to tell the story of Jamie’s education and upbringing, which includes the unfortunate descent from that lofty childhood dream to his current unemployment at age 22. “By the end of the year [at age 13]…Jamie had lowered his sights from ‘marine biologist’ to ‘marine biologist helper,’ Be?rube? writes. “And by the end of eighth grade…when he was asked what he might do for a living when he graduated, he said dejectedly, ‘Groceries, I guess.’”

Despite testing at rather high levels for his disability, and despite having years of experience working in various low-wage and volunteer jobs, Jamie continues to struggle in his search for a career, even in areas like factory work, food service, or hospitality.

Yet when reading the profile, one can’t avoid being struck by the gifts he has to offer. From his attitude to his ambition to the skills he’s already demonstrated, Jamie has something unique to contribute. “Jamie loved all his jobs, and his co-workers and supervisors loved him,” his father writes. “He is, after all, bright, gregarious and effervescent…He applied himself fully — he is no slacker — and he always took care to do his jobs right.”

The question, then, is whether the market has a place for such contributions:

I knew Jamie would not grow up to be a marine biologist. And I know that there are millions of non-disabled Americans out of work or underemployed, whose lives are less happy than Jamie’s. I don’t imagine that he has a “right” to a job that supersedes their needs. But I look sometimes at the things he writes in his ubiquitous legal pads when he is bored or trying to amuse himself — like the page festooned with the names of all 67 Pennsylvania counties, written in alphabetical order — and I think, isn’t there any place in the economy for a bright, gregarious, effervescent, diligent, conscientious and punctual young man with intellectual disabilities, a love of animals and an amazing cataloguing memory and insatiable intellectual curiosity about the world? (emphasis added)

Unfortunately, many fail to see that those with disabilities have anything to offer, whether in the marketplace or otherwise. With the abortion rate of those with Down syndrome edging 90%, a portion of our society assumes a disturbing mindset of limitation and marginalization toward those with disabilities. Yet, as Jordan Ballor recently wrote, “Each one of us, created in the image of God, has the capacity to be a productive steward of some kind.” God created each of us, and he has blessed each of us with particular gifts, talents, and capacity, regardless of what dollar amount the market does or does not assign to our contributions.

Taking this into account, we also ought not blindly assume that the market is assessing those with disabilities accurately. Is it really a matter of our economy not having demand for Jamie and others like him? Or is it that most of us are stuck in various preconceptions and prejudices, and we need to expand our economic imaginations when it comes to those with disabilities? When reviewing stories like Jamie’s and those of others like him (seehere and here), it seems far from settled that the potential of these individuals is being duly recognized, realized, and rewarded.

Given the transformative power of business and the proven ability of those like Jamie to flourish in such settings, Christian entrepreneurs, executives, and business owners ought to heed these stories and respond in turn, challenging their typical human tendencies to box others in and impose limited notions of “value” on the contributions of others. What we see as a “disability” may very well be the exact opposite.

If given the chance and the investment, Jamie and others like him are bound to surprise us and contribute to our economic future in new and profound ways.

Materially? Perhaps. Before and beyond all of that? Most certainly.