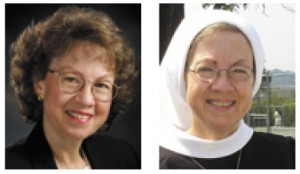 We are all on a journey — the journey of this life.

It begins in the mystery of “not being” before we are conceived, and seems to end, humanly speaking, in the “not being” of death. From dust to dust.

But faith — not precisely scientific, repeatable, experimentally verifiable knowledge, but a type of knowledge nonetheless, the highest knowledge, if the truth be told — informs us that we go from one eternity to another, from the abyss of God’s providence into the abyss of His embrace.

That is the central Christian claim.

It is also the central Jewish claim.

Sharing this essential conviction that life has meaning, that life is willed by and oriented toward a person, that life begins from and ends with a person, Christianity and Judaism are close, intimate, connected, intertwined, always have been, always will be.

This conviction of life’s meaningful orientation has a profound consequence. It means everything, in fact… for persons.

It means that all of life’s most profound realities are protected and defended as real. It means that all of those realities which cannot be weighed, measured, dissected, numbered, and digitalized, which have no weight, mass, energy, heat, or gravity, all those realities which are real only to persons, cherished only by persons — I mean realities like love, like fidelity, like sacrifice, and, the ultimate reality, holiness — are, yes, truly real, though not material.

In fact, not only truly real, but more real than the material.

These person-sensed and person-cherished realities are defended and protected and proclaimed by those who follow the God of Abraham, Isaac and Jacob, the Holy One of Israel.

An essential tragedy of our human history has been the friction, the mutual distrust, the enmity, between Christans and Jews.

It should not be so.

But it has been.

It has marked and marred our history for 2,000 years.

And that is why, when the difficult, mysterious journey of this life leads a member of the Jewish community and faith to reflect, and deeply consider and reconsider, and to convert, to Christianity, it is always a wrenching, riveting, emotion-charged matter.

Very often there is something mystical in these decisions, some sense of having been directly touched in the middle of this life by the One who is there, we believe, before life’s beginning and after it’s end.

It is as if in the midst of the dense matter of this material world, the honey of personhood mystically flows from hidden cracks in the unliving elements, and infuses grace into the thirsty soul of the pilgrim soul. Such moments defy analysis and dissection, although the human mind always seems to seek to dissect and analyze to find out “why” something like this has happened.

Such a conversion is a controversial matter, but its controversial nature cannot be a reason for us to ignore that it can and does occur, that it represents something remarkable and profound, and that it may be a sign for all of us — even if only a sign of contradiction.

And that is why I would like to draw your attention today to the story of a journey which began in Judaism, passed into evangelical Christianity, then into Catholicism, then into religious life, and now into the creation of an entirely new Order of Catholic nuns.

It is the story of a Jewish American woman named Rosalind Moss.

The following is a letter from Rosalind, a dear friend, describing what has just occurred. Mother Miriam of the Lamb of God, as she is now called, is known to many in the Catholic world. Born and raised in a Jewish home in Brooklyn, New York, Rosalind as an adult embraced Jesus as the Messiah of the Jewish people. Her initial conversion interrupted a successful 15-year business career as an executive with corporations in New York and California. She changed course. She began a full-time Evangelical ministry, earning a master’s degree in Ministry from Talbot Theological Seminary. Then, a series of events in the summer of 1990 set her on a  course to find out if the Catholic Church was in fact the Church Christ established 2,000 years ago. After 18 years of Evangelical Protestantism, she entered the Catholic Church at Easter 1995.

Since that time she has traveled the world speaking and teaching through conferences, parish missions, women’s and family retreats, and all forms of media. From July, 1999 to May, 2008, Sister Rosalind was a full-time staff apologist with Catholic Answers and remains to this day a guest of the semi-monthly radio program, From the Heart on Catholic Answers Live. She is the editor of Home at Last, 11 Who found their Way to the Catholic Church, co-host of EWTN’s Household of Faith and Now That We’re Catholic!, host of Reasons for Our Hope: A Bible Study on the Gospel of Luke, and author of the Bible Study book by the same title.

Having been affected in a rather mysterious, negative way as a young Jewish girl in New York by the shortening of nuns’ habits in the 1960s, Sister Rosalind, having now become, as she puts it, the “most Jewish a Jew can be” by becoming Catholic, desires “to restore the hemline to the floor and the habit to the world through an order of Sisters who will reach out to every segment of society as messengers of hope in the midst of world that has lost its way.”

On the Feast of the Queenship of Mary, August 22, 2008, the Daughters of Mary, Mother of Israel’s Hope, took root in St. Louis, Missouri, at the invitation of then Archbishop, now Cardinal, Raymond Burke.

Following Cardinal Burke’s departure to Rome and her own novitiate term, Sister Rosalind, at the invitation of Bishop Edward Slattery, moved to Tulsa, Oklahoma, to establish the community’s foundation in what will become their permanent home.

On the Feast of the Nativity of the Blessed Virgin Mary, September 8, 2011, Bishop Edward Slattery received Sister Rosalind’s Triennial Vows, approved her name in religion, Mother Miriam of the Lamb of God, and decreed the Daughters of Mary, Mother of Israel’s Hope to be a Public Association of the Faithful.

Letter from Mother Miriam of the Lamb of God
September 9, 2011

I’ve just experienced what possibly is the most glorious day of my life. It is difficult for me to recall a more deeply beautiful, heavenly occasion than the taking of my religious habit, name, and triennial vows on September 8, 2011, the Feast of the Nativity of the Blessed Virgin Mary.

I think it is not inaccurate to say that I have lived with a deep longing to belong to God, in a way I could not define, my entire life, though, as a young girl growing up in a Jewish family in Brooklyn, I had no idea Who the Bridegroom was for Whom I longed, nor could I have fathomed a God of such incalculable love and condescension.

It was suggested by a good, wise and holy spiritual director, that the occasion of these, my first vows, take place in a small, humble, quiet setting, and that, my permanent, solemn vows three years hence would be “an ecclesial event.” And so it was: the most glorious day of my life, the fulfillment of long-awaited desires, came to fruition at last, at last, in the small, beautiful Monastery of Our Lady of the Cenacle in Tulsa, under the blessed direction of Dom Mark Daniel Kirby, O.S.B., Prior, together with His Excellency, Bishop Edward James Slattery presiding. Heaven flooded that small monastery which held about 15 in attendance, among whom were priests, religious brothers and sisters, and several oblates of the monastery.

I arrived back in the newly named “Priory of Our Lady of Guadalupe” (our first house in Tulsa) with two new Postulants and with feet that barely touched the ground. My heart was flooded with thoughts of the Incarnation. Did not the most glorious, most momentous event in the history of mankind – the birth of the King of kings, of the God of Abraham, Isaac and Jacob (Whom no man could look upon and live) – take place in a small, humble, quiet setting: a stable, a manger, a feeding troth, with not even 15 people in attendance?

And was not the Cross that followed 33 years hence, the Cross upon which the Lamb came to die, indeed an “ecclesial event” – not only before the multitude on Calvary, but a thousand times more so as that once-for-all eternal sacrifice is brought through time and down on every altar throughout the world, to the end of time.

To my solemn vows three years from now, our dear Lord willing, I will invite “the whole world.” But I cannot imagine it being more glorious than this first (formal) “I do” given through the Shepherd of Tulsa to the Bridegroom of my soul. In the words of a favorite hymn of old:

Were the whole realm of nature mine,
That were a present far too small;
Love so amazing, so divine,
Demands my soul, my life, my all.