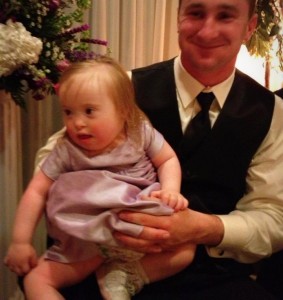 A modern evangelist, Annie basks in Christ’s love and shares it with a simple, winsome touch. A heart overflowing with love is a powerful testimony, I’ve learned.  “We love because He first loved us.” (1 John 4:19). Annie’s love spills over, mysteriously opening hearts long shut to God’s mercy and love.

You’ve got to meet her—so I’ll tell you more about her in a second.

First, a confession. Annie’s love humbles me. It’s so natural, immediate, and unselfish that it stops me dead in my tracks. She’s the perfect foil for my easy self-absorption and carefully calibrated giving, because Annie is never calculating. She reaches out, gives, and loves, without measure.

Meet Annie: she’s almost two, with feathery blond hair, the most beautiful blue eyes, and a smile that lights the sky. She knows sign language and loves music. The cherished youngest of ten children, Annie gives hugs all day long. She also has Down Syndrome.

Ok, she’s cute. But an evangelist?

Yes. From the start, her very existence witnessed to the goodness of all life. When a routine sonogram showed “problems” in utero, the obstetricians sent Annie’s mom for a more precise sonogram in another building. Radiology is on the ground floor. When a sonogram confirms a Down Syndrome diagnosis, a mother need only ride the elevator a few floors up for an abortion.

So convenient. That’s the way it is now.

Women don’t want babies like Annie, so they abort them.

Except that Annie’s mom would never consider it. This was her daughter, after all, no matter what.

A few weeks ago, the New York Times published a reaction to new North Dakota legislation, which outlaws abortions sought because of fetal abnormalities (including Down Syndrome). The writer, Alison Piepmeier, a feminist, gender studies professor at the College of Charleston and the mother of a Down Syndrome child, faults the legislation. In her view, women should be allowed to have abortions “for whatever reason they choose.”

Piepmeier’s research on “reproductive decision-making” found that a woman carrying a Down Syndrome baby typically viewed “the fetus” as a child already, sometimes with a name. Piepmeier defends the decisions of women who aborted their Down Syndrome children, noting that those decisions were “incredibly painful.” (Agonizing over a decision seems to confer moral legitimacy, as least in the New York Times.)

The women in Piepmeier’s study denied that they chose abortion because “they wanted a ‘perfect child.’” Their decisions were justified, in Piepmeier’s view, “because they recognized that the world is a difficult place for people with intellectual disabilities.” One mother called her decision “the protective choice” for her baby.

The reigning philosophy seems to be better dead than disabled.

Annie’s mom also observed that many women who choose abortion because of a Down Syndrome diagnosis do so out of fear and misinformation. Medical doctors don’t do much to allay those fears—partly because they see mostly gloom and doom statistics. According to the National Down Syndrome Congress, “many obstetricians are inadequately prepared to explain a diagnosis of trisomy 21, often using overtly negative language or out-of-date information.” The American College of Obstetricians and Gynecologists (ACOG), for example, targets Down Syndrome (trisomy 21) for routine screening (with termination likely), devaluing the lives of Down Syndrome people and discouraging parents from welcoming them into the family.

What’s to be done?

One of the first press reports after Pope Francis’s election recalled that, as Argentina’s archbishop, he admonished his fellow bishops for their timid, reluctant witness to the Gospel. He said, “Jesus teaches us another way: Go out. Go out and share your testimony, go out and interact with your brothers, go out and share, go out and ask. Become the word in body as well as spirit.”

That’s Annie–the word in body as well as in spirit.

Annie evangelizes wherever she goes, always on-message. Six months ago, she captivated a room full of med students who had gathered to hear how Annie’s mom “coped” with the “burdens” of her Down Syndrome child. After all, Annie’s medical trail was significant, her individuality buried under a litany of diagnoses. To their surprise, these students met a delightful little girl with a “match me” smile.  They learned of her fiercely protective father and retinue of devoted siblings, all of whom delight in teaching, cuddling, feeding, diapering, and—best of all—playing with her. They listened to Annie’s feisty mom and heard, in her infectious laugh and passionate voice, great hope for her daughter’s future. Surely some of these doctors embraced the “good news” about children like Annie.

That’s one of the things Annie does best—spread the good news. Last weekend, she charmed two hundred people at an elegant dinner. Though a guest, she provided delightful, spontaneous entertainment, dancing with her cousins and brothers. Day by day, she stirs the hearts of ordinary people in chance encounters—in the produce aisle at the grocery store, at the snack bar during a local basketball game, and in smiles exchanged during Mass.

She’s cute, not scary. She’s lovable and loving. And she has that mysterious power to stir love in the souls of others, sometimes even in spite of themselves.

She’s “Annie,” not a dreaded Down Syndrome kid. Her life has value, and she’ll wrap you in love if you give her a chance.