Trending Now
You are at:Home»Featured»Awaiting Our Next George Washington
By Tom Purcell on February 22, 2015 Featured, Government & Politics, Humor

“Boy, here’s something we could use more of today: unity among the American people. 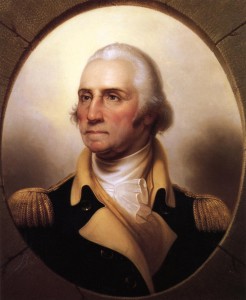 Americans are so divided.”

“Maybe so, but we’ve been divided worse before.”

“Watch the History Channel series ‘Sons of Liberty.’ It dramatizes the heated arguments that took place among Colonial leaders, who had a lot to lose by declaring their independence from King George III of Great Britain.”

“If they were so divided, how did we pull off our independence?”

“We did it the way America has always solved major problems: leadership. Great leaders emerged to guide us. Gen. George Washington offers a fine example. Some wonder how things might have turned out had he not led the way.”

“I knew he was important to America’s Founding, but I didn’t realize he was that important.”

“From early in his life, he was a natural leader. He had an imposing presence, standing nearly 6 feet, 3 inches tall at a time when the average man was about 5 feet, 8 inches. And he was invincible. During one battle in the French and Indian War, four bullets ripped his coat and two horses were shot from under him, yet he remained unscathed.”

“Some fellows are blessed with such luck their whole lives, I guess.”

“In ‘Washington: A Life,’ biographer Ron Chernow shares lots of interesting facts about George Washington. Despite having little formal education — he was the only American Founder who did not attend college — he proved to be a political genius and great military leader. In 1775, he took command of our motley crew of an army and led it in a war that lasted about seven grueling years. And though he made mistakes, he ultimately outwitted the British, won the war and secured American freedom. Some historians think that no other man but Washington could have pulled it off.”

“I imagine he was popular after his war and exploited that popularity to become our first president.”

“Yes, he was popular among the colonists, but he wanted nothing to do with being president. He wanted to retreat to his beloved farm at Mt. Vernon, Va., but duty continued to call. His leadership was needed to help establish our Constitution, which grants power to us little folks. He then became president reluctantly because he knew his leadership was needed to ensure the early survival of our fledgling government. The truth is, he hated being president.”

“The press was vicious by his second term: ‘His opponents accused him of everything from being an inept general to wanting to establish a monarchy. At one point, he said that not a single day had gone by that he hadn’t regretted staying on as president.’”

“Who would have guessed that?”

“He handled his job with grace, however. He was aware, says History.com, that ‘the way he handled the job would impact how future presidents approached the position. He handed down a legacy of strength, integrity and national purpose.’”

“Too bad modern presidents don’t hand down such things anymore!”

“Washington paid a big price for his leadership and service. He almost went broke from all his years of public service. Land-rich but cash-poor, he had to borrow money to attend his own inauguration. After eight long years as president, he finally returned to his beloved Mt. Vernon to farm and enjoy life. But he lived only three more years, dying at the relatively young age of 67.”

“That’s regrettable after all he gave to his country.”

“Yes, but the point is, America may be divided at the moment. We have major problems looming. But I’m placing my bet on America. It’s just a matter of time before the country that produced George Washington gives us more men and women of integrity to do what great leaders always do: bring us together and overcome our seemingly impossible challenges.”