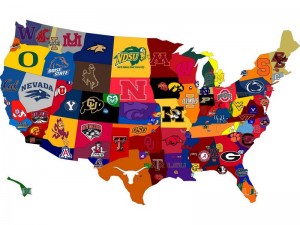 If you are still following along, then you can answer in the affirmative. According to a recent CNN article, however, a surprising number of the college athletes we watch playing basketball or football can only answer in the negative (“Some college athletes play like adults, read like fifth-graders”). At one university however, UNC-Chapel Hill, the evidence appears to be even more daunting, where a graduate student researcher reported (in a controversial research project that has been recently suspended by the university) that “between 8 and 10 percent were reading below a third-grade level.”

Of the 38 public institutions CNN attempted to survey, 18 provided no data. Some of these claimed that they do not track the aptitude scores of their athletes. (Really?) Others refused the request. Yet others failed to respond. Of the 20 who responded, 13 provided data in a standardized format that enabled the researchers to compare the results. In the worst case, one university reported that 25 percent of its athletes participating in revenue-generating sports were reading at a level below that of “college literacy.” At the other extreme, one university (Wisconsin) reported that less than 2 percent of the athletes were below the standard on their reading skills. The other universities reported that between 7 and 19 percent failed to achieve this minimal standard. An additional seven universities provided some data, but in a format that did not allow for standard comparisons.

Although the report is very concerning, I was especially interested and shocked that one of the large public universities that chose to respond used scores from the Wide Range Achievement Test (WRAT) rather than the SAT or the ACT.

The list of approved tests was longer before June 2009, when a number of tests (including the WRAT) were removed from the approved list. When I inquired about the reason for the change, the representative of the Pennsylvania Department of Education noted that while the WRAT includes a test of reading recognition, it does not include a test of reading comprehension, and on that basis, was removed from the approved list. I agree with that decision. In the approved test that I currently use, I observe a few students who are able to read the words presented to them, but are unable to consistently identify the correct meaning of the sentences they have read.

In the CNN story, a major public university is evaluating the reading skills of its college athletes using a test (WRAT) that is considered by the Pennsylvania Department of Education to be insufficiently diagnostic in assessing the reading skills of third, fifth, and eighth grade homeschooling students. Apparently at this particular university, reading recognition is sufficient; reading comprehension is too much to expect.

If it is indeed true that many college athletes are reading at the fifth-grade level (and some not even that), then there is something terribly wrong with education in America. Colleges, instead of focusing on college-level skills, are forced to remediate high school (and even middle school) skills. As a result, many colleges are pressured to award college credit for work that is not truly representative of college-level performance. It is essential that professors demand college-level work, in the same way that it is essential that homeschooling families expect age-appropriate skills.