Trending Now
You are at:Home»Featured»Christian Conservatives and Randians
By Dr. Mark W. Hendrickson on April 19, 2011 Featured, On TV and Movies, The Economy 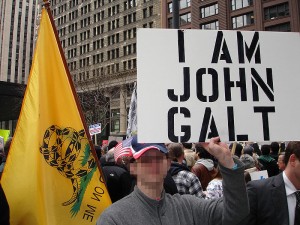 According to a 1991 Book of the Month Club / Library of Congress survey that asked what book had most influenced their lives, the two top picks by respondents were the Bible and Ayn Rand’s Atlas Shrugged. Coincidentally, this is a big week for both Christians and Randians. The former are celebrating the resurrection of Jesus Christ; the latter, the long-awaited release of the film version of Atlas Shrugged (part one of three).

On the eve of the film’s April 15 release, I was half of a panel discussion on Atlas Shrugged at a gathering of young professionals in Pittsburgh. I focused on economic and political themes in Rand’s writings. As a former socialist who now espouses genuine free-market capitalism (not today’s counterfeit version), I esteem Atlas Shrugged as a brilliantly insightful work of politico-economic fiction. Rand’s grim depiction of self-serving political opportunists progressively destroying the economic motor that sustains human life is uncannily accurate, astute, and timely, despite having been written over 50 years ago.

The other speaker at the Pittsburgh event was a very kind, gracious, and bright professor — a philosopher who is an adherent of Rand’s comprehensive philosophy, called “Objectivism.” For those of you not familiar with it, one of the fundamental tenets of Objectivism is atheism. Consequently, dialogs between Christians and Objectivists are relatively rare, so I am glad to report that the Pittsburgh panel shared by a Christian economist and Objectivist philosopher was friendly and respectful.

We were able to pull it off because we largely stayed away from areas of irreconcilable differences — specifically, beliefs about ultimate causes. Instead, we made common cause in addressing the huge threat to all of us of an aggressive political class bent on demolishing property rights, redistributing wealth, and absorbing the private sector into a centrally planned people’s republic.

This gives me hope that a tactical alliance between Christian conservatives and Objectivists can be forged, since we both seek to reverse the progressive loss of liberty in the United States. We Christians shouldn’t expect Objectivists to accept the reality of the God that we know as an immanent spirit, but Who does not appear on earth as an objective reality. Nor should Objectivists expect Christians to accept some materialistic hypothesis about the origin of the visible universe, such as the fantastical “Big Bang” theory — a belief that requires one willfully to overlook the reasonable but problematical question, “Where did the primordial ball of gas come from?”

We Americans have a long and proud history of overlooking religious differences while collaborating to produce a more prosperous society. What one believes about God or how one conceives of ultimate causation cannot be enforced by government. It is a matter of what the Puritans called “liberty of conscience.” How Americans treat each other, by contrast, is inevitably a public matter. A society must hammer out rules for what is and is not permissible in how we interact with each other.

Commonly shared ethical principles form the basis for our Constitution and laws. Christians who correctly understand the Bible’s teachings about private property unite with Randians in believing that every individual’s property rights should be inviolable. Rand’s statements in Atlas Shrugged about the legitimate sphere of government power are virtually indistinguishable from certain principles expressed in the Declaration of Independence.

For the time being, let’s set aside our differences. The problematical relationship of Christians and Objectivists reminds me of the friction that so often divides economic conservatives and libertarians, limited-government classical liberals and anarcho-capitalists. All of these believe that government is far too big today. Yet they waste far too much energy quarreling with each other when they could expend that energy far more productively in working to roll back Big Government. Their mutual priority should be to get rid of 75 percent of the federal leviathan. Then, after having achieved that much freer and more prosperous state of affairs, have a royal donnybrook to decide what to do about the remaining 25 percent of Uncle Sam.

Similarly, I see conservative Christians and Objectivists as potential allies in the “good fight” for smaller government and a restoration of individual rights, united by a commonality of ethics. In the short run, there is an immediate, desperate need to pry government’s grip off of our country’s economic windpipe before it chokes us into serfdom; in the long run, metaphysical questions about ultimate reality, the creative force, and accountability may be the most important. But, let’s first make common cause to thwart those whom Rand dubs “looters” and “cannibals”—those who are bleeding our wealth and devouring our rights. Later, in a United States liberated from suffocating government, there will be a more advantageous time for interested parties to have a knockdown, drag-out debate about God and creation.

both deeply loved the United States of America. May those who walk in their respective footsteps today also love the United States enough to forge an alliance, not of convenience but of necessity, to rescue our country from her destroyers and to resurrect liberty and restore our fundamental rights.