Trending Now
You are at:Home»Learn & Live the Faith»Evangelization»Confessions of a Publicly Grumpy Mom
By Terri Kimmel on December 12, 2014 Evangelization, Featured, Live in Christ, Parenting, Vocations, Women 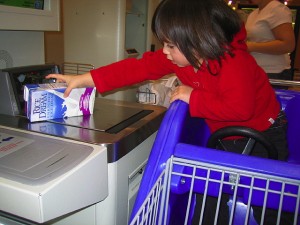 Milk and toothpaste. That’s all that was left on my shopping list as I maneuvered myself, two shopping carts (one of the race car variety) and my five youngest sons toward the back of our local supermarket. The oldest boy was big enough to push a cart, only occasionally racing down an aisle or bumping into the back of my ankles. Thus far I had managed to avoid the restroom rodeo: that business of holding open the men’s room door and shouting into the abyss of strange men and hand dryer noises to get my boys to come out while keeping my aspiring-shopping-cart-diver three year old from jumping head first toward the tile floor.

As I plowed through the store behind a cart burdened with heavy canned goods and two children followed by an entourage that included the “race car,” I saw a friend of mine getting eggs. We stopped to chat, blocking the milk case. I was herding kids, trying my best to enjoy a rare opportunity for adult conversation, and enduring the annoyed looks of other store patrons who had to squeeze in to get their gallon jugs out of the refrigerator case. My friend commented about how “brave” I was taking five boys to the store and I admitted that I’d probably need a nap that afternoon. It’s true. Any mom can tell you that taking one child to the store is exhausting. Five is five times as exhausting, at least for me.

Scenarios like this, intensely stressful and tiring, used to also be accompanied by a mind game I’d play with myself. You see, tragically, I used to be a regular reader of other homeschool moms who would write about their experiences and insist that we mothers of large families “put on a happy face” when we’re in public. We’re the image of the big family for our modern culture, they’d insist, and we have to convey the joy and the peace we have raising our children. I bought it for a long time, despite how confusing it was.

When out of the house, I’d work really hard to only speak kindly to my kids and in a disciplined and serene tone of voice. I’d be extra sweet and patient with my children while in the company of strangers and then be totally spent by the time I got home because so much of my energy had gone into worrying about what other people thought of us.

I got over all that playacting about seven years ago. I don’t remember any particular event that was the catalyst. Maybe it was my oldest child’s becoming a teen. I just got tired of being a fake. Don’t get me wrong. I do work hard to be a kind and fair mom. I adore my children. They and their father are everything to me. It’s just that I realized that I was lying by being someone else in public, and at the same time I realized that it’s not a crime for me to get stressed and even somewhat grumpy with my kids in front of other people. It’s natural. It’s normal. It’s real.

Long ago when I had only two preschool-aged children, our family moved to a new town and another mom took me under her wing and befriended me right away. She had five children at the time and was homeschooling them. She and her husband were both very intelligent and driven people who had chosen to live a simple life centered on their family. He was a small-town attorney and she a stay-at-home mom. Being with her and seeing her struggle, seeing her get frustrated and cry sometimes, was a turning point in my own parenting.

Before that time I had thought my two children were all that I could handle and I didn’t want any more. I was sure. I thought that mothers of large families somehow had a grace that God had not chosen to give me. Those other mothers had it easier or had some mental endurance I was lacking. I wasn’t intended to have more children, I’d tell myself. If I had been intended to have more children, having two wouldn’t be so hard.

Being with my friend caused me to question myself. I saw the beauty of her family life, the peace I wanted, but I saw her struggle too. I saw her sometimes get grumpy and speak with a harsh tone to her children. Sometimes she’d raise her voice or be disgusted. She didn’t hide it from me and it changed me. Through my friend I was confronted by a new concept of parenting.

This new idea was something gritty, challenging, and uncomfortable. What I saw in my friend was a willful, intentional, peaceful endurance, despite sometimes feeling inadequate for the task or feeling like her family obligations were too big or too heavy. In her I saw holiness. In all its intimidating, frightening, uncontrollable, wild unpredictability, I knew I wanted it too. I wanted to be holy like her.

Today I’m the mother of nine living children, two more lost in second trimester miscarriages, and a grandmother to a child in the womb. My life is full and rich and joyful. Even so, sometimes I feel overtaxed and overwhelmed. I get grumpy. Sometimes I’m even grumpy in public. Thanks to my friend who provided the impetus for my paradigm shift and to the unrelenting love of the Holy Spirit, I’m okay with that. I know being occasionally out of sorts is inherent in seriously undertaking my vocation as wife and mother. I trust in the mercy of God and I don’t care so much if I’m the world ambassador for large families. I just want to fulfill my vocation to the very best of my ability, and even if I’m grumpy toward my kids in public, that’s good enough.