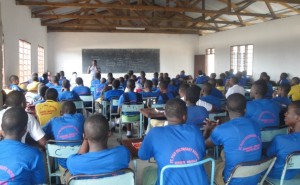 I visited St. Pius High School last week, located on the outskirts of Dar es Salaam, Tanzania, to teach about 100 students a sex education lesson focused on chastity. The headmaster of the school invited me to come give this lesson as the parents wanted teaching that reflects their traditional and faith values. Children in Tanzania are mostly taught a values-free “comprehensive sex education” that has been part of school curriculum since 1992. This “education” has had a disastrous effect on the morality of the community.

It seems the earlier it is introduced (in Tanzania it starts from primary 4, equivalent to grade 4 in some countries) the earlier children begin to engage in sexual activity. Parents and teachers are noticing more pregnancies in school children – most of which end in abortion. Baby dumping, though not currently widespread, has been a cause for concern in the society. Moral values are almost disappearing among the new generation kids. And religious observance has dramatically declined.

During my lesson, I talked about the sacredness of human life and the respect human life deserves. I also taught them why abortion and contraception have always been wrong and sinful. Finally, I challenged them to embrace the virtue of chastity for their own good and for the good of the society and future generations.

Sex education was also a topic on my talks on Upendo Radio FM, which is owned and managed by the Evangelical Lutheran Church in Tanzania. For six weeks now we have focused on “Comprehensive Sex Education and its Damaging Side Effects to our Children.” This is a live talk show, and the participation of listeners has been very impressive — they ask questions, give recommendations and give advice to parents regarding the best ways to raise their children. This week we talked about “why contraception,” which is part and parcel of sex education as a population control tool. I invited Halima Waziri, a victim of contraception herself, to give witness. Halima Waziri received a Depo Provera shot while she was in high school. The contraception promoters told students that if they wanted to “realize their dreams” they should practice “safe sex” – that is sex without pregnancy or STDs. Halima and others did not realize the health risks that accompany contraceptive use.

After just two shots, Halima experienced excessive bleeding that eventually caused her to lose consciousness. She became very sick and was hospitalized for two months. Her education suffered, which affected her employment, and she physically suffered from being misused by sexually immoral men. Halima, like many other young women, was not “empowered” by contraception. She became a victim.

Halima eventually visited the Human Life International office in Tanzania where for several days she received counseling and healing. She found peace of heart, and therefore decided to remain and help us as a volunteer, and later as a paid worker. Learning from HLI and our commitment to saving human life based on the principles of Catholicism, Halima decided to convert. Now she is undergoing Catechetical training, and in March 2014, God willing, she will be baptized and confirmed. She has chosen the Christian name Rose.

I thank God for this great miracle and pray for the healing and conversion of all young women victimized by the Culture of Death.

This article is courtesy of Human Life International.