Trending Now
You are at:Home»Featured»Crisis in the Central African Republic
By ACN-USA News on December 11, 2013 Featured, Those in Need 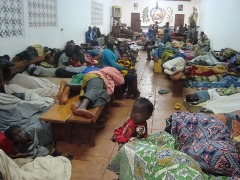 Just recently, Pope Francis said that the Church should be a “field hospital.” In the Central African Republic, this is now everyday routine. Thousands of people have sought shelter in the mission stations and monasteries. The Carmelite monastery in the capital Bangui has also been turned into a refugee camp. Normally the monastery is a place of silence. Now the cries of hundreds of children can be heard day and night.

“The French are here! At last!” Fighter jets break through the clouds in the sky above the Carmelite monastery. The people applaud spontaneously. Father Federico Trinchero, the 35-year-old Prior, is close to tears. Perhaps help is on the way … A few hours earlier panic had broken out in the district where the monastery is located. Shots could be heard, and women grabbed their children and ran. More than two thousand people sought refuge in the monastery.

“On Friday morning, we had celebrated Holy Mass for the many people who had been killed in the recent days.  Just as I was preparing breakfast, I was called to the gate. Standing there were masses of people who had fled to us. We took them in with open arms,” the Italian Prior said.

But the monks suddenly faced an enormous challenge: “I counted the people discreetly so that no-one would think we wouldn’t be able to find room for them. But it was clear to us that we could provide for the people at the most for one more day. We weren’t able to leave the monastery to buy food since it was too dangerous out there. We called everyone possible: the Archbishop, the nunciature and the French embassy to get help, but the situation was no different anywhere else.”

Yousuf, a Muslim friend of the monastery who ran a chicken farm nearby gave the Fathers 2000 eggs he was unable to sell at the market at this time. “We used these to make pancakes for the smallest children,” Father Federico explained with evident pleasure. Later Yousuf brought a sack of rice, a sack of sugar and a vat of oil. “We got the children to stand in rows to wash their hands before each of them was given a pancake. We have 800 children under twelve here and many pregnant women.”

The young Prior had not dared to ask the people who had fled in panic about their histories. “I smile to stop me weeping too much,” he confessed.  Only a few days before, the Archbishop of Bangui, Dieudonné Nzapalainga, had used his Advent message to do some straight talking about the atrocities committed by the Séléka rebels, who had been instilling fear and terror in the country for a year.

He denounced the abductions, mass executions and looting. In residential areas even anti-tank weapons had been fired. He described that in many places decaying and decayed corpses were lying around on the ground, providing food for the vultures and wild animals. In addition, people who had been tortured were “bound in a bestial fashion” and thrown into the river to “die there in agony, with no chance of warding off their inescapable death.” Hundreds of thousands of people are on the run. Since the UN Security Council agreed last week to reinforce the presence of French troops in the country, people dare to hope that this nightmare will come to an end.

Monastery life in Bangui is anything but normal nowadays. “We celebrated morning Mass outside so as not to awaken the 350 children sleeping in the chapel. Two of them were even lying under the altar,” Father Federico reported, visibly moved.

The monks are on their feet day and night. “I met Brother Léonce, who comes from Rwanda, sweeping the corridor at five in the morning. I told him he should rest but he told me that he himself had been born in a refugee camp in the Congo, since his family had fled from the genocide in Rwanda.”

“I am so proud of our Brothers. Brother Cedric is a doctor and cares for the sick. Brother Mathieu runs the kitchen in a way that not even a mother could. The others help distribute the foods, bring water, take care of the hygiene, register the refugees and look after them in every respect. They all work so hard!”

For many refugees, there is a happy ending: “A father came to us with a small baby. By the evening we had eventually managed to find his wife. And little Fatou finally found her parents again on Sunday,” Father Federico recounted, clearly gratified.

The Fathers sing the words of the psalm: “He will defend the afflicted among the people and save the children of the needy.” The cries of the little children blend into the singing. In the sky the French aircraft drone.  “God Saves” is the name of a little boy who has only known fear.  Will there soon be peace?

With image of the Carmelite monastery in Bangui in the Central African Republic, which has been turned into a refugee camp for some of the thousands of people who have sought shelter (© ACN).