Trending Now
You are at:Home»Featured»Dropping the Benghazi Ball
By Dr. Earl Tilford on May 13, 2013 Featured, Government & Politics, International Issues 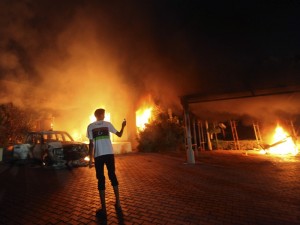 In the 1990s, the U.S. Air Force’s self-descriptor for its capabilities was “Global Reach, Global Power.” On September 11, 2012, as Americans were being attacked and killed in the Middle East, the global reach of air power was confined to the un-refueled combat radius of F-16 fighter jets. Additionally, the F-16s at Aviano, Italy apparently needed several hours to be combat ready. Hours . . . on the anniversary of 9/11.

Four decades ago, after returning from a tour as an intelligence officer in Southeast Asia, I reported to the Intelligence Early Warning Center (INEW) at Headquarters, Strategic Air Command (SAC). Warning centers existed at headquarters throughout the U.S. military and at the Intelligence and Research Branch in the State Department, at the Central Intelligence Agency (CIA), the National Military Command Center (NMCC) in the Pentagon and the White House. Secure Teletype machines connected SAC INEW to the warning centers at CIA, Defense Intelligence Agency (DIA), National Security Agency (NSA), and the NMCC. INEW also communicated via secure telephone with every other intelligence warning center as well as the NMCC and White House. The word “FLASH” put watch officers in instant contact with the right party.

An American ambassador under attack at a U.S. consulate in a Muslim country would have generated a “CRITIC message” from the appropriate embassy. The reception of a CRITIC in INEW, at whatever hour, required the senior watch officer contact the SAC Director of Intelligence who then decided how to handle it. Had Benghazi occurred on September 11, 1972, 40 years ago, warning centers in Washington and at SAC Headquarters would have gotten the message in mid-afternoon on a weekday when all hands were on deck to make decisions. Appropriate area specialists would have been contacted within seconds of the CRITIC’s arrival. In the case of Benghazi, the Department of State was critically affected.

Had the Benghazi attack occurred on a date as auspicious as 9/11, every U.S. intelligence warning center would have been on a heightened state of alert. We were especially attentive to dates marking events like the Tet Offensive of 1968, birthdays of leaders like Mao Tse Tung, the start of the Korean War, etc. We knew our enemies: the communist countries and terrorists ranging from the Baader Meinhoff Group in Germany to the Palestinian Liberation Organization in the Middle East. Forces appropriate to cover contingencies would have been on alert, ready to respond. Intelligence officers also studied mistakes from Pearl Harbor in 1941, TET-68, and the capture of the USS Pueblo a few weeks later.

According to recent Congressional testimony, the State Department knew about the September 2012 Benghazi attack around 3:00 p.m Washington time. All hands were on deck in Washington, DC, including area specialists at every intelligence agency. Supposedly, the national security advisor was at his desk in the White House. News that terrorists were attacking a U.S. consulate with the ambassador on the premises should have gone directly to Secretary of State Hillary Clinton. A secure phone call to the White House, possibly vetted through the national security advisor, should have followed. If it didn’t, someone was inexcusably inept.

Evidently, the extent of the Air Force’s global reach must have shrunk considerably in the past few years. Although the Benghazi attack started after duty-hours at Aviano, it should have taken less than an hour to prep F-16s for combat. Any weaponeer would have known to load highly accurate munitions sufficient to take out small targets without risking collateral damage. Our pilots are experienced at supporting troops in contact with enemy forces. The internal M61 Gatling gun spews 1,000 rounds per minute. Although F-16s carry only a few seconds worth of ammunition, it’s enough to decimate the half-company of terrorists involved at Benghazi. Remarkably, on the anniversary of 9/11 U.S. fighter planes in the Mediterranean area were so unprepared for combat it would have taken “several hours” to get them over Benghazi. Although USAF tankers were unavailable, F-16s could have refueled at Italian air bases in southern Italy. Did anyone ask?

Ineptitude and lack of ability to respond resulted from a policy mindset unwilling to acknowledge words like “war or terror” or “Islamic terrorism,” despite the reality of the continuing war with al Qaeda and its affiliates. Our armed forces had appropriate capabilities but couldn’t use them. Why?

The tragedy at Benghazi resulted from dereliction of duty spawned by an inane sense of political correctness coupled with determined deference to political expediency emanating from the highest levels of the Obama administration.