Trending Now
You are at:Home»Fiction, Poetry & Humor»Poetry»Poem: “Else but Melancholy?”
By Robert Struble, Jr. on June 22, 2014 Poetry 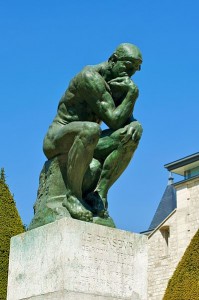 Stay abreast of the current events,
Otherwise, they say, to all intents,
You’re just a citizen in ignorance;
To national progress, a hindrance.

But what if this “progress” should devolve,
Into fiendish ways that involve,
Vice, sleaze and a spiritual squalor,
Loathsome to any Christian scholar?

Why do we go in quest of the facts,
If they surely act like a sort of tax –
Like a duty bound to lay bare
Scenes of dreadful and cheerless care?

What if corruption confronts your kids,
Pleads for and pushes what God forbids;
Befouls, barbarizes, and demeans,
But touts the force of U.S. Marines?

If a country of neon and chrome
Yields empire abroad, sin at home?
If God is cast from the public square
And schools never hear a formal prayer?

If “In God We Trust,” as mottos say,
With thousands aborted day by day?
If I watch the news and see the gays
Cavort and marry and garner praise?

Why then, I ponder, must we apprise,
Our hearts of data that demons devise?
Why should malaise stifle our breath,
Imbue our brains with marks of death?

Why? – Since Jesus himself chose the pain.[I]
And there comes a point when comfort’s insane.
Melancholy above infernal,[II]
May God direct to things eternal.

[I]Luke 12:50. “I have a baptism to be baptized with,” said the Lord Jesus, “and how distressed I am until it is accomplished.” The NAB translates it, “how great is my anguish….”  In the Beatitudes (Matthew , 5:4,6), he also blesses “those who mourn, for they will be comforted,” and “those who hunger and thirst after righteousness, for they will be filled.”  Consistent also with melancholy among grace filled Catholics are the 5 Sorrowful Mysteries of the Rosary.
[II]“’I say that the end of a civilization is the scene most imbued with melancholy for men.  The possibility that a civilization should die doubles our own mortality.’” Jose Ortega y Gasset, quoted in Santo Mazzarino, The End of the Ancient World, (NY: Alfred A Knopf, 1966), pp. 170-71.