Trending Now
You are at:Home»The Catholic Family»Education»Extraordinary Form Comes to the College of Saint Mary Magdalen
By College of St. Mary Magdalen on November 15, 2011 Education, Featured 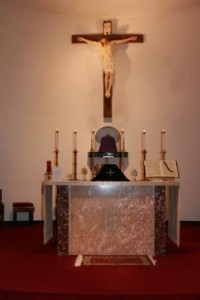 According to the College’s chaplain, Fr. Neil J. Roy, who likewise teaches theology and liturgy on the faculty as an associate professor, the team of servers assisting at the Missa cantata were deeply impressed by the dignity of the more solemn form of Mass. “The heightened reverence of the rite itself is undeniable,” commented Fr. Roy.  “The faithful in attendance at the midday Mass in the extraordinary form registered their strong support of this form of Mass. They remarked quite positively on the chaste beauty and sobriety of the Requiem Mass, and mentioned how moved they were by the reverent gestures and movements of the acolytes and master of ceremonies.” A schola cantorum directed by Mrs. Debbie Harne chanted the propers (Introit, Gradual, Tract, Sequence, Offertory, Communion) and ordinary (Kyrie, Sanctus and Benedictus, Agnus Dei) of the Mass, as well as the responses.

Since Pope Benedict on July 7, 2007, issued his motu proprio Summorum pontificum, and its accompanying pastoral letter Con grande fiducia, the College has sought to answer the Pope’s invitation “generously [to]open our hearts and make room for everything that the faith itself allows” by welcoming and indeed encouraging its chaplains and visiting priests to celebrate Mass according to both the ordinary and extraordinary forms.

With the arrival in September 2011 of the College’s new chaplain, Fr. Neil J. Roy, students at the College will be able to participate in the usus antiquior on a regular basis. “I welcome the opportunity to learn how to pray this form of Mass and to learn how to serve it,” says Joseph Gonzalez, a graduate of the Lyceum in Cleveland, Ohio, and currently a freshman in the Great Books Program. “This was the first time that I had seen black vestments worn by the priest at Mass; and I have been going to church all my life. The austere beauty of the extraordinary form taught me that Church knows how to mourn in a fitting way, so although the Mass itself does not change structurally, yet because of the dramatic expression of mourning, by means of the somber vestments, the chants and the generally subdued tone, the liturgy drives home the gravity of the occasion. In a particular way on the feast of All Souls, it reminds us of the Church Suffering.” “These days [of All Saints and All Souls]are days of great love,” said Dr. Mary Mumbach, Dean of the College’s Cowan Program.

The College of Saint Mary Magdalen has always striven to celebrate its liturgies with great reverence and beauty.  Students kneel to receive communion and sing the ancient chants of the Church. Plainchant, sacred polyphony, and congregational hymns all contribute to the rich liturgical and musical patrimony cultivated in the College and embraced by the students.

Beginning with fall 2011, all Masses at the College are now celebrated ad orientem. As Fr. Roy explains, “In the case of liturgical orientation or the celebration of Mass facing eastward, the rising sun (oriens) serves as a natural icon of the risen Christ (Oriens) who is the Sun of Justice (cf. Malachi 4:2). The earliest extant ‘house of the church’ (domus ecclesiae), discovered in the ruins of a Roman garrison town on the fringes of the ancient Roman and Persian empires, features the altar facing east. Jews turned toward Jerusalem; Christians turned toward the east, in order to welcome the rising sun as the image of the Risen Son.” Fr. Roy clarifies a common misconception about liturgical orientation: “The claim, advanced in the last half century or so, that the priest is turning his back on the congregation” when praying ad orientem, misses the point that the priest is leading the pilgrim people of God toward the new and eternal Jerusalem, of which the sanctuary is the liturgical image. The priest who celebrates the sacred liturgy ad orientem is no more turning his back on the congregation than are the people in the first ten pews of the church or chapel turning their backs on the rest of the congregation.”

The spiritual lives of the students at the College are nurtured through a variety of sources:  chapels with the reserved Sacrament stand at the center of each residence and give students convenient access to the Lord’s Eucharistic Presence around the clock.  Students also have the opportunity to pray the rosary in common daily as well as Lauds and Vespers in the main chapel.

The collegiate community structures its days and academic year around the liturgical calendar:  Mass is offered throughout the week and Holy Week, the Sacred Triduum, and the Easter Octave are celebrated as a community in the fullness of its liturgical and musical splendor.

Graduates of the College, through their catechetical, theological, and, most importantly, liturgical formation received as students, continue to carry out the Holy Father’s liturgical renewal in their own parishes after graduation.

The College of Saint Mary Magdalen remains one of only 20 colleges in the U.S. to be named to the Newman Guide to Choosing a Catholic College (www.thenewmanguide.com).   The College offers a classical liberal arts education—through its Cowan Program and its Great Books Program—rooted in Catholic social teaching and loyal to the Magisterium of the Catholic Church.