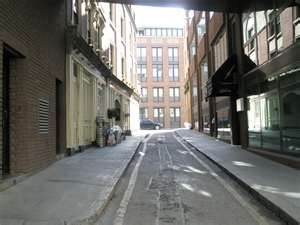 brownie batter from a wide bowl. Dusk settled first around skyscrapers and funneled

down to the brownstones and nondescript buildings which housed businesses below

The stars flew open and shone from the canopy, rolled back in special brilliance tonight,

“The Heavens are telling the Glory of God,” the young rabbi recited in Hebrew, looking

up, adjusting his shifting fedora. It was a ‘Ruach’ night – when the breath of Yhwh, the

Spirit, flew uncontrolled, unexpected. Rabbi Rosen could smell it in the air, a

scintillating sensation which ran up his spine and out over his fingertips, creating

sport coat. The Ruach made him want to skip and twirl, even if ostensibly only to the

polka music drifting over the cement and chain link fence of St. Stanislaus on the

Gentiles dancing and singing. A good time to cross the empty street and walk home on

the far side. He stepped through the dark between trash cans and slammed against a

suddenly solid shadow, which sprawled into the semi-dark street with a shriek of

arm to the figure in the street. At that very moment, a street light above him sputtered

and flickered to life, revealing the victim of his untimely crossing.

It was a woman.

out in the street. “Let me help you.”

“Rabbi?” The voice was sweet and simple, but tinted with pain which marred its texture

like a fork on non-stick cookware. Bent over with arms extended, he paused to listen.

The Ruach slid over his shoulders and ran down his arms, leaving a trail of

between them. Rabbi Rosen sat suddenly on the curb and lowered his arms with care,

as if they were not his own.

“You look like it.” She smiled, dimly, pain flecking her eyes. “But don’t touch me.” She

was a young woman, maybe twenty? Twenty-one? Something was strange about her

clothing. A dirty gray over-sized t-shirt covered her on top, and her skirt looked for all

the world like another t-shirt which she had stepped into upside down, the sleeves

serving as leg holes and the waist tied closed about her own. Her bare feet were filthy,

he noticed. In fact, all of her was filthy, even the dark brown hair which escaped from a

makeshift ponytail at the back of her head.

“At least let me help you up,” he started forward again, but she held up a palm as she

struggled to an upright position, then wiped her hands on her t-shirt skirt.

“Uh uh. No. See?” She twisted her arm and her neck to squint at a bloody scrape

down the back of her forearm. “I’m bleeding. And,” she turned back to him without

expression, “I have my period.”

He looked at her questioningly.

“Well, you can’t touch me, right? Aren’t you ‘unclean’ if you touch blood, or a woman on

her period? Wouldn’t you have to do, like, a week-long purification if I made you dirty?”

“Who told you that?”

“I took a Judaism course in college.”

He stepped toward her, off the curb and into the empty street. “You went to college?”

She slid herself backward slightly. It was a barely perceptible move, but Moishe Rosen

saw it and froze.

“Sorry.” He held both hands toward her, palms up, in a gesture of harmlessness. “I’m

not going to hurt you. What’s wrong with your knee?”

Eyes fixed on him warily, she made an offhand gesture at her right leg, stuck out at an

awkward angle like it was in quarantine — swollen, black and yellow. “It’s a mess.”

“What happened?” He stepped forward again, then checked himself as she pulled away,

sucking in her breath and gritting her teeth against the pain of moving the limb.

“I was in a fight.” She was crab-walking toward the curb away from him, using both

hands and one foot. The injured leg dragged. He watched pain play over her face.

“What happened to the other guy?” he chuckled, trying to lighten the mood as the

woman eased herself gingerly onto the curb into the shadow of a trash can.

“He’s out there,” she muttered, tight-lipped.

“He’s out there? You mean someone did this to you and got away with it?” The Rabbi

“You can’t go back to someone who does this to you!”

“More like I can’t keep away from him. I don’t run so fast, anymore.” She leaned her

head back on the trash can, and Rabbi Rosen heard the ragged breathing of tears

among the garish polka music echoing down the twilight street from St. Stanislaus on

He sat down near her, but far enough to avoid triggering the protective startle which

jolted her when something neared the injured limb.

“Can you tell me?” He asked gently.

“Tell you what? The purpose and meaning of my life?” she spat.

“I told you, I was in a fight. I lost, and a big iron crowbar won, but they didn’t figure I

could still climb out the window. There was an dumpster full of rotting food from the

Chinese restaurant downstairs that caught me when I rolled over the sill. I crawled

three blocks through the alley on one knee. Kind of hard to miss a girl wearing only a

tank-top, so I stole two shirts from one of those street-vendors and crawled into a hole.”

She jerked her thumb. “Under a pile of junk at a demolition site over there.”

Rabbi Rosen knew where without looking. He had passed that broken-down building a

She looked up at him. “I stayed there three days. Four times, I watched his car go up

and down the alley, looking for me. But they didn’t get me. They couldn’t get to me.”

She laughed mirthlessly, looking up at the steady stars.

“The @#!& who promised me a modeling contract. The ones who have, like, four girls

up there, and that’s not counting the rest of the places they’ve got around this city. Like

twenty other houses, or something.”

“Whatever. Selling girls to be sex slaves. Killing them for no reason!” Her eyes grew

Shudders rocked her body, making the trash can rumble against the cement like an

“They’re going to find me and kill me. They probably already killed Rashida because I

ran away.” She was strangely dispassionate. Like she didn’t remember he was there.

“God,” she whispered. “Where is God while they do this to us?”

Rabbi Rosen lunged to his feet.

He squatted in the street beside her, extended a scarred hand, and touched her hair.

“Daughter, he said firmly, “I will never leave you or forsake you.”

Scooping her up gently in the heavily knotted arms of a laborer, he stepped onto the

sidewalk and moved gracefully along the street, her feather weight and awkward, angry

knee no impediment to his progress. At the gate of St. Stanislaus, paused and peered

he lowered her to the ground, just inside the gate.

“You’ll be alright, now, Beloved.” He looked at her. And smiled. She followed him with

her eyes as he crossed the street and strode into the gloom, the fronds of his prayer

shawl visible, white in the darkness.

“Lord, have mercy! Honey, what happened to you? Bill! Get Bill! Doctor Bill, come

A crowd of brightly colored ladies descended on her, as Rabbi Rosen intended. Indeed,

the parishioners of the old Polish Church knew the meaning of mercy.

The Ruach blew with breath like a sweetly scented breeze. It wrapped around Rabbi

Rosen and wreathed him in the perfume of the righteous.

There was no need to purify himself, after all.

This story originally appeared at www.marvelouslybeautiful.wordpress.com.