Trending Now
You are at:Home»Learn & Live the Faith»Apologetics»From Scrupulosity to Lutherosity, Part 1
By Trent Beattie on October 31, 2011 Apologetics 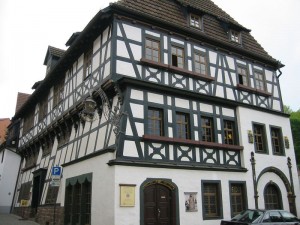 Many people admire Martin Luther (1483-1546) for his defiance of Church authority in the name of religious freedom. The idea is that Luther stood up to overbearing Church leaders who were no more than pagans in disguise. Luther freed us from unlawful intrusion in the area of conscience, which is supposed to be left to the individual, after all. Because of Luther, 1500 years of religious repression have been broken and the individual is now free from unnecessary and harmful religious laws, the story goes.

This story needs a reality check, however. The reality is that Martin Luther suffered from scrupulosity, which is a tendency to see sin where it does not exist, or to see mortal sin where only venial sin exists. In psychological terms scrupulosity can be defined as Obsessive Compulsive Disorder geared toward religious matters. Anxiety can fill the mind of the scrupulous to such an extent that everything they do appears to them as sinful.

In fact, those things which are most helpful to the soul — the Sacraments of Reconciliation, Holy Communion, and prayer, for examples — often become the things most feared by the scrupulous. Take the example of Reconciliation. One can become so anxious before participating in this sacrament that what is a sin and what is a virtue become nearly indistinguishable. An examination of conscience can go on frantically and indefinitely, only getting worse the more it is prolonged.

A swarm of “maybe”s pester the mind:

For the scrupulous who get through the confession, the time after absolution can be a frightful trial as well. The challenge is to calmly say or do the given penance and move on with the rest of the day, despite a possible compulsion to go back to the sacrament to make sure the penance was remembered correctly, or to tell a sin or a detail of a sin forgotten at the time of the confession. There may even be a compulsion to do the entire confession over.

Obviously this is not a good thing in itself, but like any other problem, scrupulosity can be used to make good come about, by the grace of God. In fact, many of the saints have suffered from the disorder at times in their own lives, but they did not let it get the best of them. St Ignatius Loyola (1491-1556), St Alphonsus Liguori (1696-1787), and St Therese of Lisieux (1873-1897) are a few of the more well-known saints who have battled scrupulosity. St Katharine Drexel (1858-1955) is an example of a saint from our own time and country who fought through the clouds of scrupulous doubt.

Martin Luther describes his own scrupulous conscience as an Augustinian monk in his Commentary of the Epistle to the Galatians (1535), saying that:

When I was a monk I tried ever so hard to live up to the strict rules of my order. I used to make a list of my sins, and I was always on the way to confession, and whatever penances were enjoined upon me I performed religiously. In spite of it all, my conscience was always in a fever of doubt. The more I sought to help my poor stricken conscience the worse it got. The more I paid attention to the regulations the more I transgressed them…

Some of you may be thinking, “Well there you have it — Luther’s problem was the Church’s harsh rules, and the way he became free was by breaking off from the tyrannical Church.”

Did the Augustinian Rule include making lists of sins and always being on the way to Confession? Of course not. So why did Luther say that he tried to live up to the “strict rules of my order” and then go on to name two rules that were not in the Augustinian Rule?

The simple answer is this: because the scrupulous see sin where it does not exist, it only makes sense that they see obligations where they do not exist. A sin is a breaking of a commandment of God, or in other words, it is not meeting up to what one is obligated to do (or to refrain from doing). Thus the close connection between sin and obligation. In the mind of the scrupulous, sin is everywhere, which is another way of stating that unmet obligations are everywhere.

The simple rule that a doubtful law does not bind the scrupulous conscience would have helped Luther greatly if he had followed it. St Thomas Aquinas (1225-1274) tells us that “If an opinion is probable, it is licit to follow it, even if the opposing opinion is more probable.” Similarly, St Alphonsus Liguori tells us that “an uncertain law cannot impose a certain obligation,” so there is no requirement for the scrupulous to follow a law that does not certainly exist.

Also of note here is the fact that St Thomas of Villanova (1488-1555) was an Augustinian monk during the same time as Luther. They lived under the same Rule, yet one man became a saint, the other a colossal heretic. Why was this? The difference was not the Rule, or even Church teaching in general, but how they dealt with these things. A striking difference between the two men was that St Thomas humbly obeyed Church authority while Martin Luther proudly disobeyed Church authority.

St. Thomas did not want to have the great burden of being a bishop, but accepted his assignment to the See of Valencia, Spain out of humble obedience. Luther on the other hand, proudly disobeyed Church authority and set himself up as his own master, doing what St Bernard described with sharp disapproval: “He who constitutes himself his own master, becomes the disciple of a fool.”

Foolish indeed was the man who said the following in Against the Spiritual Estate and the Bishops Falsely So Called in 1522:

…I now let you [bishops]know that from now on I shall no longer do you the honor of allowing you — or even an angel from heaven — to judge my teaching or to examine it. For there has been enough foolish humility…and it has not helped… For since I am certain of [my teaching], I shall be your judge…so that whoever does not accept my teaching may not be saved — for it is God’s and not mine. Therefore, my judgment is also not mine but God’s.

We will see in part 2 of this story how Luther’s pride was not at all wise, and how it led him to be the cause of so much harm to so many other people.