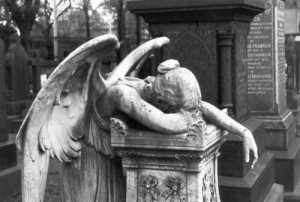 Within hours of the shooting at Sandy Hook Elementary School pro-lifers began assigning causal rootedness in the culture of abortion. I’ve heard several people, some of whom are pro-lifers, object to making a connection. So the question needs to be addressed. Given the highly charged political and moral dimensions of the abortion debate, those most directly involved would not be entirely wrong to suspect some of hijacking their traumatic loss and the monstrousness of the experience. “Emotional Vampires,” was the label given by one critic. Harsh words for sure, but accurate?

Analysis of a tragedy on such a scale requires a great deal of information about what shaped the mind of the murderer. Only then can one assign causality along a continuum from most proximal to most distal. In this case that may take several months, as the media cannot be trusted to report factually or accurately, as evidenced by their having gotten wrong everything but the number of victims.

The connection, therefore, has to do with the coarsening of the culture, of which abortion is just one of many factors. When we discuss the Culture of Death, we discuss all of those factors which lower regard for the value, the dignity of the individual human life:

And that’s the short list. One could itemize hundreds of social justice issues that contribute to the coarsening of sensibilities regarding the worth of a single human life. That said, there can be no doubt that a nation having killed 56 million babies in the womb, regarding it with a blithe, business-as-usual attitude has diminished the worth of the individual.

Those are 56 million choices. It is the choice of the mother, enshrined in law, that determines the humanity of the child of the womb. If the mother decides otherwise then murder isn’t murder, because it’s her choice. No sane or rational argument can ever make that acceptable, and the insane and unthinkable is now a part of the fabric of American life.

In other words, we have, “Defined deviancy down,” as the late Senator Daniel Patrick Moynihan put it.

In other words, we have a new norm for human worth. It isn’t intrinsic, but contingent.

Contingent on the belief and will of the mother.

Contingent on the belief and will of the state.

Contingent on the belief and will of the employer.

Contingent on the belief and will of the lab researcher.

Contingent on the need for spare body parts.

The error of contingency of human worth is a mistake that we just can’t seem to escape. In slavery, segregation, eugenic sterilization, ethnic internment camps, and abortion, all have been supported by majority opinions by the U.S. Supreme Court. In every case the culture of the day was coarsened by the injustice, which left its muddy footprints all over the American landscape.

All of that said, there is a time and a place for everything. We’ll have plenty of time to debate it all after the funerals. For now, we need to wait on law enforcement to give us the most proximal causes for this tragedy. That may take quite some time. Most importantly, we need to lift up this community in prayer and give them the physical and virtual space to grieve.

Join the Coming Home family here tonight for Day 4 of our Novena to Our Lady of Lourdes for Healing.