Trending Now
You are at:Home»Featured»Kaline, Colavito & Cash: The Boys of October
By Dr. Mark W. Hendrickson on September 28, 2011 Featured, Sports

“The one constant through all the years, Ray, has been baseball.”
—Terence Mann (played by James Earl Jones), Field of Dreams 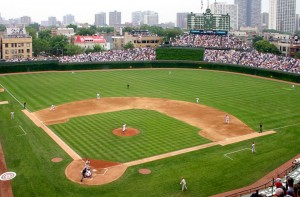 For over 100 years, baseball has been a cultural reference point for millions of Americans. Just as certain songs are associated with special times in our lives, so many of us remember our past in terms of: “That was the year Player A or Team B did this or that.”

Having grown up three-and-a-half miles north of the Detroit city line, I have been a lifelong Tigers fan. It has been a half-century now since that magical 1961 season when the Tigers, led by the awesome trio of “Kaline, Colavito, and Cash” in the heart of their batting order, made a legitimate bid for the American League pennant for the first time in my living memory.

As October approaches and baseball fans root for the team they want to win the World Series, it is also a time for nostalgic reminiscences. Here are some of my dearest baseball memories:

As a kid, I rooted for National League teams in the World Series to beat whatever team (usually the hated Yankees) had beaten my Tigers in the American League. Thus, I exulted when Lew Burdette won three games to lead the Braves to victory over the Yankees in 1957. The Soviets launched Sputnik during the series.

I thrilled when a now-forgotten pitcher named Larry Sherry led the Dodgers to victory over the White Sox in 1959, pitching in four of the six games, saving two and winning two. (Sherry also batted .500 in one of the great individual series performances of all time.) In the game-six finale, the Dodgers’ Hall-of-Fame manager, Walter Alston, did something that you’ll probably never see again. He handed the ball to Sherry, his closer, in the fourth inning, and watched Sherry blank the ChiSox for the rest of the game.

In 1960, I had the privilege of watching Ted Williams play at Tiger Stadium. The Splendid Splinter is the greatest hitter I ever saw. His presence in the batter’s box was majestic; he was lord of that domain. My other 1960 highlight was Bill Mazeroski’s walk-off homer to complete the David-beats-Goliath upset victory of the Pirates over the Yankees—the most exhilarating moment in World Series history.

In 1961, my beloved Tigers made their move to get into the Fall Classic. Norm Cash led the league, batting .361 with 41 homers. Hall-of-Fame right-fielder Al Kaline was third in the league in hitting. Rocky Colavito, who rivaled Kaline for having the best throwing arm of all American League outfielders, batted cleanup and clubbed 45 homers. (Incidentally, Colavito had the most poetically rhythmic name in pro sports: Rocco Domenico Colavito.) The pitching staff was led by Yankee-killer Frank “Taters” Lary (23-9), future Hall of Famer and U.S. Senator Jim Bunning, and the crafty southpaw Don Mossi.

Unfortunately for the Tigers, the Yankees were even better. Their ace, Whitey Ford, had his best season, winning 25 games and losing only four. Most of Ford’s wins were closed out by Luis Arroyo, a journeyman pitcher who had the season of his life, setting what was then the major league record for saves in a season: 29.

The Yankee’s batting order in ’61 was deeper than the Tigers’. Plus, the heart of their lineup was—I have to admit—as formidable as Kaline, Colavito, and Cash. The Yankees’ three-, four-, and five-spot hitters consisted of two Hall of Famers, Mickey Mantle and Yogi Berra, and two-time MVP Roger Maris, who made history that year by belting 61 homers.

I watched in awe on Sept. 16 in Tiger Stadium when Maris smashed his 57th home run off the facing of the third deck in right field. At the time, many fans felt that breaking the 60-homer barrier in a 162-game season (Babe Ruth’s record was set when the season lasted 154 games) somehow tainted the accomplishment. Now that it has been a half-century since anyone has hit 60 homers in a season without being juiced on performance-enhancing drugs, we can see what a truly rare and monumental achievement it was.

The 1961 Tigers won 101 games, finishing 40 games over .500, but the Yankees pulled away from them in September, winning 109 games and then the World Series in five.

Seven years later, led by Mickey Lolich’s three complete-game victories, the 1968 Tigers fulfilled my lifelong dream by winning the World Series over Bob Gibson’s Cardinals in seven games after being down 3-1. They won it again in 1984, then lost the series in 2006. Now they’re back in the post-season, and although other teams (notably the Phillies) are stronger on paper, the team that does the best between the foul lines wins the championship.