Trending Now
You are at:Home»Columnists»Learning to Sing Like Saint Caedmon
By Jake Frost on November 26, 2011 Columnists, Featured, Parenting 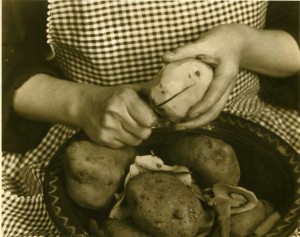 Children have a way of reaching into your heart to find love you didn’t even know was there.  I was working away in the kitchen, trying to cook dinner and get the dishes done at the same time, when my daughters came in looking for Daddy.

“What are you doing, Daddy?” Liz, our older daughter asked.

“Are those our plates you’re washing?” Liz asked.  “Can I help?”

Liz reached for her stool so she could move it to the sink to help me.  And whenever Liz is on her stool, her sister wants to climb up, too.

I was feeling too busy for help from two little people just then.

“I’ve got to get these dishes done,” I told them, “and peel these potatoes to get them boiling.”  I grabbed a potato and held it up to show them, and was on the cusp of saying something like ‘so I don’t have time right now,’ when suddenly the sight of stool and ‘tater combined together to trigger a flash of memory transporting me back to when I was a kid and used to walk into my Mom’s kitchen while she was working.  No matter how busy Mom was, she never told me she didn’t have time.  She would stop what she was doing to talk to me.  If she had to keep working, she’d cut me a slice of raw potato and sprinkle salt on it and tell me to grab a seat on the stool that was in her kitchen and then she’d talk to me while she worked.

I stood momentarily frozen, transfixed by a long lost memory.  Where that little fragment of my past had been hiding amid the jumbled closets of my brain I have no idea.  I hadn’t thought about it in years and I didn’t even know I had such a memory.  But in an instant, I was right back to Mom’s kitchen, seeing it all from the vantage point of that old stool while savoring the satisfying crunch of a potato slice.

I saved myself some future regret by silencing the words that had been about to form on my lips and instead said:  “Hey, I’ve got a special treat for you two that you haven’t had before.  It was something I used to love when I was a kid.”

I cut them potato slices, sprinkled a little salt on top, and they sat on their stool eating their new treat, looking happy and enjoying a chat with Dad.  Our younger daughter’s feet were swinging back and forth.  She’s still so small her feet don’t touch the ground when she’s sitting on the stool.  When I looked down at her she held her potato slice out to me with bright eyes and exclaimed:  “Dadda!”

I turned back to the dishes, and looking at the windowsill above the sink another piece of my childhood came back.  My Mom had such a windowsill and I remember a small brown vase she kept there.  Times when I needed a little more than a potato slice, Mom would dry her hands a kitchen towel, turn off the stove and say:

“Why don’t we fill our little brown vase.”

She’d take me out and sit in the yard with me, combing through grass and clover hunting for violets.  Then Mom would tie our flowers together with a blade of grass and put our diminutive bouquet in the tiny brown vase.  It always made me happy to see it, and violets are still my favorite flower.

It was another bit of long-ago that I didn’t know I was still carrying around.  It reminded me of Mother Francis Raphael, O.S.D.’s description of St. Caedmon’s transformation in her book Catholic Legends.  Mother Francis Raphael related how Caedmon, a shy and “dull rustic hind”, was awakened one night by an angelic visitor as he slept in the barn with the animals he cared for.  The visitor told him:  “Sing to me of the beginning of created things.”  Caedmon abjured, saying that he couldn’t sing, and besides he didn’t have any schooling, he was just a laborer, he couldn’t compose a song.  “Nevertheless,” the visitor told him, “sing to me of the beginning of all created things.”  And so Caedmon tried, and to his astonishment, as he began he found within himself experiences to draw upon to sing of the glory of God’s creation. As Mother Francis Raphael described it:

Then Caedmon felt a marvelous change in his soul:  thoughts and shapes came flocking on his mind, and they were not so much new things as old things with a new light shining on them and making them glorious.  The images traced in his memory through the long years he had spent in the broad forests and healthy uplands of his native land, seemed to start up fresh and beautiful within him.  He heard the larks caroling sweetly in the morning air, as they were wont to do when he went early into the plough-field; and the mystic glory of many a sunset swam in golden floods before his eye, which he had been used to watch as he plodded home from his daily labour, scarcely knowing how much of their beauty was sinking into his soul.

Looking at the surprises I found within my memory, I had to wonder what made the images of those moments “sink into my soul” like the beauty of Caedmon’s sunsets, to be dug out again by my own kids decades later.  And I realized that it wasn’t so much the potatoes or violets, beautiful as those things can be.  It was the love behind those actions, those choices, that made those moments shine.

Scripture tells us:  “Were one to offer all he owns to purchase love, he would be roundly mocked.”  Song 8, 7.

You can’t buy love.  Not for yourself, not for your kids.  You can only choose love by choosing to love.  That’s what love is in the end:  a choice.  Keep my focus on my own concerns – whether chores or whatever else it may be – or give my attention to my kids.  The world is full of enticements to keep our focus on ourselves:  career, free-time, prestige, romance, vacations, new cars.  Whatever the form, the ultimate invitation is the same:  choose the self over the other.  As parents, we have to decide – over and over again — whether we’ll care more about ourselves, our own interests, our own desires, or we’ll love our kids more.

As Bruce Marshall put it in Father Malachy’s Miracle, it is the Christian challenge of “serving others and not self . . . a commandment so difficult that even the saints of God boggled over it.”  For we parents, the others we are called to serve are first and foremost our children.  It’s a grand calling, worthy of the saints.  In giving us this task, God must know there is more in us than we might suspect.  As St. Augustine wrote:  “Do not you believe that there is in man a deep so profound as to be hidden even to him in whom it is?”  If you’ve ever walked in a room and seen the little faces of your kids light up, and heard their giggles and exclamations of “Daddy!” as they jump up to run to you, and bent down to scoop them up in your arms . . . well, if you’ve felt that, you know St. Augustine was right.  There’s a greater depth of love within than we imagined.  It’s there just waiting for us, if we are willing to try, as St. Caedmon was, and make the choice for love.