Trending Now
You are at:Home»Featured»New Monastery in the Holy Land
By ACN-USA News on June 4, 2011 Featured, Those in Need 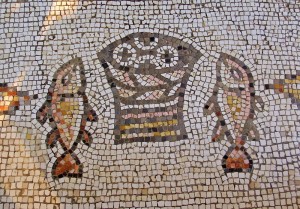 Monks living at an important biblical site will be leaving their earthquake-prone monastery for a new home – thanks to help from Catholic charity Aid to the Church in Need (ACN).

ACN, which is helping with the building of a new monastery in Tabgha, Israel, received a progress update on the construction work from Fr. Jeremias Marseille OSB, a member of the German Benedictine community living there. Based on the shores of the Sea of Galilee, the monks are custodians of the Church of the Multiplication of Loaves and Fish, which marks the site of the biblical miracle.

In an interview with ACN, Fr. Jeremias gave two reasons for moving the monastery, which was built without proper foundations in the 1950s, to a new site. 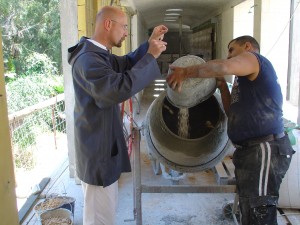 He said, “The first is that the house in which we live is not safe – in Germany it would have been condemned. The rooms have all cracks of 45° in the walls and the house is moving, as we live in an area of earthquakes at the beginning of the Jordan valley.”

“The second reason is more important, we not only need a house – we need a cloister where the monastic life can increase and grow.”

He described how the monks need a place for retreat and reflection, not only because of the high volume of pilgrims and tourists each day – which at the peak can reach up to 5,000 – but also because of their ongoing work providing a meeting place for young people with disabilities from Israel and the West Bank. Fr. Jeremias described how it is important to withdraw to a quiet place and seek God, which the monastery will provide through its new oratory (chapel).

He said, “The opening words of Jesus in the miracle of the multiplication of loaves and fish are: ‘Come away to some lonely place all by yourselves and rest for a while, for there were so many coming and going…’ [Mark 6:31].” 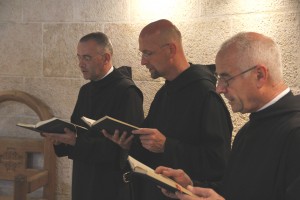 ACN is supporting the building project with more than $70,000 to build the oratory, which the Benedictine monk described as “the heart of the new monastery.”

Fr. Jeremias said, “Monks and guests need a room where, both day and night, they can find a quiet place to pray which is set apart from the crowds in the surroundings.”

The oratory will be air conditioned, which is essential in an area where outside temperatures can reach 122°F during the hottest part of the day in the summer. The new building will also be able to withstand the earth tremors that periodically affect the valley. According to Fr. Jeremias everything is going according to schedule and work on the oratory will begin soon. He said, “The construction is going well, we are almost finished with the cells. Then we will start the west-wing of the new monastery including the new oratory. We hope and plan to finish the skeleton construction work of the whole monastery in October, and we hope to move in at the end of May next year.”

The monastic house at Tabgha is located on the north-western shore of the Sea of Galilee and is a dependent priory of the Dormition Abbey on Mount Zion in Jerusalem.

The new building is a community project by the German Association of the Holy Land and the Benedictine Monks.

The Church of the Multiplication of Loaves and Fish which the Benedictines look after was built in 1982 by the German Association of the Holy Land on the site of a Byzantine church destroyed in 614 by the Persians. The current structure incorporates the remains of the mosaic floor of the 5th century church. The oldest written record of the site dates from the end of the 4th century, which describes a small Syrian Church, built over a holy stone, which became an altar commemorating the miraculous multiplication of food by Jesus.