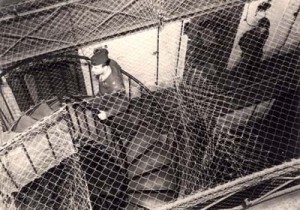 “Just existing became what was important,” says 87-year-old Frank Kravetz of Pittsburgh, captive of the “hell-hole” that was Nuremberg Prison Camp. “Yet even as I struggled with the day-to-day sadness and despair, I never once had any regrets that I signed up to serve.”

An extended tour of Nazi camps as a wounded POW scratching for survival wasn’t what Frank had in mind when he signed up to serve his country in World War II. He refused his parents’ wishes to stay home; they already had two sons overseas. Frank was eager to fight for the freedom his Slovakian parents had secured in America. It was the least he could do.

Francis Albert Kravetz was born October 25, 1923, in East Pittsburgh, near the Westinghouse plant that provided income and aspiration for an entire community. Every morning he shoveled soot that drifted onto the porch from the steel mill. He lived a happy life. But then war came. Frank enlisted in the Army Air Corps. If he was going to help Uncle Sam beat the Nazis, he would do it from an airplane—and he did it very well, as a tail-gunner.

Frank’s life as a soldier took a dramatic turn on November 2, 1944 in a bomb-run over Germany. He crammed into the tail of a B-17, wedged inside a flak jacket. The target was Merseberg, a major industrial area. He flew amid an air armada of 500 heavy bombers—each carrying eighteen 250-pound “general purpose” bombs—escorted by 900 fighter planes.

While the Americans were ready for business, so was the Luftwaffe, which set aside every aircraft to defend Merseberg. Frank’s plane came under hot pursuit by German fighters. Frank took them on with a twin .50 caliber machine gun manned from the tail. It was a dogfight, and Frank was shot and badly wounded. His B-17 was filled with holes, the engines destroyed. The crew had to bail, quickly.

Frank was bleeding profusely and could barely move. His buddies tried to get a parachute on him, but it opened inside the plane. They wrapped it around him, taking care not to cross the chords, and tossed him out. To Frank’s great relief, the chute opened. Instantly, the deafening chaos quieted, and Frank floated like he was on the wings of angels.

The tranquility halted with a rude thump as Frank hit the ground and tumbled like a shot jackrabbit. German soldiers seized him.

How did he survive? “All I can say is that the good Lord was watching out for me,” Frank says today.

Liberation came April 29, 1945, by General Patton’s 3rd Army. Grown men wept with joy, embracing their liberators, falling to their knees. Frank was among them; that is, the 125 pounds that remained.

Frank returned home to Pittsburgh, hitchhiking all the way from New York. He unceremoniously arrived at his folks’ door, no trumpets, no dramatic background music. He hugged his mom and dad, went inside, and sat down.

Frank soon thereafter married his sweetheart, Anne. They’ve been happily married ever since. He also got active as an ex-POW, eventually becoming national director of American Ex-Prisoners of War.

I talked to Frank one day last August. We chatted about a friend of his who had recently died, another WWII veteran gone. I told him it was critical that vets like him relay their message to the current generation.

Frank needed no convincing. “The current generation,” he said, frustrated, “they don’t know!”

To ensure they know, Frank wrote a book, a riveting account of his ordeal, titled, Eleven Two: One WWII Airman’s Story of Capture, Survival and Freedom. The title refers to November 2, a date with multiple meanings in Frank’s sojourn.

Assisted by his daughter, Cheryl, the book is a vivid account of the nitty-gritty, day-to-day details of an American POW held by Nazis, from the monotony to the terror, from the hunger and wounds that wouldn’t heal to the rock that was his faith.

Frank is now willing to share. There are others like him, and they won’t be around much longer. A decade or two from now, they’ll be nearly extinct.

If you know a Frank who hasn’t told his story, help him. Get a pen, a video camera, whatever, and get him talking. As Frank says, “they don’t know.”

They need to know. Men like Frank Kravetz have no regrets, but we’ll regret not pausing to record their history.

Editor’s note: A version of this article first appeared in the Pittsburgh Tribune-Review.