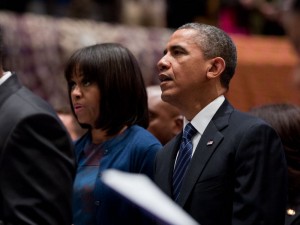 Let’s Have a Different Conversation

At the National Prayer Breakfast last week, 52 of the 2,878 words spoken by President Barack Obama set off a firestorm in the world of journalism and social media. Many conservative Christians were offended by his contention that the actions of Christians in fighting the Crusades, conducting the Inquisition, and justifying slavery and Jim Crow laws in America were morally equivalent to some of the current atrocities being committed by Muslims. Opinion pieces in leading magazines and newspapers defended or criticized the president’s argument and discussed why it provoked such great outrage.

One commentator contended that religious conservatives were also upset by Obama’s claim that doubt plays an essential role in Christian faith. The president declared that “the starting point of faith is some doubt—not being so full of yourself and so confident that you are right and that God speaks only to us, and doesn’t speak to others.” To support Obama’s position, an “Atlantic Monthly” correspondent cited a similar statement by Pope Francis: “The great leaders of the people of God, like Moses, have always left room for doubt. You must leave room for the Lord, not for our own certainties; we must be humble.”

In editorials, op-eds, and comment sections and on blogs and Facebook, many Americans protested that Obama’s remarks were inappropriate given the United States’ separation of church and state and pined for presidents who would refuse to attend or at least speak at the National Prayer Breakfast (which they have consistently done since it began in 1953; in fact, the event was called the Presidential Prayer Breakfast until 1970). Presidents have clearly believed that they have the right, just as all other Americans do, to express their religious convictions at such gatherings. Moreover, in numerous speeches in varied settings, many chief executives have testified to their own faith, celebrated the nation’s religious heritage, and evoked God’s aid in times of crisis and calamity.

However, rather than joining the debate over Obama’s analysis of the role Christianity plays in promoting violence and condoning racism, the importance of doubt in Christian faith, or the right of a president to discuss his personal religious views, I want to focus on a different issue. Instead of arguing about these three issues, having a national conversation about a theme Obama spent much more time on—how to remedy the social ills that plague our world—would be much more constructive.

The president argued that faith inspires people “to feed the hungry and care for the poor, and comfort the afflicted and make peace.” He urged his listeners to be true to God, “His word, and His commandments.” He quoted the Jewish Torah, the Islamic Hadith, and the Christian Bible to emphasize that the Golden Rule is central to all three religions. Obama challenged people to love one another more fully and “to see our own reflection in each other.” As he has done in more than 80 speeches during his presidency, Obama exhorted Americans to be their “brother’s keepers and sister’s keepers.”

“As children of God,” Obama asserted, “let’s work to end [the]injustice” of poverty, hunger, and homelessness. “No one should ever suffer from such want amidst such plenty. He urged people to defend “the dignity and value of every woman, and man, and child, because we are all equal in His eyes, and work to end the scourge and the sin of modern-day slavery and human trafficking, and ‘set the oppressed free.’”

Obama quoted the admonition of Micah “to do justice, and love kindness, and walk humbly with our God” (6:8), the comforting words of Isaiah that those who hope in the Lord “will run and not be weary, and walk and not be faint (40:31), and the Apostle Paul’s counsel to “put on love” (Colossians 3:14). He concluded that on earth we will never fully fathom God’s “amazing grace” or “awesome love.”

Obama’s staunchest critics view such statements as disingenuous, as pious platitudes designed to please a religious audience and deceive the public about his true beliefs. No matter what his true intentions were, these are Obama’s remarks that we should be discussing. Today one out of five people on our planet live in extreme poverty, more than 800 million people suffer chronically from hunger, and about 160 million children under the age of five are stunted in their physical development. The world’s richest 85 individuals have about the same amount of wealth as the poorer 50 percent of the world’s people combined. An estimated 35 million individuals are victims of human trafficking. According to a recent study, in the United States, 23 percent of children live in poverty and one in 30 children were homeless at some point in 2013.

Thankfully we are making progress in reducing the scourges that afflict humanity today, but we still have a long way to go. We clearly have the resources to alleviate these social evils. What we lack is the will to do so. So let’s shift our national discussion to the more important issue of how people espousing different faiths and ideologies we can work together to remedy these ills.