Trending Now
You are at:Home»Featured»Our Lady of All Nations: Approved?
By Kevin Symonds on August 6, 2012 Featured, Vocations 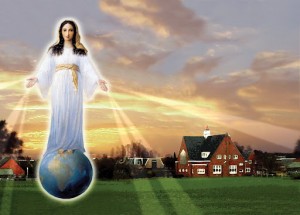 From 1945-1959, Mrs. Ida Peerdeman of the Diocese of van Haarlem (Amsterdam) claimed to receive private revelations.  The claims became known popularly as “Our Lady of All Nations” or simply “Amsterdam.”[i]

The case was examined by the local Ordinary of van Haarlem, Bishop Johannes Huibers, who decided the claims were not supernatural in origin.  His decision was affirmed in May, 1974 by the Congregation for the Doctrine of the Faith (CDF) in a Notification.[ii]  The Notification ordered the immediate ceasing of all publications on the claims.  Efforts to rehabilitate the claims began sometime after the Notification was issued.

On May 31, 1996, the above efforts led the new Bishop of van Haarlem, Henricus Bomers, to approve the devotion to Our Lady under the title of “Our Lady of All Nations.”  He fell shy, however, of approving the alleged messages attributed to the “apparitions” to Ida Peerdeman.  The document approving the devotion but not the alleged messages was undersigned by Bishop Jozef Marianus Punt—then auxiliary of van Haarlem.

On July 21, 2001, Bishop Punt succeeded Bomers after the latter’s death in 1998.[iii]  Less than a year later on May 31, 2002, Bishop Punt declared the “apparitions” to Ida Peerdeman to be supernatural in origin.  A subsequent development, however, questions Bishop Punt’s authority in this matter. 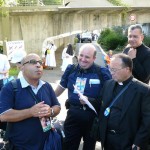 In September, 2008, Msgr. Charles Scicluna, Promoter of Justice for the Congregation for the Doctrine of the Faith, was present at the 22nd Mariological Congress in Lourdes, France.  He delivered an essay on the Church’s 1978 Norms of discerning presumed apparitions and revelations (“Normae S. Congregationis” or simply “NC”).  In 2010, the essay was published in the scholarly journal of the Pontificia Academia Mariana Internationalis for the general public.[iv]

In his essay, Scicluna states once a decision of the CDF is rendered on an alleged private revelation, the decision is of “undisputed hierarchical authority,” meaning a lower authority cannot overturn it.  Interestingly, within this section Scicluna provides a footnote citing the “Our Lady of All Nations” case.  He says:

Scicluna’s point raises some questions: First, if the Congregation for the Doctrine of the Faith issued a negative judgment on the Amsterdam claims, did the local Ordinary, Marianus Punt, have the requisite authority to declare the claims to be supernatural in origin in May, 2002?  Given the hierarchical nature of the Congregation’s Notification, one would have expected Punt to say something of this matter in his May 31, 2002 letter but strangely he did not and there is nothing elsewhere in any of the literature about it.

Was the case of Our Lady of All Nations approved?  It appears as though there are some explanations in order.