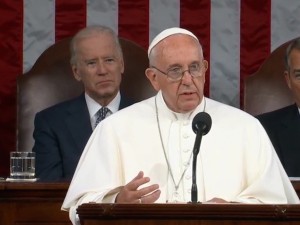 Pope Francis has returned to Rome after a historic trip to the United States. It was a fascinating endeavor. There have been many papal visits to America in my lifetime—in fact, nearly all have been in my lifetime, the first occurring in 1965, the year before I was born. None of these, however, were so heavily marked by political-ideological battle lines among liberals and conservatives. Really, those lines have been drawn boldly on the left, with liberals eagerly claiming this pope as one of them, and many conservatives granting that concession.

Yet, neither side, in truth, watches this pope carefully enough. If they did, both sides would be surprised, shocked, and one side—liberals—would be horrified.

I’m referring specifically to this pope’s remarkably staunch criticisms of the things he sees as threatening the family: What he calls the “throwaway culture” of abortion, the “ideological colonization” and “deforming” of marriage, the “Satanic” adoption of children by homosexual couples, and the “demonic” cult of gender theory.

Yes, those blistering descriptions all belong to Pope Francis.

I could detail any of these here at length and shock liberal sensibilities and claims that this “leftist pope” is one of them. After all, I’ve yet to meet a liberal who thinks that same-sex marriage is the work of “the Father of Lies.”

But I’d like to expend a few words on this pope’s ongoing war against gender theory specifically, and namely its attempted introduction in Francis’ home diocese of Rome and throughout Italy. This has greatly upset Francis, the extent to which we Americans (Francis’ critics and admirers alike) are completely unaware. Now that he is back in Rome, Francis’ battle against gender theory will recommence with zeal.

Of course, gender theory, gender ideology, gender studies, even entire gender programs, have been all the rage in American academia for decades. Pope Francis, for one, despises the very concept. He has argued constantly, consistently, that men and women are not only vitally different, but that these differences—ordained by nature and God—constitute an essential complementarity that husbands and wives bring to marriage and family relationships and responsibilities. Under Francis’ direction last year, the Vatican held an international-ecumenical conference solely on this complementarity. In a world and culture that argues—and, in fact, teaches—that men and women and husbands and wives and dads and moms are interchangeable, if not inconsequential, Francis insists just the opposite. To say he is adamant is an understatement.

“Gender ideology is demonic!” Pope Francis insists. He says that it militates against “the order of creation.” He sees it as so toxic, so destructive, that he has compared gender ideology to “the educational policies of Hitler.”

In Italy, Francis has become the spiritual inspiration for a nationwide movement to banish gender theory. This culminated in a huge demonstration in Rome this summer. As one article reported, “Hundreds of thousands of people from all over Italy responded to Pope Francis’ repeated warnings about gender ideology, by taking part in an enormous demonstration in the square of St. John Lateran in Rome on Saturday. The ‘Family Day’ was aimed at defending the traditional family and stopping the spread of gender ideology in schools.”

Some estimates were higher, as organizers hoped to draw a million marchers. “It’s fantastic,” said one attendee, a father of six from northern Italy. “Finally, people have gathered to fight this terrible ideology.” One organizer celebrated from the stage, “The Holy Father is with us,” as indeed he was.

The speaker held forth under a giant banner that read in Italian: “Difendiamo i nostri figli. STOP GENDER nelle scuole.” Translation: “Defend our children. STOP GENDER in the schools.”

We must understand that Pope Francis views gender theory as not just some feminist thing he doesn’t like. He sees it as a direct threat to family and marriage. And as he said to the joint session of Congress during his recent visit, “I cannot hide my concern for the family, which is threatened, perhaps as never before, from within and without. Fundamental relationships are being called into question, as is the very basis of marriage and the family.” He told President Obama and the crowd that greeted him at the White House that he had come to the country specifically “to celebrate and support the institutions of marriage and the family at this critical moment in the history of our civilization.”

Well, to this pope, gender theory is a major threat to the institutions of marriage and family at this critical moment. In this, and still more, liberals might want to pause a bit before transforming Pope Francis into their poster boy.

[Editor’s note: A shorter version of this article first appeared in the Pittsburgh Tribune-Review.]