Trending Now
You are at:Home»Learn & Live the Faith»Catechesis»Preaching and Receiving the Living Word
By Rev. Tucker Cordani on August 20, 2012 Catechesis, Featured 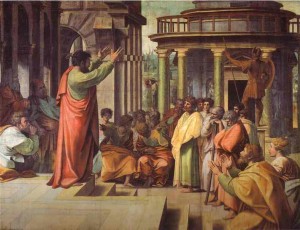 Here it comes: a Bible-thumping sermon from a Spirit-filled preacher.
On my most recent vacation, I drove through the Midwest—Ohio, Michigan, Illinois, and Indiana.  I love radio, and as I traveled through the eastern edge of the nation’s bread basket, I listened to Protestant stations and their fiery evangelical preachers.  Those guys really get excited about the Bible.  Listening to them, it’s clear that there is only the preacher, the microphone, and the Bible.
In the Catholic Church there is an urban legend that Catholics don’t know the Bible very well.  In a debate over the Bible, the story goes, Protestants consistently put us to shame.  I don’t think that is necessarily true, because I know plenty of Christians that worship outside the One True Church and their familiarity with the Scriptures is as pedestrian as many of my parishioners at Our Lady of Guadalupe in western Massachusetts, where I serve as parochial vicar and teach Bible Study.
Nonetheless, we Catholics should work to change the image.  We receive the Word of God at baptism.  From the beginning of our new creation by God in Christ, we become a prophetic people.  In this way, we are co-workers with God in creation.  In that case, how can we say we don’t know the Bible?  Like a roadmap, we receive it at the beginning of our spiritual journey and have only to consult it when we lose our way.
We have a lot of work to do.  The preachers I listened to as I drove impressed me.  They are devoted to the Word of God in a way that surpasses the devotion of many Catholics, including some priests.  It saddens me that many Catholic liturgical preachers rarely talk about the Old Testament or the Epistles or the Psalms during Mass. Instead I hear many who rely on stock theology taken from homily services, or simple summaries of the Gospel stories. These limitations are the result of having not fostered personal devotion to the Word.
It is true that Protestants, because they broke with apostolic succession, do not have a true sacramental relationship with God in Christ.  But because the Word of God is the source of all creation (Genesis 1:1-3), anybody who loves Scripture knows the Living God.  To be devoted to the Word is to be a preacher, ordained or not.
We receive that commission at Baptism—every Christian is priest, prophet, and king.   Baptism is for life.  It can never be taken away.  Like the Word of God, the grace of the sacraments remains forever.  These sacramental graces stem from Scripture.
As a believer and a priest, I must share the Word of God with others in speech and action.   A little love for the Truth goes a long way.  Actually, it goes a long way, all the way back to the beginning.  God spoke one Word, a Name, the light of the world through whom he created everything.  The writer of the Epistle to the Hebrews writes: “In times past, God spoke to our ancestors in partial and various ways.  In these last days, that is, in the days of the Church, he has spoke to us through his Son through whom he created the universe” (1:1-2).The Word was in the beginning with God (cf. John 1:14, 2).  God’s presence continued to carry us through the world after Adam and Eve sinned.  He sustained us through our journey from sin to salvation in His Son.  Like a bridge between the Old and the New Testaments, the  majority of the Bible is supported by the relationship between the Creator and the creatures; He sustains them by His commandments (Hebrews 1:3).
The journey is far from finished.  The Church is like a radio.  We stay tuned for details.  Even though God has spoke completely through his Son, we await the joyful return of Jesus who is and who has the final Word.
Many in this world will try to prevent us from hearing and speaking the truth of the Bible and from living in God’s presence.  Forces hostile to freedom in Christ want to silence us and prevent us from talking about Him.  Our challenge as Christians—in or outside the Catholic Church—is to receive the Word of God and let it germinate in our hearts.Now is not the time to be divided as Christians.  Now is the time to unite and to fight for Christ.  We must listen attentively to one another.  In Ecclesiastes, it is written: “For everything there is a season, a time for everything in heaven and on earth.  A time to be silent, and a time to speak” (3:7a).  The writer of Ecclesiastes called himself “the Preacher.”  He didn’t have a microphone or a megaphone, but he had purpose: to pass on the wisdom of divine things, the Word of God.Now is not the time to be silent.  We must speak with one voice and with one Word, the only one God gave us: Jesus Christ, the Incarnate Logos.
Share. Twitter Facebook Google+ Pinterest LinkedIn Tumblr Email
Previous ArticleInterview with Peggy Bowes on Health and Wellness
Next Article Fanning the Flames of Left-wing Violence