Trending Now
You are at:Home»Learn & Live the Faith»Apologetics»Refuting the Myth of the “Invisible Church”
By David Gray on December 4, 2013 Apologetics, Catechesis, Featured, MyChurchParish.com 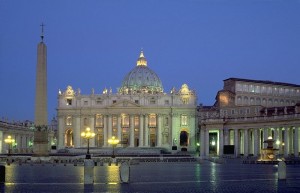 After they rejected the hierarchical Catholic Church, one of the early tasks of the protestant reformulators was to redefine what Church is; more precisely, to define the visible nature of the New Covenant community of God’s chosen people. It being clear to them through sacred Scripture that Christ Jesus actually did established a Church; they needed to define the boundaries of that Church and how it could be identified.

For Catholics, these questions had always been absolutely clear. The true Church of Christ is both universal and visible; more precisely, it is One, Holy, Catholic, and Apostolic. Protestants were unable to answer these questions by pointing to a visible and hierarchical church, because it would have then been impossible for them to resolve the glaring issue of that church’s disconnect from the actual Church that the Apostles established.

How they ended up resolving their issue was by innovating the theology of a juxtaposed and disassociated church. For Gottfriend Leibniz, the disassociated church was defined as the temple of God that was juxtaposed by the temple of men. For Jean Calvin, it was the company of the faithful whom God has ordained and elected to eternal life that was juxtaposed by the company of those who have not been ordained and elected. Leibniz’s temple of God and Calvin’s company of the elect are early roots of continuing Protestant rejection of one visible and hierarchical Church that Christ Jesus established through His Apostles and that the Holy Spirit has continued to preserve in truth.

One of my favorite Scriptural proofs that Christ Jesus intentionally ushered in the age of visible and hierarchy Church is found in the seventeenth Chapter of John.

The Church is a Hierarchy!

In v. 18 Jesus prays, “As you sent me into the world, so I sent them into the world.  Who was Jesus praying for? He was praying for His Apostles (Greek: apostolos, ‘ones sent forth’).  This prayer had an instant implication for those twelve men who He had chosen and ‘sent forth’, as well as future implications for all those who Christ would later choose to ‘send forth’.   In the broadest and most accurate sense, Christ Jesus did not send out individuals for the sake of individuals, but it was His hierarchical Church that He sent forth for the sake of individuals; commissioning them to make disciples of all nations; Baptizing them in the name of the Father, and the Son and of the Holy Spirit (Cf. Mt. 28:19; 2 Macc. 5:19; CCC 767-769).

The Church is Visible!

The first clue that we come upon to prove that our Lord expects for His Church to be visibly one is the word ‘world’ in v. 13. “I speak this in the world so that they may share my joy completely.”  He is praying here for a tangible and visible reality in a tangible and visible world.  The word world (Greek: ‘kosmos’), which is being used in the text of this prayer, means ‘the orderly arrangement, the world’.  Meaning, that in this context of this prayer, our Lord was speaking of the visible world that God created, not the world (‘alon’), which refers to the Messianic age, as in “. . . the harvest at the end of the world . . .” (Cf. Mt. 13:39) – nor the world (‘oikonmene’), which is the known world of man or the world men govern (i.e. the Holy Roman Empire), as in “. . . shall be preached to the whole world . . .” (Cf. Mk. 14:9)