Trending Now
You are at:Home»Columnists»So, What’s the Purpose of Public Education?
By Marybeth Hicks on September 28, 2011 Columnists, Education, Featured

Barely enough time has passed for bologna sandwiches to begin rotting in school lockers, yet the 2011-2012 school year is shaping up to be one of the stinkiest ever, if we’re measuring in episodes of putrid political correctness and radicalism.

• A group in Brookline, Mass., is working to ban the Pledge of Allegiance from its school district on the grounds that reciting it is “un-American” and also might promote the bullying of students who refuse to say it;

• A student in Fort Worth, Texas, was suspended for expressing privately to another student, unrelated to the content of the German class in which they were, that his Christian beliefs taught him homosexuality is wrong. The teacher, overhearing the private comment, sent the student to the principal’s office for disciplinary action – not for holding a side conversation during class, but for opposing homosexuality;

• A mother in the Sierra Sands Unified School District in California learned from her kindergarten and third-grade daughters that a male school cafeteria employee came to work attired in makeup and a top that left bra straps exposed. The District claimed, “its hands were tied” because, while the attire in question would not be permitted for students, it could not bar a transvestite from dressing in drag for work, even if such behavior disrupts the learning environment. 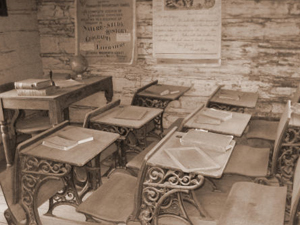 Meanwhile, parents in California work to overturn SB48, the bill signed into law in July by Gov. Jerry Brown that requires schools in that state to teach history and social studies lessons that celebrate the accomplishments of LGBT individuals and require that homosexuality, bisexuality and transgenderism be presented to California school children exclusively in a positive light.

New this year, New York City’s public school students will sit through mandatory comprehensive sexuality education classes, including specific “age appropriate” information about sexual behavior, contraception, LGBT issues, gender identity and sexual questioning. The district decides what is “age appropriate.” Parents who object to the material must opt out of the course for their children, assuming they get proper notification of when such material will be presented.

It’s almost as if the folks in charge of public school education in this nation are deliberately using the schools to achieve their goals of social engineering and indoctrinating youth in a leftist political belief system.

From “radical math” (yes, you can teach math for social justice) to revisionist history (Howard Zinn’s A People’s History of the United State” remains a listed resource for Advanced Placement American history students), from ecoradicalism that passes for hard science to government classes that barely mention the word “republic” when describing that thing our Founders created, we seem to have lost sight of the real purpose of America’s public schools.

In fact, they always have had a goal of indoctrination. To wit: To instill in our youngest citizens the knowledge of our civics and history and the shared code of morality (read: Judeo-Christian ethics) to become productive, informed and educated American citizens.

You can give all the standardized tests you want, but by any measure, our public schools haven’t been getting that mission accomplished for a long time.

Unfortunately, it’s not looking like this school year will be any different.