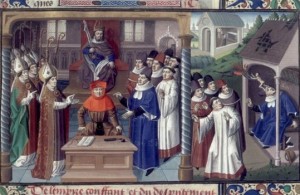 The Council of Nicaea and the Death of Arius

Part one of this series dealt with how Jesus, Scripture, and the saints described and identified false teachers. In this installment we examine the example of St. Athanasius.

The Arians and Their False Teachers

The Arian heresy is named after a priest named Arius (A.D. 250-336) who taught several false doctrines that flowed from a denial of the divinity of Jesus, including denial of the Trinity. Despite the fact that two Church Councils condemned Arianism, many, many laity and priests, and even bishops, accepted it and proclaimed it as true church doctrine. In some localities over 90% of the laity and clergy were Arian heretics.

The Arians had many opponents, some of whom were martyred by Arian mercenaries. The foremost opponent, however, was St. Athanasius (A.D. 296-393), Bishop of Alexandria, who spent most of his life fighting this heresy. Efforts by the Arians to assassinate him failed and he was exiled or fled from his Diocese of Alexandria five times during his life. Some voices raised against the heresy were muted and even emperors joined in promoting the false doctrine. Even so, Athanasius never wavered, earning him the title Athanasius Contra Mundum,  “Athanasius Against the World,” since sometimes it seemed he was the only one of any power or influence publicly opposing the Arians.

Athansius has shown us how to deal with and how to describe false teachers. It may be difficult to believe, but he had some words for false teachers even harsher than the words of Holy Scripture. In his writings (e.g. as translated in Select Writings and Letters of Athanasius, Bishop of Alexandria, originally published in 1892 and reprinted in 1995), he refers to the Arians as “Arian madmen” and “Ariomaniacs” who spread the “Arian madness. ” He calls their heresy a “diabolical irreligion.” He wrote that the Arians “do all things foolishly, and speak as fools.” They “… as swine and dogs wallow in their own vomit and their own mire,” and “. . .invent new expedients for their irreligion.” Athanasius was crystal clear:

“One might say much more against this detestable and antichristian heresy …. but it is full of all filthiness and all impiety, so that the very name of it ought to be avoided as a dog’s vomit or the poison of serpents.”

Many times Athanasius made the point that the Arians tried to make it appear that their heresy was based on Holy Scripture. Athanasius would have none of this:

Nor does Scripture afford them any pretext; for it has often been shewn, and it shall be shewn now, that their doctrine is alien to the divine oracles. Therefore, since all that remains is to say that from the devil came their mania (for of such opinions he alone is sower) proceed we to resist him.

Of all other heresies which have departed from the truth it is acknowledged that they have but devised a madness and their irreligiousness has long since become notorious to all men. For that their authors went out from us, it plainly follows, as the blessed John has written, that they never thought nor now think with us. Wherefore, as says the Saviour, in that they gather not with us, they scatter with the devil, and keep an eye on those who slumber, that, by this second sowing of their own mortal poison, they may have companions in death.

But, whereas one heresy, and that the last, which has now risen as harbinger of Antichrist, the Arian, as it is called, considering that other heresies, her elder sisters, have been openly proscribed, in her craft and cunning, affects to array herself in Scripture language, like her father the devil, and is forcing her way back into the Church’s paradise,— that with the pretence of Christianity, her smooth sophistry (for reason she has none) may deceive men into wrong thoughts of Christ—nay, since she has already seduced certain of the foolish, not only to corrupt their ears, but even to take and eat with Eve, till in their ignorance which ensues they think bitter sweet, and admire this loathsome heresy, on this account I have thought it necessary, at your request, to unrip “the folds of its breast-plate,” and to show the ill savour of its folly.

So while those who are far from it may continue to shun it, those whom it has deceived may repent; and, opening the eyes of their heart, may understand that darkness is not light, nor falsehood truth, nor Arianism good; nay, that those who call these men Christians are in great and grievous error, as neither having studied Scripture, nor understanding Christianity at all, and the faith which it contains. For what have they discovered in this heresy like to the religious Faith, that they vainly talk as if its supporters said no evil? This in truth is to call even Caiphas a Christian, and to reckon the traitor Judas still among the Apostles, and to say that they who asked Barabbas instead of the Saviour did no evil.

Jesus, inspired writers of Holy Scripture, and St. Athanasius have shown us how to describe false teachers. What if we ignore them or we do not accurately describe them? What if we are silent about them? Dietrich Bonhoeffer, theologian, and anti-Nazi activist said this:

“Silence in the face of evil is evil itself… not to speak is to speak. Not to act is to act.”

If in the face of false teaching we do not act, and do not name it for what it is, then by our silence we too proclaim the false teaching. We become a “maniac” speaking doctrinal lies.

And Jesus will spit you out: “I know your deeds, that you are neither cold nor hot; I wish that you were cold or hot. So because you are lukewarm, and neither hot nor cold, I will vomit you out of My mouth” (Rv 3:16).