Trending Now
You are at:Home»Church Street»Saint of the Day»St. Andrew Dung-Lac, Priest, Martyr and Companions
By Catholic Lane Administrator on November 24, 2015 Saint of the Day 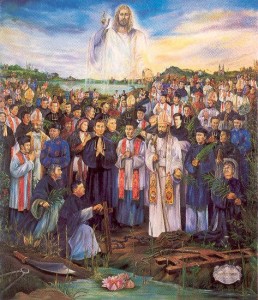 These 117 saints died under persecutions of Christians that in fact lasted from 1625 to 1886 and costed about 130.000 lives. The group consists of martyrs in the three Vietnamese kingdoms of Tonkin, Annam and Cochin China. Among the 117 were 96 Vietnamese and 21 foreign missionaries. Of the Vietnamese group were 37 priests and 59 lay people, among whom were catechists and tertiaries. One of them was a woman, mother of six. Of the missionaries was 11 Spaniards; 6 bishops and 5 priests, all Dominicans, and 10 were French; 2 bishops and 8 priests from Société des Missions Etrangères in Paris. 76 were beheaded, 21 suffocated, 6 burnt alive, 5 mutilated and 9 died in prison as a result of torture.

A Vietnamese diocesan priest who suffered martyrdom in this persecution is Andrew Dung-Lac, who is honoured by being the representative of the 117 martyrs in the Roman Calendar. His name was originally Dung An Trân, and he was born about 1795 in a poor and pagan family in Bac-Ninh in North Vietnam. When he was twelve the family had to move to Hà-Nôi (Hanoi) where his parents could find work. There he met a catechist and got food and shelter from him. He also got education in Christian faith for three years, and was baptised in Vinh-Tri with the Christian name Andrew (Andrew Dung). After learning Chinese and Latin he became a catechist, and thereafter taught catechises in the country. He was chosen to study theology, and on 15 March 1823 he was ordained priest. As parish priest in Ke-Dâm he was tireless in his preaching. He often fasted and lived a simple and moral life, he was a good example for the people, and many were baptised. In 1835 he was imprisoned under emperor Minh-Mang’s persecutions (he was called Vietnam’s emperor Nero), but his freedom was purchased by donations from members of the congregation he served. To avoid persecutions he changed his name to Lac (Andrew Lac) and moved to another prefecture to continue his work. But on 10 November 1839 he was again arrested, this time with Peter Thi, another Vietnamese priest whom he was visiting so that he might go to confession.

Once again Andrew was liberated, along with Peter Thi, in exchange for money. Their freedom was brief. They were soon re-arrested and taken to Hanoi, where both suffered a dreadful torture. Finally they both were beheaded 21 December 1839. Andrew was beatified in the first group on May 27, 1900.