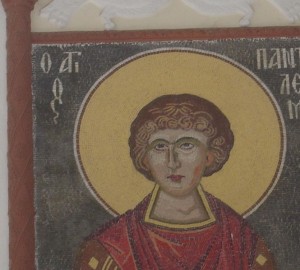 ST. PANTALEON was physician to the Emperor Galerius Maximianus, and a Christian, but, deceived by often hearing the false maxims of the world applauded, was unhappily seduced into an apostasy. But a zealous Christian called Hermolaus awakened his conscience to a sense of his guilt, and brought him again into the fold of the Church.

The penitent ardently wished to expiate his crime by martyrdom; and to prepare himself for the conflict, when Diocletian’s bloody persecution broke out at Nicomedia, in 303, he distributed all his possessions among the poor. Not long after this action he was taken up, and in his house were also apprehended Hermolaus, Hermippus, and Hermocrates. After suffering many torments, they were all condemned to lose their heads. St. Pantaleon suffered the day after the rest. His relics were translated to Constantinople, and there kept with great honor. The greatest part of them are now shown in the abbey of St. Denys near Paris, but his head is at Lyons.

Reflection.—”With the elect thou shalt be elect, and with the perverse wilt be perverted.”