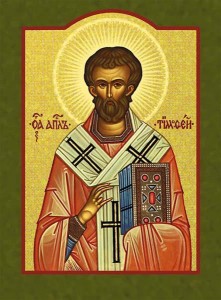 TIMOTHY was a convert of St. Paul. He was born at Lystra in Asia Minor. His mother was a Jewess, but his father was a pagan; and though Timothy had read the Scriptures from his childhood, he had not been circumcised as a Jew. On the arrival of St. Paul at Lystra the youthful Timothy, with his mother and grandmother, eagerly embraced the faith.

Seven years later, when the Apostle again visited the country, the boy had grown into manhood, while his good heart, his austerities and zeal had won the esteem of all around him; and holy men were prophesying great things of the fervent youth. St. Paul at once saw his fitness for the work of an evangelist. Timothy was forthwith ordained, and from that time became the constant and much-beloved fellow-worker of the Apostle.

In company with St. Paul he visited the cities of Asia Minor and Greece—at one time hastening on in front as a trusted messenger, at another lingering behind to confirm in the faith some recently founded church. Finally, he was made the first Bishop of Ephesus; and here he received the two epistles which bear his name, the first written from Macedonia and the second from Rome, in which St. Paul from his prison gives vent to his longing desire to see his “dearly beloved son,” if possible, once more before his death. St. Timothy himself not many years after the death of St. Paul, won his martyr’s crown at Ephesus. As a child Timothy delighted in reading the sacred books, and to his last hour he would remember the parting words of his spiritual father, “Attende lectioni—Apply thyself to reading.”

Reflection.—St. Paul, in writing to Timothy, a faithful and well-tried servant of God, and a bishop now getting on in years, addresses him as a child, and seems most anxious about his perseverance in faith and piety. The letters abound in minute personal instructions for this end. It is therefore remarkable what great stress the Apostle lays on the avoiding of idle talk, and on the application to holy reading. These are his chief topics. Over and over again he exhorts his son Timothy to “avoid tattlers and busybodies; to give no heed to novelties; to shun profane and vain babblings, but to hold the form of sound words; to be an example in word and conversation; to attend to reading, to exhortation, and to doctrine.”