Trending Now
You are at:Home»Featured»Tax-Time Misery
By Tom Purcell on April 12, 2015 Featured, Humor 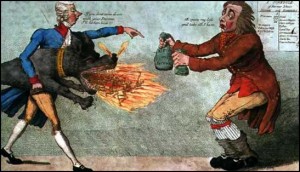 When I came to, I was on my back on the floor of my accountant’s office.

“What happened?” I said.

“When I told you how much you owe, you went down like ton of bricks,” said my accountant.

“I owe the IRS again? But I set aside money every quarter!”

“How many times do I have to tell you? As a self-employed writer, you have to set aside a big chunk of dough to pay your local, state and federal income taxes. Since you are your own employer, you have to pay your FICA (12.9 percent) and Medicare (2.9 percent) taxes. It adds up fast. Most of your income is being taxed at about 47 percent.”

“Forty-seven percent! That’s unconscionable! I thought Republicans in Congress were going to fix this mess.”

“Remember that it was Congress that created the mess. Look, when the income tax became law in 1913, the tax code was 16 pages long. Today it is exactly 73,954 pages — every page more incomprehensible than the one before it.”

“Because the government uses the tax code to do everything from paying back financial supporters to redistributing wealth to giving taxpayers incentives to buy homes, have kids, save money, spend money and on and on.”

“We should reform and simplify our tax system!”

“There has been lots of talk about tax simplification. The last major tax reform happened in 1986, when the economy was half as big and the Internet hadn’t yet transformed commerce. The tax code is outdated.”

“Then how do we proceed?”

“Well, there are lots of ideas to strip out loopholes in return for simplified tax brackets at lower rates. There is even some agreement on both sides of the political aisle to tackle tax reform. Robust debate is needed so that our politicians in Washington can hammer out a new approach that unleashes the economy and moves the country forward!”

“Then why isn’t it happening?”

“President Obama could take the lead on this one and build a consensus among both parties, but he doesn’t seem terribly interested in income-tax reform. Some in the Senate are pushing ideas, but at the moment that is all they are — just ideas. Besides, no small number of people like things just the way they are.”

“People who make good livings helping people navigate our complicated tax code. You think these people want to give up this gravy train? These people have deep pockets and their money fills the coffers of the politicians who do their bidding.”

“You’re depressing me,” I said.

“The truth is that every time a tax-reform bill is passed into law, the lobbyists get right on it and pretty soon all kinds of loopholes and complexities are added back into the tax code. The fact is, taxes keep getting more complex and income taxes keep going up.”

“And that’s why I am miserable this time every year.”

“You are not alone. Did you know it takes the average American taxpayer 13 hours to gather and compile all the necessary receipts and forms to comply with the tax code?”

“It figures. I’ll bet most people have no idea how much they are really paying in hidden income taxes because they aren’t self-employed as I am. Still, there’s got to be something I can do to avoid paying such high taxes.”

“One of my clients came up with a foolproof strategy. He doesn’t owe one dime in taxes for 2014.”

“How did he pull that one off?”