Trending Now
You are at:Home»Columnists»The Challenges that Face the Prolife Movement
By Russell Shaw on January 3, 2013 Columnists, Contraception & Abortion, Featured 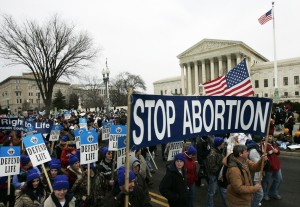 As the prolife movement contemplates four decades of legalized abortion in the United States and asks itself what really needs doing to halt this hideous scandal, prolifers should consider adding a new word to their vocabulary: ambivalence.

According to the dictionary, ambivalence is the state of having mutually conflicting emotions or thoughts about something. And where abortion is concerned, that obviously is how things stand with a substantial number of Americans. They don’t like abortion, but they want it to be legally available.

The annual March for Life in the nation’s capital will be January 25 this year instead of January 22, the actual date of the Supreme Court’s 1973 abortion decision. Ironically, the switch was necessary to avoid conflict with President Obama’s inauguration. As usual, the marchers will be signaling their determination to keep up the fight.

But which fight is that? In fact, there are two fights that need to be fought, and the less obvious is also the more important of the two.

One is the ongoing battle in the arena of law and public policy. For the next four years, the reelection of the most overtly pro-abortion president America has ever had reduces the prolife agenda at the federal level to trying to prevent bad things from happening–no easy task, given Mr. Obama’s views on the issue. Meantime, if there are to be any new initiatives restricting abortion, they will have to come from the states.

But underlying this struggle is–or anyway should be–a more deep-seated: the battle for minds and hearts. Here, the biggest enemy is the ambivalence of a dismaying segment of the public in regard to abortion.

Consider the evidence of the polls. A majority of Americans describe themselves as prolife–that is, opposed to abortion. But last November 6 the exit polls told a different story. Fifty-nine per cent of voters said abortion should be legal in most cases or all, against 36% who said it should be illegal.

A little simple math makes it clear that a goodly number of those putatively prolife abortion opponents also support keeping abortion legal–if not for themselves, then for those who may want it. Ambivalent, you might say.

In a way, of course, this intellectual confusion merely reflects our less than perfect human nature. Abortion is scarcely the only issue where it’s operative. Americans routinely say, for example, that they want lower taxes, less intrusive government, and more government-provided benefits and services. Crazy? Sure. That’s how people are.

Still, this ambivalence about abortion extends beyond confusion to the point of perversity. Once you say that abortion is wrong, after all, you can hardly avoid asking why. But the answer is self-evident: abortion’s wrongness resides in its violation of a fundamental human good, the good of human life.

In that case, though, it makes no sense to say, as some in effect do, that abortion is wrong for me but right for you (or vice versa). If it’s wrong for one of us, then it’s wrong for both of us, and wrong also for everybody else. For the obligation to respect and nurture a fundamental human good like life is a universal duty arising from our common humanity.

In our present era of toxic non-judgmentalism, that message goes unheard and unheeded by many Americans. Since the election, there’s been much talk about reassessment. Here’s hoping that the good people out there marching on January 25 will give thought, among other things, to how to get the message across.