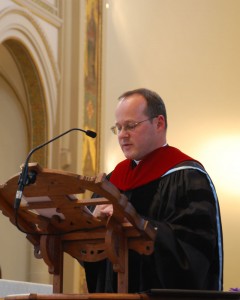 The final day of World Youth Day 2002 began, in a manner of speaking, without our really having noticed it.   Midnight arrived, and Saturday sort of drifted into Sunday in the midst of the all-night vigil which we were keeping in preparation for the Papal Mass which would close World Youth Day the following morning.  Very few if any were sleeping.  After all, sleep is not a built-in feature of an all night vigil!  The night was filled with songs, inspirational talks, and personal witness accounts all coming to us from the stage.   Being far from the stage itself, however, many around us were just delighting in the spirit of the event, and in the spirit of World Youth Day which had brought so many people together from all over the world.  I distinctly recall going for munchies about 2:30 in the morning, and being surrounded by a large group of young people from Poland and another from Mexico, all of whom had considerable more energy at that hour of the morning than I did! Eventually, however, the night did quiet down, and we were able to get a few hours of sleep.  Sunday had already begun!

The wake-up call came to us over the loud-speakers, much more cheerfully than the gray overcast day that greeted us would have suggested.   The day began with sprinkles, and the potential for violent thunder and lightening storms.  There were prudential judgments to be made.   Some decided that the best thing to do was to head to a safer location; others chose to wait to see if the threatened storms would develop or not.

Well, it did rain, a lot!  Everything was soaked, not least of all the pilgrims themselves.  But by the grace of God, that turned out to be about the worst of it.  Up until this point, all of us Pilgrims from the Diocese of Erie had shared the same experience of our final day of World Youth Day.  But shortly after breakfast and a much-needed cup of coffee, I and the other priests in our group who were planning to concelebrate the closing papal Mass needed to begin heading toward the stage area that would serve as the sanctuary for the Mass.  We separated from the rest of our group and began our trek

It was one of most unusual journeys I have ever had on the way to Mass!  I distinctly remember needing to climb up and over two eight foot wooden fences that lined both sides of the roadway that separated the stage area from the sections farther back where we had spent the night.  The fence was supposed to keep the pilgrims off of the Pope’s motorcade route, and thus keep the route clear.  (It wasn’t working, by the way …. there were as any people on the road between the fences as there were to either side of it!)  After climbing up and over two fences and working our way through some of the densest crowds I have ever been, all while it continued to rain, we eventually arrived at the location designated for concelebrating priests .  We prepared ourselves for Mass.  I was vested for Mass as usual, and then some: alb, cincture, stole, chasuble, and poncho!

By the time Pope John Paul had arrived to begin the Mass, it was still sprinkling.  In fact, he was supposed to use the Rite for Blessing and Sprinkling Holy Water as part of the opening rite of the Mass, but instead the Holy Father simply mentioned that God had already taken care of that for us!  And so we moved on to the Gloria.  And then, almost like a miracle, the clouds parted and glorious sunshine came streaming through … even Hollywood couldn’t produce a special effect like that!

All of these things make great memories, but the true miracle of the day wasn’t in the clouds, or the crowds, or the sun breaking through.  The true miracle of the day was in a small plain host, which a frail elderly man held in his hands with such reverence and humility.  And the miracle moved from the altar, into our hearts and souls as that same Eucharistic Lord came to each one of us.  It was a day filled with wonder, but the most wondrous thing of all was found in the gift of God for us, the Bread of Angels that became our Food for the journey.  In the end, we were brought back to what we had said so many times during that week when we were gathered together each day: we were in Toronto not so much to meet the Pope, but to meet Christ.  Pope John Paul would have been the first to remind us of that.  The secret of Pope John Paul was that he captured our hearts not by promoting himself but by doing the opposite.  He lived those words first spoken by St. John the Baptist long ago, “He must increase; I must decrease” (John 3: 30).   We saw the Pope, and the Pope us pointed to Christ.

I saw Pope John Paul once more before he died, at Castelgandolfo outside of Rome where I was privileged to kneel and kiss the Ring of the Fisherman which he wore upon his hand.  By that time he could hardly speak, so ravaged was his body by his illness.  I said to him only two words … Santo Padre … Holy Father.  He nodded in reply.  That is what he was to us, a Father, and in many ways he still is.

That simple man from Wadowice continues to point us to Christ, through the example he gave us and through the prayers which he no doubt continues to offer for us.   We have great memories of World Youth Day 2002 in Toronto, and we each have our own stories to tell.  We received many graces through our taking part in World Youth Day.  If we are to be true to the spirit of Pope John Paul, however, then we must recognize that the graces which we received there continue to be available to us here and now, and that the single greatest gift we received in that summer of 2002 is no farther than the nearest Mass.  It is the gift of Christ present in the Eucharist, who desires to dwell in the tabernacle of our hearts.  He is calling to us.  He is waiting for us.  The journey continues ….

Fr. Edward Lohse is a priest of the Diocese of Erie, Pennsylvania.  Ordained in 1989, he obtained a JCL from the Gregorian University in Rome in 2002, and has been serving as an Official of the Congregation for the Clergy, Rome, since September, 2010.