Trending Now
You are at:Home»Featured»Through a Different Lens
By Genevieve Kineke on August 5, 2011 Featured, On Media 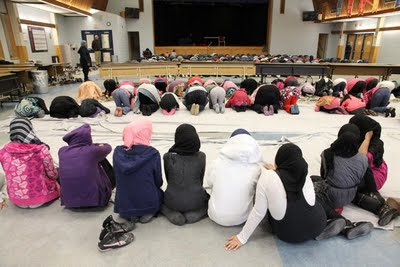 Many people have commented on this picture through a variety of lenses. While the story was originally broken on this blog, the Toronto Star, picked it up and published it with the caption: “At Valley Park Middle School, Muslim students participate in the Friday prayer service. Menstruating girls, at the very back, do not take part.” (Perhaps what isn’t visible is that there is also a barrier in the middle of the room, separating the boys in front from the girls, who pray behind them.)

Is this the Middle Ages? Have I stumbled into a time warp, where “unclean” women must be prevented from “defiling” other persons? It’s bad enough that the girls at Valley Park have to enter the cafeteria from the back, while the boys enter from the front, but does the entire school have the right to know they are menstruating?

The Star’s own columnist, Heather Mallick, is furious:

School is for study. So why are they tolerating this violation of the Education Act, which bans religious services during school hours? The board spokesman referred the Star to its “duty to accommodate” and Dombrowsky’s people served up what I can only call a jargon pie.

And Mark Steyn has his own fun:

I forget which brand of tampon used to advertise itself with the pitch “Now with new [whatever]you can go horse-riding, water-skiing, ballet dancing, whatever you want to do,” but perhaps they can just add the tag: “But not participate in Friday prayers at an Ontario public school.”

So among other reactions, we have commentary from those who are angry that schools are providing space for religious services, some are grumbly that boys and girls are treated differently, and others are galled that menstruating girls are visibly marginalised by their peers (yes, ick!)

Interestingly, a commenter on one thread (I forget where, there were so many) asked readers why they were so upset, since most of us support single-sex bathrooms. The obtuse inability to differentiate between the intimacy of washrooms and seating in public assemblies only indicates that this decades-old gender war has caused people to lose what little sense they were born with.

So, what’s the deal? How should Christians approach this topic? Well, it’s veritably moot to point out that Bibles are not welcome in schools, Scripture no longer has a bearing on academic study, and generic prayers before class were tossed out years ago with hardly a whimper of protest. Christianity as a source of ethics is passé in the public square, so what’s left?

A woman suffering hemorrhages for twelve years came up behind him and touched the tassel on his cloak. She said to herself, “If only I can touch his cloak, I shall be cured. Jesus turned around and saw her, and said, “Courage, daughter! Your faith has saved you.” And from that hour the woman was cured (Matthew 9:20-22).

According to Jewish law, the woman was ritually unclean — through no fault of her own, and thus an “untouchable.” Perhaps his disciples, after grasping what had happened, thought, “If this man were a prophet, he would know that she is unclean” (just as his dinner companions remarked among themselves when a public sinner washed his feet).The point is that the Jewish people at the time of Our Lord’s coming easily categorised people as ritually impure and unfit to interact with polite society, and yet the early Church knew well enough that such thinking was no longer appropriate.

In “the fullness of time,” which was aligned with his sojourn with us, Jesus curtailed these laws — the very laws to which his own immaculate mother had submitted, and yet he left a more perfect paradigm by which to understand male-female relationships: Mutual submission of bridegroom and bride, a relationship which reflects Trinitarian love, and each offering total oblation for the other when necessary. Deeply challenging, but worth the daily effort!

This brings us to the Christian response to this picture. We cannot help but be saddened to see that there are religions that still categorise any members of their lay faithful as “untouchable,” literally or figuratively. This is a chance to look further at Islamic texts, on which this behavour is based:

There is so much more, but I think you get the picture. Thus, regardless of the fact that Islamic laws concerning ritual impurity are derived from the Jewish laws that preceded them, as Christians we patently reject the notion that

For this, we refer to the specific teaching of Our Lord: “He summoned the crowd and said to them, ‘Hear and understand. It is not what enters one’s mouth that defiles that person; but what comes out of the mouth is what defiles one’ ” (Matthew 15:10-11). Likewise, it’s not what walks past a man or where he is seated in the congregation that determines whether God is pleased with his prayer.

Now we fully respect the decision of a group to segregate its members for a particular reason. The Old Testament says:

The Eastern Orthodox deliberately continue this tradition, but make sure that the men and women are side by side, so that neither is nearer to the altar (which could be easily misconstrued).

So ultimately, the only lens that will make sense of this deplorable situation is the Christian lens, and in that light we can see that the very dignity and honour that Our Lord came to offer women is lost when a society doesn’t understand complimentarity. Only a complimentarity understanding of men and women will allow them to be equal and yet remain distinct.

The most ironic element, though, is the righteous anger of those who took such issue with this situation in the first place. While they easily intuited from the picture both the inequality between boys and girls and the indignity attached to broadcasting one of the most private details of a woman’s life, what they will not admit is that they have imbibed an essential element of the Gospel without recognising it. Indeed, two millennia of firm Christian witness have cast their hue over the landscape of their world, so that they expect women to be treated as fully equal to men with a rightful honour before God. That was fundamental to Our Lord’s mission — and even though his name may not be mentioned in these secular halls, that part of his message has permeated Western civilisation and formed a critical part of its very foundation. Let’s be sure not to squander it in a benighted effort at diversity.