Trending Now
You are at:Home»Featured»Veterans: What Is Seen and What Is Not Seen
By Dr. Mark W. Hendrickson on November 10, 2011 Featured, Vocations 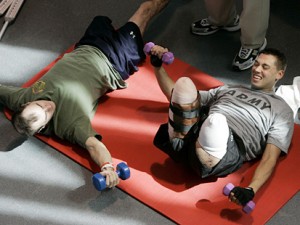 In economics, the first lesson I teach my pupils is the lesson of things that are seen and things that are not seen. Actions have some effects that are readily apparent and others are overlooked or not perceived.

It’s the same with our military veterans. We see the obvious price they’ve paid—the time they spent far away from home and some of the physical injuries, such as lost limbs. What we don’t see are their psychological wounds. Sadly, these are more numerous than physical injuries, and they often cause greater suffering.

It took me many years to understand this. The uncle who raised me was as tough and fearless as any man I’ve ever known, yet even he struggled with deeply disturbing memories from World War II more than half a century later.

He tried to keep those memories bottled up deep inside, but after a few stiff drinks at night, those memories would issue forth in long soliloquies. Many times the uncle I called “Pop” recounted an incident that happened on the aircraft carrier Essex. He was in charge of making the planes flightworthy. One day, a fighter plane returned from its mission intact, except that when Pop checked the belly gunner’s turret, he encountered a gory sight: the belly gunner’s head had been blown off and the turret was a bloody mess.

As soon as he learned of the situation, the captain of the Essex wanted to know if the aircraft could fly again. Pop sent a message back via the ship’s chaplain: Yes, the plane could fly, but all that blood would smell horribly in the tropical heat. Pop recommended confirming the identity of the dead man, administering last rites, then burying the man at sea in the plane in which he had given his life for his country. The captain signaled “thumbs-up” from the bridge, and so the plane became a coffin that was pushed off the flight deck into the Pacific.

Pop had seen much death and destruction in the war, but he couldn’t shake the memory of this particularly vivid incident. Many times I had sat silently while Pop retold the story, doing my best to be a supportive listener. One night, while listening to this story for the umpteenth time, it dawned on me that Pop was haunted by that horrific image, and it seemed right to try to ease his torment. I decided to reason with him the way he had reasoned with me when I was growing up. “Pop,” I said, “ that belly gunner was no more dead than all the other soldiers and sailors killed in the war, and his death may have been more merciful than most, because it happened before he knew what hit him.”

My statements hit home. Pop snapped out of his dreamy, far off, reverie. His eyes took on a clear, focused look. “I suppose that’s so,” he acknowledged, and he then turned the conversation to less intense subjects. I sat with Pop during many more nights when he drank and reminisced before his passing a year later. Never again did he tell that story. That nightmarish memory had ceased to haunt him. He had finally processed it and moved on.

Every veteran close to me has wrestled with disturbing memories to varying degrees. In some cases, it took years, even decades, before they were ready or able to talk about the traumatic events that have haunted them.

Our veterans have far more scars than meet the eye. For most of them, thank God, the love of their families, their many happy memories, and their personal courage to push ahead with satisfying and productive lives enable them to cope with the ugly memories of war.

How can we help them? That isn’t an easy question, but as we pause to recognize and honor their service to our country on Veterans Day, let us resolve to do what we can. Let us be steadfastly supportive friends and family members.

If our veterans need to talk, let us be patient and compassionate listeners.

If they prefer not to talk about their military service and are getting on with their lives, then let us respect their wishes and let sleeping dogs lie.

If their military memories continue to hurt them today, perhaps we need to help them find professional help.

If nothing else, let us look for opportunities to express our gratitude for their sacrifices and pray that each precious one of them may find peace from haunting memories.