Trending Now
You are at:Home»Learn & Live the Faith»Apologetics»What is Apologetics?
By JC Sanders on May 17, 2013 Apologetics, Featured 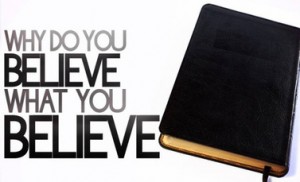 What is apologetics, and how is it related to catechesis and evangelization?

Apologetics sounds a bit like “apologize,” and the two words do share a common root. Stated simply, apologetics means to give an account or defense, or perhaps an explanation. The Christian idea of apologetics can trace itself back to Saint Peter, who advises us by saying:

“Even if you should suffer because of righteousness, blessed are you. Do not be afraid or terrified with fear of them, but sanctify Christ as Lord in your hearts. Always be ready to give an explanation to anyone who asks you for a reason for your hope, but do it with gentleness and reverence, keeping your conscience clear, so that, when you are maligned, those who defame your good conduct in Christ may themselves be put to shame” (1 Peter 3:14-16).

Good apologetics, then, has several marks:

The task of apologetics is related to, but not identical to, both the tasks of evangelizing and of catechizing. The three are interrelated, but there are some differences between them. Consider that apologetics means to offer a defense of beliefs and practices, while catechesis means simply to teach about those same beliefs and practices, and evangelize means to share the Gospels (=Evangelium–>”Good News”). Each might be aimed at slightly different audience, and might have slightly different purposes or even emphases, though all three ultimately must draw from the the same source materials, that is from “faith” and “reason,” or from knowledge which is divinely revealed and knowledge which is known by our secular faculties (the senses, the intellect, etc.). By the way, the marks of good apologetics are as easily applied to being the marks of a good catechesis or evangelism: just replace “defense” with “demonstrate” or “teach about.”

Evangelism, then, is directed mostly (though not exclusively) to those who are outside the Faith. It reflects the Beauty of the Church, and should be about the joy of the Christian life and the goods news of salvation in Christ. In a different sense, it is also directed at those inside the Church. It means to inspire others to take up their daily crosses (Luke 9:23), or to repent of their sins and turn their hearts to God, or (in summation) to strive to become saintly men and women after God’s own heart. It is not only the heathen infidels who need such examples.

Catechesis, for its part, means to instruct in the faith. It primarily is directed to the ignorant, and generally towards a more “friendly” audience: we catechize our children, or adults who wish to enter the Church (e.g. in RCIA). In the longer term, we catechize also adults who are already members of the Church who want to learn more about their faith. The parish Bible study, for example, is a form of catechesis, as are the homilies given by the priest during Mass (to say nothing of any special series he may present outside of Mass). Catechesis means providing answers to our questions about what we ought to believe, what we ought to desire, and how we ought to live. It is the educational and intellectual [1] side of becoming a good Catholic, and ultimately, hopefully, a saint [1].

Apologetics, then, means to defend the faith, or at least to give a good account for it, to explain it. It is directed, then, primarily to those who are not Catholic and who are indeed hostile [3] towards the Church. If Evangelism answers primarily the question “what/who?” and catechesis primarily the question “how?” then apologetics might be said to answer the question “why?” [4] Why do you believe that Mary was conceived without sin, or why do you believe that the Pope is infallible, or why do youbelieve that contraception and abortion and homosexual acts are evil? Thus, while evangelism is pro-active, apologetics is reactive [5]. Looked at another way, apologetics is meant to address objections to the faith, thereby clearing the path for evangelization to take place.

I will not attempt to answer those questions here, but I give them as some common objections to the Catholic Faith. Instead, I would like to offer some observations, and some advice.
—
In keeping with the marks of good appologetics, note that honesty is integral. This means both honesty with the interlocutor and with yourself. It’s not just about winning arguments, but winning hearts and minds. Indeed, apologetics is in a sense the handmaid of evangelization. It is, in other words, ok to admit to not having all of the answers (especially on the spot). I don’t have all the answers, and neither do you.

On the other hand, it is worth reminding yourself that the answers do exist, and should be pursued. It’s always nice to learn something new, to deepen or widen your knowledge about God and man and the Church and the world. Sometimes–ok, often–we gain a deeper love for the Faith by learning more about it, and (more importantly) we can grow in faith and love by learning more about God. Since apologetics touches on culture, history, philosophy, theology, and even (modern) science, to name a few few subjects, it sometimes ends up becoming a sort of “gateway” into exploring these fields; they are vast, and we are small. There are a wealth of good resources. As the motto of my order goes: “Veritas” (“Truth”).

G.K. Chesterton’s advice applies: “Let your faith be less of a theory and more of a love affair.” So too does John Randolph of Roanoake’s addage: “Providence moves slowly, but the devil always hurries.”

The purpose of evangelization is to win hearts and minds to God by inspiring conversions. Apologetics can help. This should not be confused with mere proselytism, whose goal is to induce people to convert at all costs. There is some truth to the idea that it is better to be a good pagan than a bad Christian–even if Christianity is better than paganism. Perhaps more accurately, it’s better that a person should slowly become a good Christian than that he should quickly become a bad one. We should desire that all people come to know God, and we should certainly try to make converts of all people; but conversion is interior as well as exterior, and (as emphasized above) winning the intellect does not always win the whole soul: best “hearts and minds,” and that freely rather than coerced or induced.

It’s good to be able to speak confidently and to boldly proclaim the Truth. Failing this, it is still ok to speak truly but with a shaking and timid voice, if that is all we can muster. Sometimes silence is the only answer. Lying, on the other hand–which includes making up the answers and passing them off as true–is generally wrong.

As a corollary of this, there is more than one type of conversion. The most dramatic kind is the full conversion for life to Christ; too rare are those who have had this, many of whom are now canonized saints. Then there are conversions of faith, in which a person becomes a “convert,” that is he enrolls in RCIA/Adult Confirmation Classes and eventually is confirmed in the Catholic Faith [6]. These are very rewarding to watch, and I am grateful to have been a part of some such conversions. There is yet another type of conversion, which is the conversion away form a particular sin, and still another which is the interior acceptance of a true doctrine with which a person had struggled (or worse, openly rejected). Then there is the simplest and perhaps the most common kind of conversion, which involves not so much an acceptance of the Faith (or even of a doctrine of the Faith), but rather the softening of an attitude against it. I have witnessed many of this type of conversion, including in friends who are not and may never become Catholics or even Christians.

I would like to dispel a common misconception: we do not convert anybody. We may proselytize, but conversion is the work of the Holy Spirit.

Another common misconception is that apologetics is about being a quick thinker and a good speaker (or, heaven help us, a good debater). This are good skills to have, but there are two other important traits of an apologist (and even more so of an evangelist): he listens patiently, and responds tactfully [7]. Both of these skills are far harder to develop, and both can lead to mistakes in thinking by attempting to respond too hastily. I know of what I speak.

A closing thought from C.S. Lewis, “There have been men before now who get so interested in proving the existence of God that they came to care nothing for God Himself…as if the good Lord had nothing to do but exist! There have been some who were so occupied in spreading Christianity that they never gave a thought to Christ.” We must remember that the point of all of this–the dogmas and doctrines and practices, in short of the Catholic religion–is to bring us closer to God. Yes, the dogmas are true–but they were also revealed to us for a purpose, and that purpose is to deepen our relationship with God.

—Footnotes—
[1] We teach the intellect, but can only train the will. On a related note, we can easily learn to understand arguments form an objective standpoint, but it’s all-too-easy to overlook the subjective standpoint, to say nothing of motives.

[2] A saint is a person who is in heaven, so we should all desire to become saints, canonized or otherwise.

[3] Hostile is a hard term, since this is being applied not only to the raving atheist or fundamentalist Protestant, but even to the friendly agnostic or the charitable Protestant who nonetheless will argue against any number of the Church’s doctrines and practices.

[4] That might be a bit of an oversimplification, since catechesis also answers “what, who, and why?” questions. Still, apologetics primarily deals with “why” and not what or how, though thanks to a number of misconceptions the actual presentation of apologetics may ultimately also answer “what” and sometimes even “how”, too.

[6] I suppose that “reverts’ count here too. These are people who grew up Catholic, received the sacraments (through Confirmation), then left the Church, only to return later, embracing the Faith that they had once cast aside. A revert, however, does not need to attend RCIA, but only needs to go make a good confession to a priest, provided that he has not incurred any canonical penalties (e.g. excommunication).

[7] Not to be confused with being merely “nice” or “polite.” Indeed, Charity, kindness, and even tact (the pastoral side of things) are often mistaken for sugarcoating hard truths, or simply ignoring them. This is neither charitable nor kind, and it is certainly not merciful.