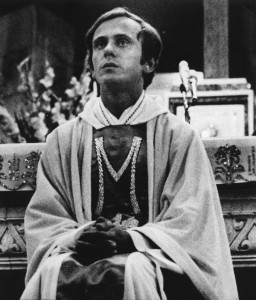 It was October 19, 1984—30 years ago this week. A gentle, courageous, and genuinely holy priest, Jerzy Popieluszko, age 37, found himself in a ghastly spot that, though it must have horrified him, surely did not surprise him. An unholy trinity of three thugs from communist Poland’s secret police had seized and pummeled him. He was bound and gagged and stuffed into the trunk of their cream-colored Fiat 125 automobile as they roamed the countryside trying to decide where to dispatch him. This kindly priest was no less than the chaplain to the Solidarity movement, the freedom fighters who would ultimately prove fatal to Soviet communism—and not without Popieluszko’s stoic inspiration.

The ringleader this October day was Captain Grzegorz Piotrowski, an agent of Poland’s SB. Unlike Jerzy, who grew up devoutly religious, Piotrowski was raised in an atheist household, which, like the communist despots who governed Poland, was an aberration in this pious Roman Catholic country. The disregard for God and morality made Piotrowski an ideal man for the grisly task ahead, which he assumed with a special, channeled viciousness.

Piotrowski’s first beating of the priest that evening was so severe that it should have killed him. Jerzy was a small man afflicted with Addison’s disease. He previously had been hospitalized for other infirmities, including (understandably) stress and anxiety. But somehow, the priest was managing to survive as he fought for his life in the cold, dark trunk of the Fiat. In fact, somehow he unloosened the ropes that knotted him and extricated himself from the car. He began to run, shouting to anyone who could hear, “Help! Save my life!”

He was run down by Piotrowski, a dedicated disciple of what a Polish admirer of Jerzy, Pope John Paul II, would dub the Culture of Death. “I caught up with him and hit him on the head several times with the stick,” Piotrowski later confessed. “I hit him near or on the head. He fell limp again. I think he must have been unconscious. And then I became—never mind, it doesn’t matter.”

It did matter. It certainly mattered to the helpless priest. What Piotrowski became was something altogether worse. He seemed overtaken by another force. As recorded by authors Roger Boyes and John Moody in their superb book, Messenger of the Truth, which is now a gripping documentary, Piotrowski’s accomplices thought their comrade had gone mad, “so wild were the blows.” It was like a public flogging. Jerzy’s pounding was so relentless that it wouldn’t be misplaced to think of Christ’s scourging at the pillar. This young man in persona Christi, not much older than Jesus Christ at his death agony, was being brutally tortured. It was a kind of crucifixion; the kind at which communists uniquely excelled.

One is tempted to say that Piotrowski beat the hell out of Father Jerzy, but such would be inappropriate and inaccurate for such a man of faith. Really, the hell was coming out of the beater, in all its demonic force and fury.

After another round of thrashing, Piotrowski and his two fellow tormentors ramped up the treatment. They grabbed a roll of thick adhesive tape and ran it around the priest’s mouth, nose, and head, tossing him once again in the vehicle, like a hunk of garbage on its way to the heap.

Though he could barely breathe or move, Father Jerzy somehow again pried open the trunk as the car continued to its destination. This set Piotrowski into a rage. He stopped the vehicle, got out, looked sternly at the priest, and told him that if he made even one more sound, he would strangle him with his bare hands and shoot him. Boyes and Moody report what happened next: “He [Piotrowski] replaced the gun and lifted [his]club. It came down on the priest’s nose, but instead of the sound of cartilage breaking, there was a plop, like a stick hitting the surface of a puddle.”

The perpetrators didn’t realize it quite yet, but it was the final, deadly blow. The next time they saw Father Jerzy, they had no doubt.

The killers drove to a spot at the Vistula River. They tied two heavy bags of stones, each weighing nearly 25 pounds, to the priest’s ankles. They lifted him in a vertical position above the water and then quietly let him go. He sunk into the blackness below them. It was 10 minutes before midnight, October 19, 1984. “Popieluszko is dead,” announced Lieutenant Leszek Pekala to his collaborators in this revolting, sad crime. The third helper, Lieutenant Waldemar Chmielewski, solemnly and simply affirmed, “That’s right.”

They drove away, downing a bottle of vodka to try to numb what they had done. Pekala thought to himself as he drank, “Now we are murderers.”

Indeed they were. Of course, so was the system they represented. It and its handmaidens had consumed countless Jerzy Popieluszkos and tens of millions of others whose names tragically will never be remembered on the anniversary of their deaths.

This priest, however, was remembered, by the millions. When he didn’t show for 7:00 a.m. Mass the next morning, his parishioners were immediately alarmed. This wasn’t like the loyal and punctual man of the cloth. A search for his whereabouts quickly commenced. It would take some time, but the truth eventually prevailed, as it did against communism generally. Among those sickened by the news was a Polish priest in the Vatican, Karol Wojytla—Pope John Paul II. The shocked pontiff could relate: he had experienced many fellow Poles and priests killed by totalitarianism. He himself was a survivor. The communists had wanted him dead as well; they tried to assassinate him three years earlier.

And like John Paul II, Jerzy Popieluszko’s torment at the hands of devils was not in vain. Millions of Poles poured out of their homes and into churches to pay him homage, as they had for their native son, Karol Wojtyla, back in June 1979—a historic, life-changing visit that a young Jerzy helped coordinate. Ironically, Jerzy had been charged with working between the Vatican and Polish Ministry of Health to arrange emergency safety measures during that trip. Then, too, he had the mission of protecting people from harm—harm by communism.

Ultimately, Jerzy Popieluszko’s struggle, like that of his pope, was not in vain. As Tertullian once put it, the blood of the martyrs is the seed of the Church. The communists could not extinguish Poles’ desire for the Church, for God, and for freedom. It would take another five years after his death, but the saintly priest’s demise had further fueled the flames for the torch of freedom and the corresponding crash and burn of communism.

In retrospect, Jerzy’s murder in 1984 marked the mid-point between two cataclysmic events that put nails in the coffin of communism: John Paul II’s June 1979 visit to Poland and the crucial free elections held in Poland in June 1989. Those elections, more than anything else, signaled the coming collapse of communism. Mikhail Gorbachev later said that when those elections were held in Poland, he knew it was all over. It was no coincidence that the Berlin Wall fell five months later.

Father Jerzy Popieluszko was one of many martyrs at the hands of atheistic communism. But his cause was an especially significant one. His service and death were not in vain.

[Editor’s note: this article first appeared at The American Spectator. Fr. Popieluszko was raised to the altars, June 6, 2010.]