Trending Now
You are at:Home»Featured»Where Are We, Ten Years After 9/11?
By Frank J. Gaffney, Jr. on September 10, 2011 Featured, Government & Politics 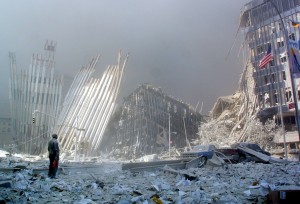 So, where are we ten years after 9/11?  It is comforting that we have been blessed with a near-unbroken decade without further mass-casualty attacks since those that killed nearly 3,000 Americans on September 11, 2001.  Unfortunately, our government is pursuing policies that can only encourage those who aspire to do us harm to redouble their efforts.

Such an assessment was implicit in a critique of President Obama’s new counter-terrorism”strategy” delivered last week by Senate Homeland Security Committee Chairman Joseph Lieberman.  The Democrat-turned-Independent from Connecticut described the President’s so-called  “Empowering Local Partners to Prevent Violent Extremism in the United States” white paper as “ultimately a big disappointment”:

Sen. Lieberman observed, “We’re in a global war that affects our homeland security with Islamist extremists. To call our enemy violent extremism is so general and vague that it ultimately has no meaning. The other term used sometimes is ‘Al-Qaida and its allies.’ Now, that’s better, but it still is too narrow.”

It is vital to understand that we’re not just fighting an organization Al-Qaida, but we are up against a broader ideology, a politicized theology, quite separate from the religion of Islam that has fueled this war.  Success in the war will come consequently not when a single terrorist group or its affiliates are eliminated, but when broader set of ideas associated with it are rejected and discarded. The reluctance to identify our enemy as violent Islamist extremism makes it harder to mobilize effectively to fight this war of ideas.

As it happens, Sen. Lieberman is, like President Obama, right up to a point.  If we are properly to recognize the enemy we face, however, we must appreciate two facts the Senator misses, as well:  1) The threat from adherents to the “politicized ideology that has fueled this war” are also using non-violent — or, more accurately, pre-violent — techniques to wage it against us.  And 2) that ideology is actually not “separate from the religion of Islam.”  Rather, this politico-military-legal doctrine known as shariah is derived from the sacred texts, interpretations, rulings and scholarly consensuses of Islam.  The reality that many Muslims around the world practice their faith without following the dictates of shariah simply means that some believe this code is separable from Islam.  But, it is surely not “separate” from it.

These errors are at the heart of the present danger ten years after 9/11 – namely, a failure to recognize that, in addition to “violent extremism” at the hands of Islamists, we confront what Professor Richard Landes of Boston University has characterized as those foes’ concerted efforts in the area of “cognitive warfare.”  The author of a timely new book, “Heaven on Earth: The Varieties of the Millennial Experience,” writes in a riveting essay published online at Tablet, that:

Cognitive warfare aims to paralyze the will of the enemy to resist attack, to maneuver that enemy into adopting vulnerable positions, and eventually to get him to give up in a conflict. In cognitive warfare, real violence (such as terror attacks) are adjuncts to the mental conflict, and the targets of such warfare are large audiences both among populations at home (recruitment and mobilization) and, still more significantly, among the enemy (paralysis)….

One the most important dimensions of their cognitive war is to get infidels, even without being conquered, to behave according to the restrictions of Islam. Among the most important impositions we have seen of this phenomenon…is the absolute prohibition on criticizing Allah or his prophet [known as “shariah blasphemy” laws]. Thus, a major battlefield of the cognitive war between jihadis and the West concerns tolerance for criticism of the other.

Cognitive warfare, or what the Muslim Brotherhood calls “civilization jihad,” is about creating the conditions under which so-called “non-violent” Islamists can achieve their ultimate objective — which is precisely the same as the one pursued by their violent co-religionists: imposing shariah worldwide and a Caliph to rule according to it.

So where are we ten years after shariah-adherent Islamists sought to destroy the centers of American economic, military and government power?  We remain dangerously exposed to similar sorts of violence from an enemy the President declines to name.  Worse yet, to the extent we fail to perceive the cognitive war being waged against us against by al Qaeda’s partners in the Muslim Brotherhood and the Organization of Islamic Cooperation — to say nothing of persisting in the Obama administration’s willingness to give ground in that war, notably by submitting our freedom of speech to shariah blasphemy laws — our Islamist foes will only be emboldened.

And that means a heightened likelihood of success in the violent attacks the shariah-adherent jihadists are sure to mount in the years to come.