In November, the United Nations Population Fund released their “State of World Population 2012: By Choice, Not By Chance – Family Planning, Human Rights and Development,” which stated:

According to the UNFPA, 100% of “unmet need” for contraceptives is attributable to lack of access.  But is that really true?  The facts say otherwise.

In 2011, the Guttmacher Institute released a report in which they surveyed women in developing countries to find out exactly why their “need” for modern contraceptive methods was still “unmet.”  They focused on three regions: Sub-Saharan Africa, South Central Asia, and Southeast Asia, which account for almost 69% of the “unmet need” in the developing world. 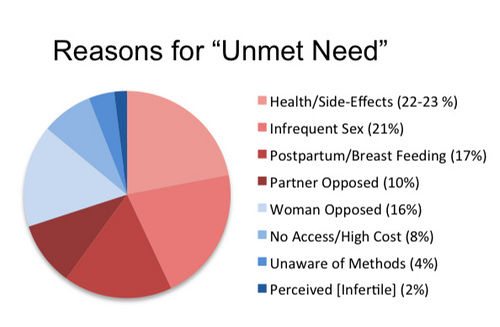 Only 8% of these women cited lack of access or high cost as the reason they did not use modern contraceptives.  An additional 4% claimed lack of awareness as their reason.  In contrast, a combined 60% pointed to side-effects, infrequent sexual activity, or the fact that they had were postpartum and/or breastfeeding.  10% claimed that their partners were opposed to contraception, and 16% said that they themselves were opposed – twice the number who claimed to have no access.

The authors next subdivided the graph into two groups: one they characterized as “concerns that can be resolved with use of appropriate methods,” and a catch-all group containing everything else.  They notably included “partner opposed” within the first group with this explanation:

“We assume that these reasons for non-use could be addressed by providing women with a method that could be used without partners’ or others’ knowledge.”

Then the authors took the catch-all group and lumped its four subcategories together under the new heading “access-related and other concerns.”  This name choice is odd because it refers to the second-largest subcategory (no access/high cost) rather than the largest (woman opposed), but it was certainly not unintentional.  By mere sleight-of-hand, Guttmacher has elevated that 8% (no access/high cost) to 29% (access-related and other concerns).  The new, combined category is now the largest single piece of the pie.  Never mind that over half of that 29% would not use contraceptives regardless of accessibility. 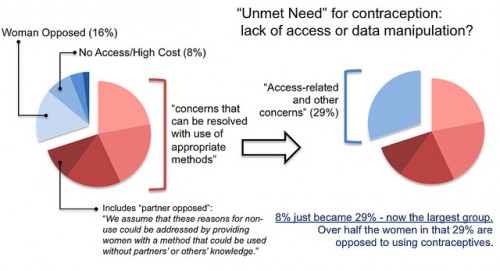 But 29% is still well shy of the implied 100% of “unmet need” that the UNFPA report attributes to lack of access.  Its authors include the Guttmacher analysis of “unmet need” among their references, but their focus remains squarely on access: the 130-page document mentions access to contraceptives 178 times.  Side effects of contraceptives, infrequency of sex, and postpartum or breastfeeding women merit a combined 16 mentions, despite accounting for 60% of “unmet need” in the developing regions Guttmacher surveyed.

Why would the UNFPA focus so much of their attention on an issue affecting only 8% of the women they mean to target?  Simply put, their glossy reports are intended for policymakers representing donor countries.  If you’re asking for billions of dollars for family planning – $8.1 billion a year, to be exact – it’s easier to make your case in terms of providing access to one’s basic human rights than in terms of foisting contraceptives on women who are skeptical of their effects or opposed to them on principle.