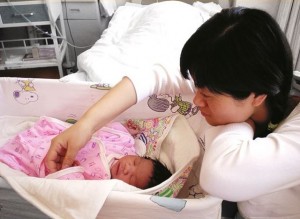 An obstetrician in the Shaanxi province of China was sentenced to death for child trafficking this week. The 55 year old woman repeatedly told her patients that their new born infant was either deformed or sick. She persuaded the new parents to give up their children for adoption. Instead of adoption, however, the infants were sold to human traffickers for profit.  Doctor Zhang Shuxia pleaded guilty to selling seven children, but she remains the prime suspect in over 20 cases of missing children in the province. Five other employees at the hospital were arrested as accomplices. This recent case of Doctor Shuxia is a result of the two great disasters caused by China’s birth control policy: the moral and the demographic.

The one-child policy provided both the demand and the supply for the Doctor Shuxia’s trafficked children. China’s restrictive birth policy fuels the demand for sons; healthy male children have become prized treasures and are sold to couples desperate for a male heir.[1] Decades of sex-selective abortions mean females of reproductive age are now scarce. China’s human-trafficking industry is booming to supply both male heirs and female sex-slaves.

For Doctor Shuxia, China’s birth control policy also provided the supply of children. Dr. Shuxia told her patients that their newborns were sick or deformed. The parents then gave up their supposedly sick child to be able to try again so their only child would be a healthy one.[2]

In addition to creating both the demand and the supply for children, China’s birth control policy created the moral culture in which children became commodities to be bought and sold.

China instituted its birth control policy in 1979 to quell fears of overpopulation, but the greatest effect of the one-child policy is not skewed demographics, but rather a moral devastation inflicted upon the Chinese people.  Doctor Shuxia was twenty years old when the one-child policy commenced. Now she, and several generations of Chinese children, have grown up in an environment where the government uses fear and pressure to control the most intimate elements of family life. Metal intrauterine devices (IUDs), fines paid to the family planning police, government-monitored menstrual cycles, and forced abortion—all of these have touched, at least tangentially, every Chinese woman and man.[3]

And Doctor Shuxia has seen such suffering continue, not despite the efforts of her government, but at its persistent behest. Indeed, Population Research Institute documented officials of the Chinese government “confiscating” and selling childrenwho were born in violation of the birth control policy. With such government-sanctioned atrocities, we should be outraged, but we should not be surprised when individual Chinese citizens likewise disrespect life for their own profit.

Dr. Zhang Shuxia is now sentenced to death for crimes which her government repeatedly committed and cultivated. Ironically, the  Beijing Times Newspaperrecently called for “fair punishment” for Dr. Shuxia saying that the death penalty will “inject the authoritativeness of law into professional ethics of doctors and will warn doctors not to take the wrong step that brings them lifelong regret.”

The “one-child policy” recently broadened the group of couples who are permitted to bear two children. Despite this recent “loosening” of the policy, the Chinese government still maintains strict control over reproduction. The change in China’s birth control policy was merely a technical concession stemming from demographic concerns, and there has been no real improvement from a moral perspective: birth permits are still required, sterilizations are coercively enforced, and illegal children are still forcibly aborted.[4]

The Chinese government has made a miniscule step in the direction of demographic recovery, but China still has a long road of spiritual recovery ahead.

Keeping in mind the long-term recovery of human rights in China, we recommend against the death penalty for Doctor Shuxia. A legitimate respect for life cannot start with a death in the name of retribution.