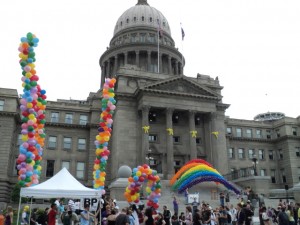 With liberal activists emboldened by their recent legislative victory in New York (where a same-sex “marriage” bill was passed into law on June 24th) one can reasonably expect to see efforts redoubled to further promote the “gay rights” agenda nationally.  With this in mind I’d like to offer some observations.

In every state where same-sex “marriage” laws exist (New York being the sixth plus the District of Columbia), it has come about via legislative gamesmanship with the outcome being greatly influenced by the well-financed efforts of out-of-state activists, and even then were they passed by just the narrowest of margins.

Yet in every state (thirty in total as of this writing) where the issue has gone directly before the citizens in the form of a referendum, American voters have consistently approved state constitutional amendments limiting the definition of marriage to the union of one man and one woman, and this after more than a decade of having the homosexual agenda pounded into our collective psyche via books, movies, television and even public education.

This being the case, what happened in Albany on June 24th can in no way be construed as a “victory for freedom” as its proponents claim; it’s really more akin to legislative rape. The citizens of New York, as elsewhere, were never solicited for consent for the simple reason that the perpetrators of this assault against God and country knew damn well it wouldn’t have been granted.

Even the largely progressive people of California overwhelmingly rejected “gay marriage” by voting in favor of the 2008 California Marriage Protection Act otherwise known as Proposition 8.

Issue resolved, right? Think again. Liberal activists simply interpreted this rebuke of their seduction-by-propaganda campaign as a signal that the time was nigh to reach into their judicial bag-o-tricks for some duct tape and rope since “no” only means “no” to these champions of freedom when it dovetails with their agenda.

In August of 2010 Federal Judge Vaughn R. Walker (who also just happens to be in a long-term homosexual relationship of his own) effectively bound and gagged the California electorate by ruling the Act unconstitutional. The matter is currently pending further appeal.

A Different Kind of “Loving and Committed”

Who can possibly count the number of times we were lectured about all of those “loving and committed homosexual couples” who are unfairly being denied the right to enshrine their commitment in marriage just like their heterosexual counterparts?

The lie, of course, (repeated so often that naïve rank-and-file liberals simply accept it as fact) is that exchanging the little bride statue on top of the wedding cake for another dude (or vice versa) in no way implies a conflict with the traditional understanding of what “love” and “commitment” actually mean.

At one point the propagandists even asked us to believe (and surely many did) that homosexual couples are actually superior to heterosexuals in living out the marriage commitment!

“For insights into healthy marriages… a growing body of evidence shows that same-sex couples have a great deal to teach everyone else about marriage,” reported the N.Y. Times in 2008.

In 2010, however, apparently confident that the mission was sufficiently accomplished to allow for a bit of candor, the Times sang a different tune.

“A study to be released next month is offering a rare glimpse inside gay relationships and reveals that monogamy is not a central feature for many. New research at San Francisco State University reveals just how common open relationships are among gay men and lesbians in the Bay Area,” the article revealed.

“The Gay Couples Study has followed 556 male couples for three years — about 50 percent of those surveyed have sex outside their relationships, with the knowledge and approval of their partners.” [2]

Who Are These People?

One has to wonder who the proponents of same-sex “marriage” are and what exactly motivates them to take such an unnatural position? Clearly, they’re not all homosexual.

In March of 2011, the Centers for Disease Control published a study called “Sexual Behavior, Sexual Attraction, and Sexual Identity in the United States” in which researchers concluded that only 1.7% of men and 1.1% of women among adults 18-44 years of age have a homosexual orientation – a far cry from the 47.5% of California voters who opposed Proposition 8, for instance. [3]

So again, who are the “gay marriage” supporters and what motivates them?

The bottom line answer in most if not all cases, I believe, is pretty simple. They are people who are unwilling to acknowledge the existence of natural law and objective truth, preferring instead to subjugate morality to the whims of personal opinion. The difficulty these individuals face in applying the demands of objective moral standards relative to someone else’s behavior is that doing so necessarily brings them uncomfortably close to examining how those same demands are being met, or not, in their own life.

Now, that’s not to say that every individual same-sex “marriage” supporter possesses the self-awareness necessary to understand their own motives as such, but make no mistake; this is exactly where the rubber meets the road.

Consider, for example, those who favor so-called “abortion rights.” The idea that morality isn’t subject to personal interpretation is an untenable proposition for the occupants of this particular “glass house” for obvious reasons, and their numbers are by no means insignificant.

While it appears that no dependable data exists concerning the number of individual women who have had an abortion, in a 2010 article Newsweek writer Sarah Kliff defended her estimate of roughly 40% of American women. [4]

Whatever that raw figure actually happens to be, this means that an approximately equal number of men were effectively given (and in most cases presumably enjoyed) a free pass from the responsibility that naturally comes with fathering a child.

I think it’s safe to say that acknowledging homosexual activity as incongruous with human dignity is a stone very few of these folks are willing to throw.

For a more specific example, consider the Honorable Andrew M. Cuomo – a man who has convinced himself that shacking up with his co-adulterer, publicly supporting and enabling abortion and cramming the homosexual agenda down his constituents’ throats does nothing to endanger his status as a Catholic-in-good-standing no matter what the Church says.

Surely there isn’t much room for objective moral standards for those who cling to such views as these.

“When I was Hungry, You Didn’t Feed Me”

It may very well be that a certain number of same-sex “marriage” supporters are also people who are understandably struggling, in a culture that is determined to convince all concerned otherwise, to come to terms with the fact that their homosexual loved one is not only given to harmful and deviant sexual practices, but is also suffering the deleterious effects of a psychological disorder.

(If you haven’t already, do yourself a favor and get educated about how the American Psychiatric Association went about removing homosexuality from its list of officially recognized disorders. Hint: it had little to do with clinical research and much to do with caving in to the demands of political correctness.)

I think the overwhelming majority of people (but especially those who have a homosexual loved one in their life) just instinctively know that all is not truly well with many such individuals on an emotional, psychological, developmental or spiritual level, and the politically incorrect truth is there is plenty of clinical evidence to back that perception up.

Any number of well-designed studies have been published identifying certain environmental factors in adolescence that may serve to contribute to same-sex attraction (e.g., sexual abuse, unhealthy parent relationships, weak masculine or feminine identity, etc.). Other studies have documented the numerous ways in which many of these individuals are uniquely suffering (e.g., with increased risk of depression, drug abuse, narcissism, suicide and even cancer).

Simply ignoring the data or explaining it away by blaming the “mean” people who don’t applaud unchaste behavior is not an example of love for the homosexual person; on the contrary – it’s an assault against their innate human dignity and a truly a form of hatred.

It’s high time to label the liberal agenda with regard to homosexuality for what it really is – the wholesale exploitation of a suffering class perpetrated by those who are determined to avoid facing the reality of objective truth in their own lives. They can dress it up in compassionate language all they want, but at the end of the day, it is they who are failing to recognize the dignity of those who suffer with same-sex attraction.

The liberal approach to homosexuals is no different than telling a starving man to embrace his hunger while the demands of political correctness prevent him from being fed.

The N.Y. Times reports that New York City “will take the unusual step of opening city offices on a Sunday, July 24, so gay couples can marry on the day the law takes effect. The city clerk’s offices in all five boroughs will open that day, and judges will be on hand to officiate at the weddings after couples receive marriage licenses.”

It is somehow both disgusting and fitting, is it not, that a government that so blatantly thumbed its collective nose at God should make a mockery of the sacrament of marriage on the day of the Lord?

A Picture Worth a Thousand Words

A N.Y. Times photograph taken at the State House in Albany before the final vote on the same-sex “marriage” bill shows a group of white, college-aged supporters holding up professionally printed signs that say “Marriage Now!” and “Equality for all Families,” while the lone hand-written sign read, “If you vote yes, we will vote you out,” signed “Tea Party Patriots.” [5]

I guess no one told her that the Tea Party movement is just a bunch of racist white guys.

I didn’t realize until this week that N.Y. doesn’t just host a Gay Pride Parade. No, they actually have an entire Gay Pride Weekend, and part of the festivities this year included what the N.Y. Times called “a drag parade on Friday.”

I think we can fully expect the “transgendered rights” movement to ratchet things up in the months ahead in an attempt to leverage their related cousin’s victory in New York. And yes, they are very closely related, so much so that “cousin” may be way too distant.

For instance, according to the National Center for Transgender Equality, “gender” is nothing more than “the societally-determined characteristics of a par­ticular sex.” No room for the objective truth, “male and female He created them,” here.

Perhaps the saddest thing these causes have in common, however, is the fact that the unfortunate people who consider themselves “transgendered” are largely being left to suffer as progressive do-gooders turn a blind eye to their plight while congratulating themselves for their “open-mindedness.”

According to a recent NCTE survey, “A staggering 41% of [transgendered]respondents reported attempting suicide compared to 1.6% of the general population.”

Yet, God forbid anyone should be so “intolerant” as to suggest that “transgendered” people are suffering from an illness and deserve something more substantial in the way of treatment than some liberal chirping in their ear about how O.K. they are.

Perhaps I’m turning cynical, but it sure seems to me that the landscape as it concerns the gay agenda is going to get a whole lot rockier before it gets any smoother; that is if, in fact, it ever does. In any event, one thing seems certain; the battle for the heart and soul of American culture vis-à-vis the “gay rights” movement has really only just begun.

As the N.Y. Times reported from the victory celebration at the Stonewall Inn following the same-sex “marriage” debacle:

“We’re there, finally, but we’re not all the way there; this is only one step,” said a man dressed in drag who identified himself as Lady Havoc, standing in front of the historic bar.

Yes, the forecast is calling for continued havoc, so stay tuned.