Trending Now
You are at:Home»Featured»To Hell With Halloween
By Trent Beattie on October 31, 2016 Featured, Live in Christ 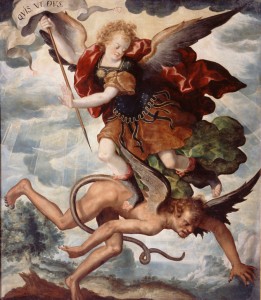 Twenty-four years ago on Halloween, 42-year-old David Arias began a journey to hell. Ouija boards, drugs, assaults and sacrilege were a regular part of his life. After nearly four years of engaging in extraordinary evil in the pursuit of power, Arias had enough and slowly began to turn back to God for salvation.

After an initially grueling conversion, Arias now finds living in the Catholic Church to be quite normal. He is married with three children and participates in an apologetics group called Prophets of Hope and a men’s group called Cristo Rey, both at his parish in southern California. Arias, who is no fan of Halloween, spoke of his experiences in the occult with Register correspondent Trent Beattie.

How did you first get involved with the occult?

I grew up in a culturally Catholic home, but we didn’t take our faith very seriously. This wasn’t a good foundation for when my mother died when I was 16. Her death hit me hard, and I couldn’t believe in a loving God after that. Whenever someone said, “I love you,” it fell on deaf ears because of the sadness and anger inside me.

When I was 18, I went to a rock concert with some friends on Halloween. Afterward, one of them invited me to a cemetery to use a Ouija board. I went and saw the first obvious manifestations of evil there. I thought it was scary but also funny. I was like a little kid playing with fire: It seemed like a game to me, and part of what made it fun was how dangerous it was.

That beginning led to “underground parties” in empty warehouses. There was rock music, drugs and secret rituals in “special places” of the warehouse. The organizers downplayed the rituals, trying to make them seem normal, but they were actually Satanic. Evil was being invited into the bodies and souls of the unsuspecting partiers.

Through these parties I got deeper into the dark world of Satanism. I learned that Satan wants to be like God, so he requires sacrifices to be offered to him. The most basic and common sacrifices were of animals. I participated in these and other evil rituals for almost four years, but I could not bring myself to kill a human being, which is required to make it to the highest (or, I guess you could say, the lowest) level of Satanism.

The easiest way to kill someone is through abortion because the baby has no defense. You can kill babies anytime you want in this country, as long as they’re still inside the womb. We had an abortionist in our group who knew exactly what abortion was about: sacrificing innocent lives to Satan. Abortion is an anti-sacrament.

How did you get out of Satanism?

When I couldn’t kill a human being, others in my group got angry and beat me up. They wanted to push me further into hell, but I wasn’t willing to go. I wanted to belong and have more power, but I also saw that killing another human being was extremely immoral. This is taken for granted by most people, but when you consider all the other evil things I had done, killing a human being would be the next step. I thank God that he prevented me from taking that step.

This was an insightful but painful time. The tension made me desperate and suicidal, which is where Satan wants us to be. Suicide is known in Satanic circles as “auto-sacrifice” or “self-sacrifice.” Satan is “honored” by suicides because they are a mark of despair. Judas killed himself because evil seeks to destroy goodness; but in the end, it destroys itself.

Even though I was walking around with a huge burden of sin, I still held out hope that things could get better. I walked past a Catholic church whose doors were open. I looked inside and saw a very large crucifix: I said, “Jesus, what can you give me that Satan can’t?” That was a challenge to God, but it was a sincere one.

I cried and cried and cried. Then God answered my prayer. I saw that I needed to be forgiven by Jesus through his Church, both of whom I used to persecute. My confession lasted an hour and a half; and later I was prayed over by an exorcist. I was relieved to be freed from evil, and I began to joyfully receive holy Communion.

I was also introduced to the Rosary, a set of prayers every Catholic should pray. Mary has authority over Satan, whose head she crushes, as described in Genesis. Satan is totally powerless against Mary because she has no sin. All Satan’s power rests in how much we sin. The more we sin, the more powerful he becomes; but since Mary never sinned, he cannot do anything against her.

What is your opinion of Halloween?

It’s no coincidence that Halloween was when I started down the road to hell. This is a special day for darkness, and it shouldn’t be treated as a game, like I did. It is a demonic celebration used as a tool to gain souls for hell.

You know those Halloween stores that pop up every fall? We would curse the costumes children would get from them — even the costumes that weren’t grotesque. Parents thought all was well, but we knew they were paying to have their children step into a world of darkness.

Besides the art, which would be up all year, what do you think Catholics should do on Halloween specifically?

On Halloween, it is especially good to go to Mass; do Eucharistic adoration; pray the Rosary and Divine Mercy Chaplet; fast from food for six hours or fast from something else for a specific amount of time; read the Bible; teach your children about the Church; donate something to the poor, etc. These can be done any day of the year, but it’s easier to see the purpose behind it on Halloween, when so many people are going the opposite direction of where they should be.

What are the good things that Catholics should remember about the spiritual battle?

The biggest thing is to know you’re in the right place. Our Lord and Savior, Jesus Christ, started our Church, and he lives in our Church today, especially through the Eucharist. He loves to be with us and give us his graces. Considering this extraordinary love coming from Jesus, it’s terribly ironic that not every Catholic knows Jesus is truly present in the Eucharist, but every Satanist does.

Many years ago, when I was in Satanism, we would send people out to slip into Mass late and get a consecrated Host for sacrilegious rituals. We even had regular parishioners who would sign up as extraordinary ministers of holy Communion and steal hosts. It happened all the time. It was so easy because so many people are given access to the tabernacle. If so many people have access, what’s the big deal with it, right?

As Catholics, we need to enliven our faith in the real presence of Jesus in the Eucharist and show it by how we receive him. Being dressed immodestly or talking with our friends as we stroll up to the sanctuary is not acceptable. Neither is tossing Jesus into our mouths and running out of the church.

If we want to receive Jesus reverently, we should ask the Blessed Mother how to do it. She was the first to receive Jesus, and she knows better than any other creature what Jesus expects from us. See, then, why the Rosary should be prayed daily by all Catholics? Mary has power that is only surpassed by that of the Father, Son and Holy Spirit.

What would you say to people attracted to the occult or who have already gotten into it?

The Good and Bad Thieves died the same death physically, but, spiritually, they were a world apart. The Bad Thief was proud and rejected his cross, but the Good Thief was humble and accepted his. This act of faith led him to paradise.

My heart was broken when I was 16, and I took the pain as motivation to break the hearts of others. I did inflict pain on many people; but each time, I was only adding to my own share. Highs were followed by desperate lows, but when I repented of my sins, I did find the way to happiness.

At 23, Jesus and Mary put my broken heart back together, and they want to do the same thing for others. They only have to ask. They need to know that love is real, mercy is real, and forgiveness is real. While Our Father does hate our sins, he hates none of us. He wants all of us to be saved, and our salvation is there for the asking. Let’s all ask for it daily and praise the Lord and rejoice in anticipation of heavenly glory.