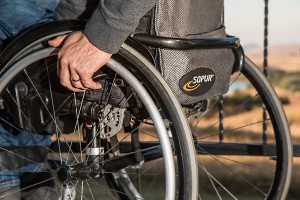 I was diagnosed with an aggressive form of multiple sclerosis (MS) in 1984. In the early 1990s a Canadian woman with ALS tried to introduce to Canada a thin edge of a deadly wedge of physician assisted suicide.

Sue Rodriguez was an active campaigner from her wheelchair. “Whose body is this anyway?!” she said. I remember her saying that she wanted the option of having assistance in her suicide … and by extension, for people with incurable illnesses and serious disabilities.

The Canadian  media jumped on the hearse bandwagon and pushed for the nation’s law against assisted suicide to be struck down, under the guise of news. Columnists decried the cruelty of a law that prohibits assisted suicide for those who can’t do the deed by their own hand due to disability.

Some media boneheads even went so far as to say if able-bodied people had a right to commit suicide, why not the disabled? Huh? Just because there was no law against suicide did not mean there was a right to suicide.

I remember thinking to myself “Sue Rodriguez does not speak for me!” — and so I decided to write a one page letter to Canada’s Justice Minister. It was the early 1990s when people still wrote letters and mailed them. Remember that? My one page letter turned into an 18 page position paper.

That began more than 20 years speaking across North America against assisted suicide and for creating environments of support, welcome and inclusion for people with serious diseases and disabilities.

I have been espousing Christian outreach to counter despair and defeat that leads people to give up on life — the incurably ill and disabled are indispensable members of their communities.  We need to lift them up even if they want to be put down.

This is counter to Canada’s 21st Century death affirming culture. Self-described “progressives” advocate the freedom to choose abortion for unwanted preborn children. They espouse assisted suicide for suicidal sick and disabled people but suicide prevention for the healthy an able-bodied.

Apparently that’s “progressive”. I call it regressive, going back to previous barbaric dark ages when the weakest and most vulnerable were killed.

And so Christians are clearly in a minority, swimming against the current of prevalent thought. We espouse the sanctity of every human life while Canadian officialdom espouses the choice to kill one’s self or our unwanted unborn children.

Let me remind you that throughout history Christians have been at odds with the world in which they lived and were persecuted to the point of death. If the world hated Christ, we should expect to be hated too. Our real citizenship is not here.

Stand up for the kingdom of heaven and God’s love for every human being. Witness to the salvation of Jesus Christ. Let your candle of faith and action be a light in the darkness.

* The coarsening of Canada’s collective conscience to accept medical killing of the disabled and incurable ill would take another 20 years. Medical assisted suicide was legalized in Canada in June 2016.