Trending Now
You are at:Home»Featured»ACLU Attempting to Criminalize Christianity: ‘Communism is the Goal’
By J. Matt Barber on March 25, 2011 Featured, Law & Justice 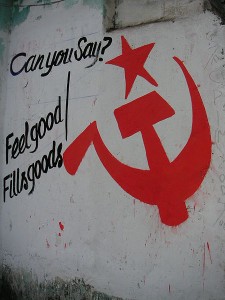 Irony is defined as “the use of words to convey a meaning that is the opposite of its literal meaning.” The term doublespeak means “evasive, ambiguous language that is intended to deceive or confuse.”

There is perhaps no greater example of ironic doublespeak than inclusion of the phrase “civil liberties” within the inapt designation: “American Civil Liberties Union.”

Indeed, few leftist organizations in existence today can compete with the ACLU in terms of demonstrated hostility toward what the Declaration of Independence describes as “certain unalienable rights” with which Americans are “endowed by their Creator.”

Consider the doublespeak inherent throughout the “progressive” Goliath’s flowery self-representation:

The ACLU is our nation’s guardian of liberty, working daily in courts, legislatures and communities to defend and preserve the individual rights and liberties that the Constitution and laws of the United States guarantee everyone in this country.

I am for socialism, disarmament, and, ultimately, for abolishing the state itself… I seek the social ownership of property, the abolition of the propertied class, and the sole control of those who produce wealth. Communism is the goal.

Ironic, isn’t it? So much for “life, liberty and the pursuit of happiness.” By combining straightforward segments from each ACLU rendering we arrive with an accurate portrayal. One that cuts through the doublespeak:

The ACLU is…working daily in courts, legislatures and communities. Communism is the goal.

In 1931, just eleven years after the ACLU’s inception, the US Congress convened a Special House Committee to Investigate Communist Activities. On the ACLU it reported:

The American Civil Liberties Union is closely affiliated with the communist movement in the United States, and fully 90 percent of its efforts are on behalf of communists who have come into conflict with the law. It claims to stand for free speech, free press and free assembly, but it is quite apparent that the main function of the ACLU is an attempt to protect the communists.

To be sure, the “main function of the ACLU” is entirely counter-constitutional.

A shared objective between both Communism generally, and the ACLU specifically is the suppression of religious liberty; principally, the free exercise of Christianity.

Karl Marx, high priest of the ACLU’s beloved cult of Communism, once said: “The first requisite for the happiness of the people is the abolition of religion.”

Even the ACLU’s own promotional materials overtly advocate religious discrimination: “The message of the Establishment Clause is that religious activities must be treated differently from other activities to ensure against governmental support for religion.”

The First Amendment’s Establishment Clause — a mere 10 words — says nothing of the sort. Its message is abundantly clear, requiring severe distortion to stuff within the ACLU’s Marxist parameters. It merely states: “Congress shall make no law respecting an establishment of religion…” That’s it.

Now let’s break it down. What do you suppose the Framers of the US Constitution — a document expressly designed to limit the powers of federal government — intended with the word “Congress”? Did they mean State government? Municipal government? Your local school district? Your third grade teacher?

Of course not. They meant exactly what they said: Congress. As in: The United States Congress! It takes someone with a distinctly disingenuous ulterior motive to derive anything else.

Now what did they mean by “…shall make no law respecting an establishment of religion?”

Well, in a letter to Benjamin Rush, a fellow-signer of the Declaration of Independence, Thomas Jefferson — often touted by the left as the great church-state separationst — answered that question. The First Amendment’s Establishment Clause was singularly intended to restrict Congress from affirmatively “establishing,” through federal legislation, a national Christian denomination (similar to the Anglican Church of England).

Or, as Jefferson put it: “[T]he clause of the Constitution” covering “freedom of religion” was intended to necessarily preclude “an establishment of a particular form of Christianity through the United States.”

How far removed we are today from the original intent of our Founding Fathers. The ACLU is largely responsible for creating the gulf between the Constitution’s original construction and its modern misapplication.

The ACLU remains one of America’s most powerful secular-socialist political pressure groups. It relentlessly tramples underfoot the First Amendment, which guarantees sweeping and absolute liberty for all Americans — including government employees — to freely exercise their faith both publicly and privately without fear of reprisal: “Congress shall make no law respecting an establishment of religion, or prohibiting the free exercise thereof.”

Examples of its constitutional abuses are manifold, but one of the most recent involves an ACLU assault against a group of Christians in Santa Rosa County, FL. Liberty Counsel represents those Christians.

An ACLU-crafted Consent Decree has been used as a weapon to threaten school district employees with fines and jail time for merely praying over a meal, and for exercising — even while away from school — their sincerely held Christian faith. You read that right. The ACLU is literally seeking to criminalize Christianity.

In August of 2009, Liberty Counsel successfully defended staff member Michelle Winkler from contempt charges brought by the ACLU after her husband, who is not even employed by the district, offered a meal prayer at a privately sponsored event in a neighboring county.

Under the Consent Decree teachers are considered to be acting in their “official capacity” anytime a student is present, even at private functions off campus.

Teachers cannot pray, bow their heads, or fold their hands to show agreement with anyone who does pray. Teachers and staff cannot ‘Reply’ to an email sent by a parent if the parent’s email refers to God or Scripture. Teachers either have to delete such references from the original email or reply by initiating a new email. Teachers and staff are also required to stop students from praying in their own private club meetings.

During witness testimony, Mrs. Winkler sobbed as she described how she and a coworker, who had recently lost a child, literally had to hide in a closet to pray.

Judge Rodgers concluded that even though “a preliminary injunction is an extraordinary and drastic remedy,” one aspect of the Consent Decree — its attempt to prohibit school employees from fully participating in private religious events — is so flawed that it must be immediately halted.

The Court thus enjoined the School Board “from enforcing any school policy that restrains in any way an employee’s participation in, or speech or conduct during, a private religious service, including baccalaureate” pending a trial on the merits.

“Progressives” are nothing if not consistent. As they gain confidence, they invariably rush across that bridge too far. They engage wild-eyed efforts to “fundamentally transform America” to reflect their own secular-socialist self-image.

I’m certain that both the bare-knuckle spirit of the American people and Liberty Counsel’s enduring 92 percent win record against the ACLU will maintain a durable safeguard – an “impenetrable wall of separation” if you will – between our constitutionally guaranteed liberties and a subversive “progressive” agenda built upon the distinctly un-American creed: “Communism is the goal.”