Trending Now
You are at:Home»Featured»Activist Claims Crosses at Catholic U. are Sign of ‘Malice’ Towards Muslims
By Kathleen Gilbert on October 28, 2011 Featured, Law & Justice 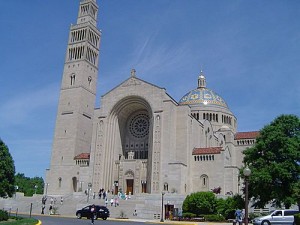 A DC-area legal activist has filed a federal human rights complaint against the Catholic University of America (CUA) for acting “probably with malice” against Muslim students for having Catholic imagery in all of its rooms that would hinder Muslim prayer – though the school says it has never heard a complaint from the students themselves.

John Banzhaf, a George Washington University Law School professor who has a history of filing suits to promote agendas on such topics as childhood obesity and tobacco, filed the complaint with the Washington, D.C. Office of Human Rights, Fox News’ Todd Starnes reports. Banzhaf is the same activist who filed a lawsuit against CUA president John Garvey last month for transitioning the college out of co-ed dorms, which he also called a human rights violation.

“It may not be illegal, but it suggests they are acting improperly and probably with malice,” said Banzhaf about the religious imagery in classrooms. “[Muslims] do have to pray five times a day, they have to look around for empty classrooms and to be sitting there trying to do Muslim prayers with a big cross looking down or a picture of Jesus or a picture of the Pope is not very conductive to their religion.”

Media coverage of the filing has already distorted the event as a complaint from the Muslim community. Although the Fox article headline states that “Muslims say crosses at Catholic University violate ‘human rights,’” CUA released a statement noting that the complaint does not actually come from any CUA student, but “a professor unaffiliated with Catholic University.”

Starnes notes that part of the complaint mentions that Muslims had to pray at the school’s chapels “and at the cathedral that looms over the entire campus – the Basilica of the National Shrine of the Immaculate Conception.” The same phrase appears in a Washington Post article from December 2010 that noted CUA’s refusal to authorize a Muslim group despite a growing number of affiliated students, as opposed to more liberal Catholic campuses where such groups are allowed, such as at Georgetown University.

The Post article, which interviewed several Muslim students, found none of them critical of CUA’s attitude towards their faith, and many of them complimentary. One student said his Islamic faith had matured for the better amid the welcoming campus culture.

A spokesperson for the Office of Human Rights told Fox that the investigation based on Banzhaf’s 60-page complaint could take as long as six months.

Patrick Reilly of the Catholic university watchdog group Cardinal Newman Society told Fox that the complaint was an attack, not a defense.

“This attorney is really turning civil rights on its head,” Reilly said. “He’s using the law for his own discrimination against the Catholic institution and essentially saying Catholic University cannot operate according to Catholic principles.”

Thomas Peters of CatholicVote.com and the American Papist blog noted that, while the complaint seemed outlandish, the climate against religious freedom in Washington may be fatal. “Normally I would have confidence that this lawsuit will be deemed without merit, but the way things are going these days, I just can’t be sure anymore,” he wrote.