Trending Now
You are at:Home»Columnists»“Amazing Grace” – Can You Sing It?
By Heidi Hess Saxton on April 19, 2011 Columnists, Featured, Live in Christ 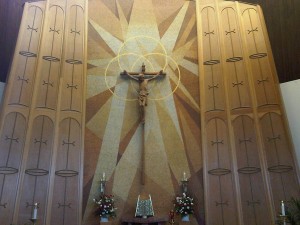 At this year’s Easter Vigil, I get to celebrate my 17th birthday as a Catholic Christian. Seventeen years ago I officially began my faith journey as a Catholic Christian, with the blessing of Cardinal Mahoney and my faith community at Holy Family Catholic Church in South Pasadena, California. So every year at this time, I find myself reflecting on what I’ve learned so far. This year, I’ve been thinking a lot about the mercy and grace of God.

Sarah was a little over two years old when my husband and I took her to the baptism of her cousin, whose family is Lutheran. We had arrived late, and managed to find two seats in the back by crawling over the laps of two pinch-lipped elderly matrons, who clearly disapproved of our being there at all.

The sermon that day went a little long, and Sarah grew bored. We passed her back and forth, feeding her Cheerios and turning pages of board-books. One of them contained a large picture of Jesus, and when we reached that page, Sarah found her voice.

“Ama-sing gwace, ah ee ah ah…” she began. I hushed her. Instead she grew louder.  As I hastily gathered our things to make a speedy retreat, Sarah let out a few more garbles, followed by a big finish. “Wah spine, hah ow I-meeeeeee!”

I thought the old ladies’ eyes were going to pop out of their sockets. I was just glad to get my daily dose of humiliation out of the way so early in the day. (Hah.)

While some Catholics denounce singing songs like “Amazing Grace” in a Catholic Mass, calling them “unsingable” or “Protestant,” I disagree. In fact, such “Protestant” songs took on fresh meaning for me once the full light of faith shone upon them.

I grew up in a church in which hymn singing was a highly formative occupation, theologically speaking (that and “Bible drills” in Sunday school). These songs are an important part of my spiritual heritage; they express truths about life and faith in God that can enrich any community of faith. The question should be not whether the origins of particular songs are “Protestant,” but whether the ideas expressed are true.

By virtue of baptism, all Christians are part of the Body of Christ (though some are united imperfectly). Consequently, even those who have not yet embraced the fullness of the faith are capable of teaching us something about the spiritual life. Because of their love for the Word of God, and their familiarity with it, Protestants have written hymns that are saturated with themes and metaphors from the Bible. For that reason alone, they can be sacramentals of grace for us.

Can be, that is, if we do not ourselves fall prey to the sin of that is at the root of all theological error: spiritual and intellectual pride. This pride prevented the Protestant Reformers from submitting to the authority of Rome and the teaching of the Fathers. This prideful spirit also produced spiritual “blinders” that initially made it very difficult for me to embrace the truths of the Catholic faith. I’ve since learned this is a problem for many believers “crossing the Tiber.”

Consequently, for many of us, conversion transpires only after this root of pride has been systematically weeded out.  How?  God in His mercy humbles us, forcing us to return to a childlike state of acceptance and humility as we journey toward the Vigil. One way or another, we learn that the gateway to the Kingdom is so low, we must enter on our knees.

From this childlike state, I found that the hymns of my childhood took on new meaning.

“T’is grace that taught my heart to fear,
and grace that fear relieved.”

Grace That Fuels the Leap of Faith

As I progressed through RCIA, I came to understand that grace is not dependent on feelings, or even on our awareness of it.

The graces of baptism operate in that young soul, and continue to operate into adulthood regardless of whether any change is apparent. As we grow older, it is this grace that enables us to mature in faith. As we continue to learn, it is grace that illuminates the intellect, and teaches us about God’s power and his mercy (fearful heart vs. relieved heart). Only in hindsight do we realize what a gift God’s grace has been.

“How precious did that grace appear, the hour I first believed.”

I sang this line with even greater fervor as a Catholic than I did as an Evangelical Christian. It was God’s grace — nothing more, nothing less — that enlightened my mind and heart to receive the fullness of the truth, and caused me to believe that the Catholic Church was truly the Church founded by Christ. It took more than simple intellectual reflection. It required a paradigm shift of the will and the heart. It took a true leap of faith, which was only possible by “amazing grace.”

“Amazing grace, how sweet the sound that saved a wretch like me!
I once was lost but now am found, t’was blind but now I see.”

Unfortunately, this spiritual blindness and intellectual pride afflicts Christians on both sides of the church divide, preventing some of us from experiencing all the joy and life God wants to give us, a joy rooted in truth, and watered with humility and faith.

So next time you hear the song, go ahead and sing about that Amazing Grace!

Heidi Hess Saxton entered the Catholic Church at the Easter Vigil in 1994, and will always be grateful to her faith family at Holy Family Catholic Church in South Pasadena, California, who helped her along the journey.

To write this article, Heidi took a break from thesis writing, after which she will have a Master of Theology degree at Sacred Heart Major Seminary in Detroit. She and her husband Craig live in southern Michigan with their two children. Her blog is the Extraordinary Moms Network.