Trending Now
You are at:Home»Featured»Army General: ‘Where Were the Churches’ in DADT Fight?
By Kathleen Gilbert on October 14, 2011 Featured, Life Issues & Bioethics 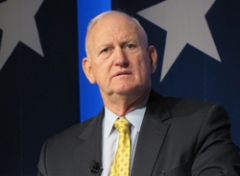 One of America’s most seasoned war generals expressed frustration at the silence of Christian churches as the U.S. military’s ban on open homosexuality fell to a repeal effort earlier this year.

At the Values Voter Summit on Saturday, Lieutenant General Jerry Boykin described the exasperation of pro-family leaders in Washington who found themselves abandoned by church leaders unwilling to make a stand for the “Don’t Ask, Don’t Tell” policy. Boykin, who spent the majority of his career in the Special Forces, was mission commander of the battle portrayed in the Hollywood movie “Black Hawk Down,” and accepted the surrender of Panama military dictator Manuel Noriega in 1989.

According to Boykin, “nobody in this country fought a greater fight” against normalizing homosexuality in the military than Family Research Council President Tony Perkins, himself a former Marine who joined forces with senator and fellow veteran John McCain.

“The answer was, they were silent. The church was silent.”

Besides a large number of military chaplains, few church leaders in America spoke up publicly against the Obama administration’s campaign last year to pass the repeal in Congress.

Notably, while the Vatican had released a statement in 1992 supporting a ban on open homosexuality in the military, the U.S. Conference of Catholic Bishops remained silent on the repeal effort, leaving military Archbishop Timothy Broglio to defend the ban alone. When questioned on the controversy in December 2010, Washington’s Cardinal Donald Wuerl demurred, saying “there isn’t a specific Catholic Church position” on the issue.

Boykin, a former Deputy Undersecretary of Defense for Intelligence, told his conservative audience, “Christians have to rise up like a mighty army to be the salt and light.”

“Today, the church has lost its moral authority. The church has ceded its authority to the ACLU, and CODEPINK and MoveOn.org. They’re the ones with the real influence today,” he said. The veteran pointed to Europe as a good example of what will happen if America continues to lose sight of its identity as “founded on Judaeo-Christian principles.”

“Europe is hopelessly lost,” he said. “Folks, this could happen in America if we continue to be asleep, if the church does not rise up. The church has to get back to the fundamentals … of the gospel of Jesus Christ.”

“We have to stop compromising on the gospel of Christ because … we’re afraid somebody’s gonna be offended. Let me tell you something: when the Gospel of Jesus Christ offends people, that’s exactly when they need to hear it.”