Trending Now
You are at:Home»Featured»Dad Behind Viral ‘I am the 10%’ Down Syndrome Image Speaks Out
By John Jalsevac on November 1, 2011 Featured, Life Issues & Bioethics 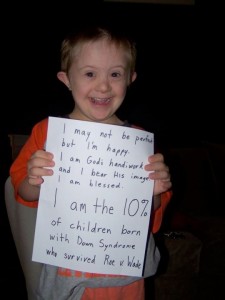 In the past week a powerful pro-life photo featuring a child with Down syndrome has started circulating around Facebook. The image shows the smiling child holding a sign declaring that he is the “10%” of children with Down syndrome who managed to survive abortion after Roe v. Wade.

“I am God’s handiwork and I bear his image,” reads the sign. “I am blessed.”

Already the photo has been shared across the social networking site many thousands of times, prompting hundreds of supportive comments. But most who have done the sharing or the commenting have had no idea who the child was, or where the photo came from.

Today LifeSiteNews tracked down and spoke with Andy Reigstad, the creator of the photo, asking him about the story behind it.

Reigstad told LSN that he has been completely taken aback at the attention that the photo is getting. “We’re just thankful that it’s touching a lot of people, opening a lot eyes,” he said.

Reigstad explained that the boy in the photo is his son Boaz, the eldest of his and his wife’s three children. Boaz, who his father describes as “a high functioning child with Down syndrome,” will turn six years old this Sunday, October 30th.

“My wife and I would be considered very pro-life and have been praying for the Lord to end abortion much like He ended legal slavery in our land,” Reigstad said. “We’ve supported local Pregnancy Help Centers in the cities we’ve lived in and we take part in their fundraisers. Lives are saved from the abortionists each day, but still the killing goes on and it grieves our hearts.”

The idea for the photo of Boaz occurred to Andy and his wife a week ago, after watching the pro-life movie “180” and reading about the Occupy Wall Street movement, which has protesters declaring that they are the “99%” of Americans who are not extremely wealthy.

“In writing the sign we wanted to let people know that though our son is not perfect (nor are any of us), he is happy and his life is worth living,” Reigstad said.

“We had hoped that this photo might be a small part of the tide that is turning against abortion. We wanted to speak up for those who can’t speak up for themselves.”

The photo’s release in October coincides with National Down Syndrome Awareness Month.

After Reigstad posted the photo to his Facebook page last Saturday, he was shocked at how fast it started circulating. “I’m not a major [Facebook] user,” he said, “but by Sunday morning it was close to 500 [shares], then over a thousand on Monday, and I don’t even know what it’s at now.”

As for the positive effect that this photo might be having, Reigstad says: “We want God to get all the glory as we humbly speak of His greatness and goodness in granting life, especially human life at the point of conception.”