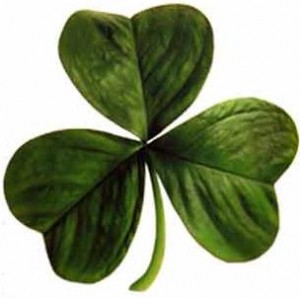 It’s St. Patrick’s Day, March 17, and everyone is Irish today — if not in fact, at least in spirit.  Come on now, don’t be an old Druid!  Regardless of your nationality, St. Patrick is a saint for everyone.

It’s not just because I’m half Irish or that my parents named me after St. Patrick, that I love him so much. Nor is it because I’m from the Detroit area where St. Patrick’s Day is practically a national holiday.  It’s not even because my dad’s parents were from Ireland and I visited the Emerald Isle myself while I was in college.   I’ll tell you why I’m such a big fan of St. Patrick and his feast day but first let me clear up a few things.

Just as the Easter Bunny and Santa Claus have hijacked religious holidays, (to a certain extent) so too St. Patrick’s Day has its impersonators and traitors.

Here are a few things that don’t represent St. Patrick and what he was about:  Leprechauns, green beer, a pot of gold at the end of the rainbow and a shamrock as a good luck charm. As a matter of fact, the saying, “The luck of the Irish” has nothing to do with St. Patrick.  Luck is about chance or even superstition. And superstition is what St. Patrick preached against.

St. Patrick is recorded as being born in 387 and dying on March 17, 461.  Ironically, St. Patrick, who we associate with all-things Irish, was not Irish himself, being born in the Roman-held Britain.  Two letters, which are generally accepted as written by Patrick, provide some information about his life.  These letters are known as Declaration  (Confessio in Latin), which includes a short account of his life and mission, and the Letter to the soldiers of Coroticus (Epistola).

When Patrick was a teenager, he was kidnapped by a raiding party and taken to Ireland where he became a slave; working as a shepherd for a harsh master.  During this time, Ireland was a land of pagans ruled by a King and influenced by Druid practices.

As a captive, Patrick learned the language and came to understand the beliefs of Druidism, but he turned to the faith of his parents for strength. In his writings, he spoke of praying throughout the day, of his growing faith and the spirit becoming fervent within him.

After six years, when he was around 20 years old it is recounted in Confessio that a voice spoke to Patrick in his sleep, telling him to escape and that a ship awaited him:

And it was there of course that one night in my sleep I heard a voice saying to me: “You do well to fast: soon you will depart for your home country.” And again, a very short time later, there was a voice prophesying: “Behold, your ship is ready.” And it was not close by, but, as it happened, two hundred miles away, where I had never been nor knew any person.  And shortly thereafter, I turned about and fled from the man with whom I had been for six years, and I came, by the power of God who directed my route to advantage (and I was afraid of nothing), until I reached that ship.”

Though that ship was 200 miles away on the coast, Patrick attributed God’s providence with leading him to it. But when he arrived penniless, the captain refused to let him on board. Patrick left to go pray and a short time later one of the sailors called to him to come on board after all.

The voyage was difficult in many ways but no doubt it was a happy reunion among friends and family who must have spend many a sleepless night fearing for his well being.  Although the trial of his servitude was over, the flame of Patrick’s love for God continued to burn brightly.  He entered the priesthood. Ireland had planted herself in Patrick’s heart, however. He had visions of the children pleading for him to return.  Patrick requested that he return to Ireland.  Pope St. Celestine I agreed to commission him with this assignment, which ultimately rocked the Irish world with ripples that continue into the twenty-first century.

When Patrick and his companions arrived in Ireland, on March 25, 432 at the mouth of the Vantry River, the Druids wasted no time in raising arms against them.  One legend claims that a chieftain of one of the tribes, tried to kill Patrick, but mysteriously was unable to move his arm. Once he made peace with Patrick, he was again able to move his arm.

Hearing the Gospel message in their own native tongue had a powerful effect on the Irish people. Added to that, Patrick became known for performing miracles. It was on Easter Sunday in a standoff between Patrick and Druidism that Catholicism had her greatest Irish victory.  A decree had gone out the previous day that all fires must be extinguished throughout the kingdom until the signal flame would be started at the King’s castle. Easter coincided that year of 433, with the Druid festival. No fire could burn until the new lighting of the pagan fire, under punishment of death. Patrick went ahead and lit the Easter fire first. The Druid priests warned King Laoghaire that if that fire were not stamped out, it would never be extinguished throughout the land.  The king invited St. Patrick to Tara the next day.

It is said that the Druids and magicians used everything at their disposal to sway the king — incantations, spells, and warnings. A cloud of darkness spread over the area.  Patrick challenged them to remove the cloud but all their incantations failed. Patrick prayed and the cloud lifted, revealing the sun’s bright rays. Legend also has it that the Arch-Druid Lochru was lifted up high in the air and when Patrick knelt to pray, he came crashing down upon a rock, in the sight of all the chieftains that had gathered.  It was this meeting that won over the king and ended the struggle between Catholicism and paganism.

Patrick was granted permission to preach and spread the Catholic faith. He often used the shamrock, which is really a clover with three leaves. The three leaves represented the Holy Trinity: Father, Son, and Holy Spirit.

Using the Irish culture, which Patrick understood so well, he incorporated the Irish customs into his lessons of Christianity. For instance, using a bonfire to celebrate the Easter vigil meshed with the pagan practice of using fires to honor their pagan gods. The Irish Celtic cross has the sun superimposed onto a traditional cross because the sun was seen as a powerful Irish symbol. Patrick became one with the Irish and through his love of them and the love of the Catholic faith all became one in Christ.

His spectacular success at replacing the pagan druidism with Catholicism, has won a great love and devotion among the Irish people. Wherever the Irish have immigrated, they have brought this love with them and thus, St. Patrick’s Day is celebrated throughout the world including Canada, New Zealand, Australia and the United States.

In Ireland, however, it is a national holiday. Most businesses are closed on that day with the exception of restaurants and pubs. The day is considered to be one for spiritual renewal and traditionally begins with Mass. Then afterwards, the celebrations begin. If the day falls on a Friday during Lent, a day when Catholic are obliged to abstain from eating meat, the local bishops often will often lift this restriction in honor of the feast day celebration — St. Patrick is just that important there.