Trending Now
You are at:Home»Featured»New ‘Dr. Death’ Admits to Assisting the Deaths of 300 in U.S.
By Thaddeus Baklinski on July 17, 2011 Featured, Life Issues & Bioethics 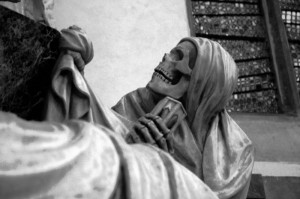 Dr. Lawrence Egbert, the medical director for the Final Exit Network (FEN) euthanasia advocacy organization, has been dubbed the new “Dr. Death,” after he admitted to the media that he and his organization have helped direct the deaths of nearly 300 people across the U.S.

Euthanasia activist Jack Kevorkian, who died in June of natural causes, was the first to earn the title “Dr. Death,” after he claimed to have assisted in the suicides of about 130 people between 1990 and 1998. He subsequently served eight years in prison for second-degree murder after he videotaped himself administering a lethal injection, which video was subsequently aired on national television.

Egbert, however, was quick to point out that he and his organization never directly cause the death of a “patient,” but rather provide “exit guides” who offer advice on how to “hasten death.”

According to the group’s website, FEN believes that people should have the right to kill themselves “when their quality of life is personally unacceptable,” and that suicide should not be restricted in any way “by the law, clergy, medical profession, even friends and relatives no matter how well-intentioned.”

They also state, “We do not encourage anyone to end their life, do not provide the means to do so, and do not actively assist in a person’s death. We do, however, support any member who requests it when medical circumstances warrant their decision.”

According to a Chicago Tribune report, FEN’s preferred method of causing death is an air-tight hood that is placed over a person’s head which is then inflated with helium – a method that leaves no traces behind.

Jerry Dincin, president of the Final Exit Network, said the helium method is “the kindest, quickest” way to die. “This is just another civil right that we have to fight for.”

The Tribune described the case of Jana Van Voorhis, a 58-year-old woman from Phoenix, Arizona, who was approved for “support” by Egbert. “Exit guides” with FEN were present at her death and prompted her to turn on the helium from a tank, which had been bought at a party store. After she was dead (it took about 12 minutes) the “exit guides” removed the hood and helium tank and arranged pillows on her bed so her death would appear natural. The tank and hood were then disposed of in separate industrial park dumpsters.

She was found several days after her death by her brother-in-law, who said that even though Van Voorhis was considered depressed and sometimes delusional (according to a police report, she believed bugs were eating holes in her kidneys, feet, and liver), he was not informed of her decision to kill herself.

“She was 58 years old, and she was in relatively good health,” said Jared Thomas, 66, who found the body. “It was unusual to see someone that age dead in bed, especially when it was made to look so clean and sanitary, like she had died in her sleep.”

Egbert’s methods are controversial even among other right-to-die organizations.

Kathryn Tucker, legislative director for Compassion & Choices, a right-to-die group that advocates for legislative changes to assisted suicide laws, told Newsweek that the idea of someone gagging to death in a helium-filled hood is “ghoulish and frightening.”

Van Voorhis’s death, as well as another in Georgia, led to criminal charges against Egbert and some members of FEN.

According to court records, Hale-Rowe and Massey pleaded guilty, and Langsner’s case ended in mistrial. Dr. Egbert, however, was cleared of all charges.

The Georgia case involved John Celmer who, though under treatment for cancer, was not terminally ill. After he died, his wife Susan discovered receipts for helium tanks, a note referring to his need to acquire a “hood,” an entry on his calendar (May 7, 2008: “Claire here @ 1:30”) that mentioned someone she didn’t know, and other notes referencing the Final Exit Network.

She brought these to the attention of police who launched an investigation that resulted in Egbert and three other members of FEN being indicted on charges of racketeering, assisting a suicide, and tampering with evidence.

FEN president, Jerry Dincin, a retired psychologist who lives in suburban Chicago, said, “It is outrageous that the law enforcement authorities in Atlanta would spend such resources to hunt down and prosecute our geriatric, compassionate volunteers as if they were a threat to society. Don’t they have enough real criminals to chase after?”

The case in Georgia is held up pending an appeal to the Supreme Court of Georgia. Meanwhile, Egbert and the three other members of FEN are free on $60,000 bail apiece.