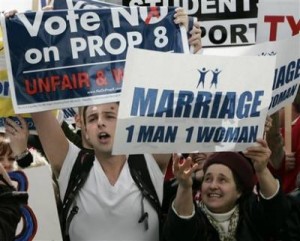 Last week’s hearing in the California Supreme Court on whether the proponents of Prop 8 have standing to defend the measure in court seemed to go well for the defenders of natural marriage. But another issue lies beneath the surface of the court arguments. The issue is what kind of people are the marriage redefiners: Ted Olsen, Rob Reiner, and the American Foundation for Equal Rights?

Is their bid to deny Prop 8 proponents legal standing just the next step in the unfolding of the civil rights movement, as they seem to perceive themselves? I think the evidence from the courtroom shows beyond doubt that we are dealing with something else entirely. These people are bent on obtaining a particular outcome, no matter what the cost to the rest of the legal system. Advocates of minimum government, especially libertarians, should be more than wary about hanging around this type of person: they should avoid them absolutely, and call them out wherever possible.

Proposition 8 is the ballot initiative defining marriage as the union of one man and one women in the California Constitution. In 2008, California voters approved Prop 8, with 51 per cent of the vote, approximately the margin of victory that elected Obama. Since then, celebrity lawyers Ted Olsen and David Boies have brought a suit in the federal courts to argue that Proposition 8 violates the US Constitution.

Please note the high stakes here. If the courts decide that the US Constitution requires the redefinition of marriage that will be the end of the line for debate on the subject in the US. We will have genderless marriage throughout the US, overturning the constitutions of the majority of states.

So, the point at issue in last week’s hearing before the California Supreme Court was whether the proponents of Prop 8 (that is, the group of people who put Prop 8 on the ballot and who are legally responsible for it) have standing to defend the measure in court.

Before I went to San Francisco to cover the Prop 8 trial, I hoped that the marriage redefiners would try to distinguish their case. That is, would they try to come up with some argument that distinguishes the proponents of Prop 8 from proponents of other potential ballot initiatives? If they make no attempt to do that, we might conclude that they don’t care whether they destroy the initiative process. They just want what they want, and they don’t care about collateral damage.

I am sorry, but not surprised, to report that attorney Ted Olsen made no serious effort to create a legal argument that would apply to Prop 8 and not to other ballot measures. As I sat in the jam-packed courtroom, I sensed that the justices were appalled by his cavalier attitude toward the voters. One by one, the justices poked holes in Olsen’s theory.

Justice Carol Corrigan observed that Olsen’s theory would give the Attorney General the right to “pocket veto” any voter initiative. Justice Joyce Kennard noted that to agree with Olsen is to nullify the power of the people. Justice Kathryn Werdegar noted that “we” (meaning the Supreme Court of California) have always given ballot proponents standing in court.

In addition, Chief Justice Tani Cantil-Sakauye noted that this case was the first case in history in which the proponents were the sole defenders of a measure. In past cases, the proponents have stood “shoulder to shoulder” with the Attorney General. She asked what would happen to the state’s interest in a law, if the Attorney General refused to defend it. “Does the state’s interest evaporate?”

Even the newest member of the California Supreme Court, the notoriously liberal advocate of marriage redefinition, Justice Goodwin Liu, balked at the breathtaking claims advanced by Ted Olsen. “Doesn’t it blinker reality,” he asked, to assert that ballot proponents are no different from any other citizen who voted for Prop 8?

This exchange should be a wake-up call to everyone, especially for minimum government libertarians. The behavior of the marriage redefiners in this case illustrates that they are not just another group of citizens with a different opinion. These are people who want what they want without regard to the cost to our overall political and social system. These are not reformers: these are radicals.

Consider this: Ted Olsen and company could have made all their arguments about the unconstitutionality of man-woman marriage without ever broaching the question of “standing”. They did not need to open this particular legal can of worms. Evidently, they are willing to have the court hear only one side of the case, as Justice Chin observed. Justice Chin was visibly appalled by the idea, but Olsen and friends appeared to have no problem with it.

“’Power comes out of the barrel of a gun’ is an absurd rallying cry when the other side has all the guns. Lenin was a pragmatist; when he returned to what was then Petrograd from exile, he said that the Bolsheviks stood for getting power through the ballot but would reconsider after they got the guns.”

Modern American “progressives” used to love the slogan “power to the people” when they thought they could control the people. Now that they are trying to shove something down the throats of the people, the progressives are ready to throw “the people” under the bus, along with the initiative process. Today’s “progressives” are perfectly willing to gut the people’s power of initiative, just to give same sex couples the right to marry.

Interestingly enough, very few such couples actually take advantage of this right in jurisdictions where it is permitted. This suggests that the “freedom to marry” isn’t the only issue at stake here, and maybe isn’t even the main issue. David Horowitz again: “The issue is never the issue. The issue is always the revolution.”

It would take me too far afield to show in this one article why I am convinced that redefining marriage will amount to a massive transfer of power from civil society to the state. Suffice to say for now, that unmooring the concept of parenthood from biology and handing it over to the state, which the redefinition of marriage will surely do, moves parenthood from a natural pre-political reality to a completely artificial creation of the state.

That is not my argument here. My argument here is that the marriage redefiners showed us their cards in the California Supreme Court last week. These are scorched earth people, take no prisoners people. Shame on us if we don’t play our cards accordingly.

This article was first published at Mercatornet.com September 16, 2011.